I thought that my voyage had come to its end
at the last limit of my power,- -that the path before me was closed,
that provisions were exhausted
and the time come to take shelter in a silent obscurity.
...

The quality of mercy is not strain'd.
It droppeth as the gentle rain from heaven
Upon the place beneath. It is twice blest:
It blesseth him that gives, and him that takes.
...

The happiest day- the happiest hour
My sear'd and blighted heart hath known,
The highest hope of pride and power,
I feel hath flown.
...

January 1912, Mzansi brought forth a child
In a harsh political climate
Destined to free her people
Bound to cruel Fate
...

She,
In the dark,
Found light
Brighter than many ever see.
...

Happy the man, and happy he alone,
He who can call today his own:
He who, secure within, can say,
Tomorrow do thy worst, for I have lived today.
...

In Köhln, a town of monks and bones,
And pavements fang'd with murderous stones
And rags, and hags, and hideous wenches;
I counted two and seventy stenches,
...

He was selected
From among the finest
Of all men
To carry the loads
...

When night came, his lips and tongue were parched, while his hand was still as empty as his stomach.
...

The God separated a spirit from Himself and fashioned it into Beauty. He showered upon her all the blessings of gracefulness and kindness. He gave her the cup of happiness and said, 'Drink not from this cup unless you forget the past and the future, for happiness is naught but the moment.'
...

I dreamed kind Jesus fouled the big-gun gears;
And caused a permanent stoppage in all bolts;
And buckled with a smile Mausers and Colts;
And rusted every bayonet with His tears.
...

Apparently with no surprise,
To any happy flower,
The frost beheads it at its play,
In accidental power.
...

Read Poem
Sonnet Xcv:Who Ever Desired Each Other As We Do Pablo Neruda

Who ever desired each other as we do? Let us look
for the ancient ashes of hearts that burned,
and let our kisses touch there, one by one,
till the flower, disembodied, rises again.
...

Where to go for complaint?
When king becomes blind and turn saint?
When kingdom is handed over to wolves
Whole mystery surrounds and treachery involves
...

'Come and hire me,' I cried, while in the morning I was walking on the stone-paved road.
Sword in hand, the King came in his chariot.
He held my hand and said, 'I will hire you with my power.'
But his power counted for nought, and he went away in his chariot.
...

Do you love God, do you seek God, do you pray every day?
Do you have any clue, what to your Lord you say?

From Oblivion: To die is powered!
as To live is genuine power,
custody of potency speaks…
This is what I have been structured
...

author notes: my writing is called philosophical writing. i only uses middle ages words, words liked gracious, extravaganza, etc… this poem is about a skill is a skilled man power. i don't add capitalization's on my writing.

Power, sheer power
Don't be at ease
Power is not at the hour
What we think it is.
...

Power is power
At the root of doing something,
Break it up
The power it can accept,
... 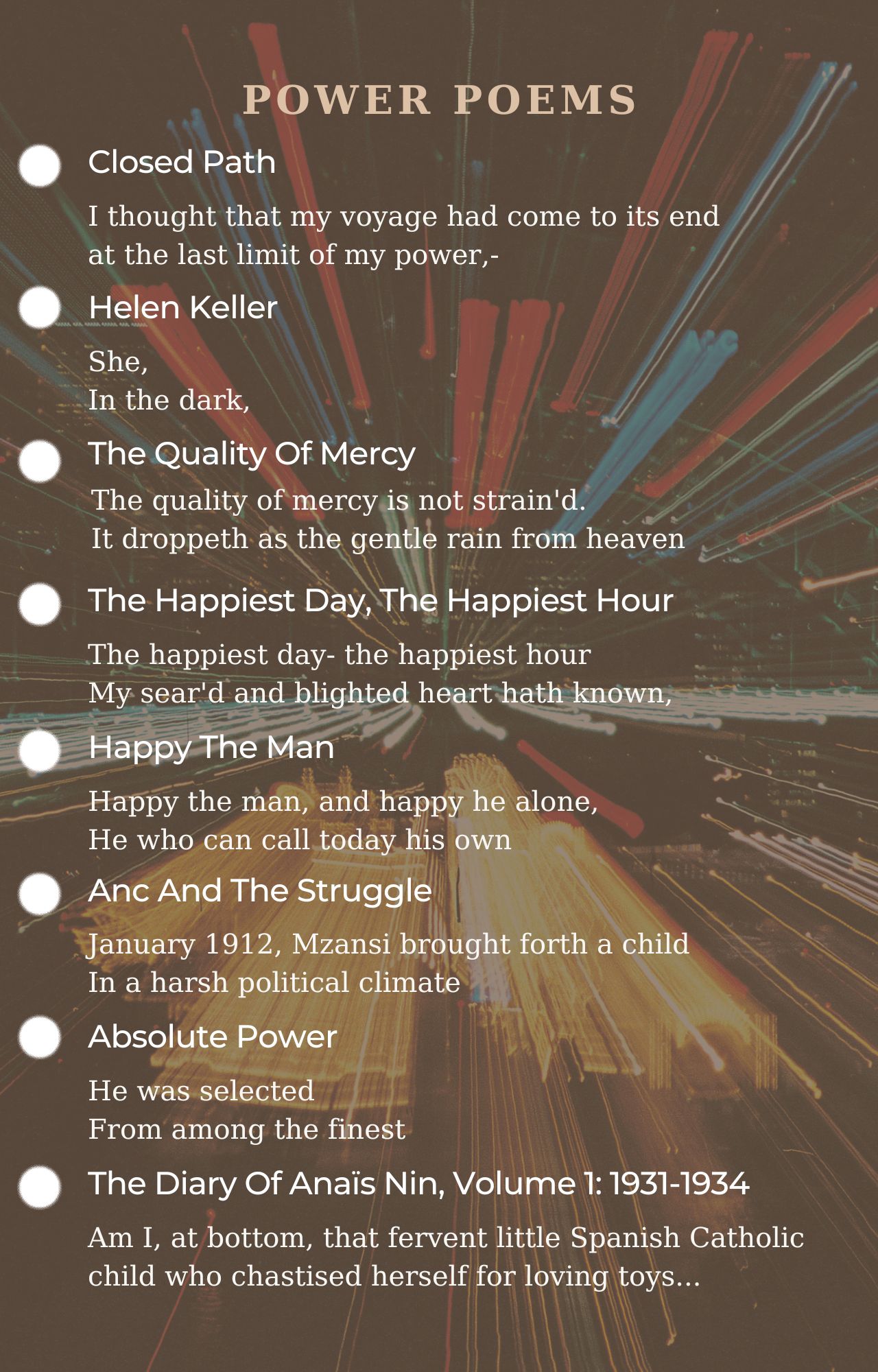