There was much talk about James K. Baxter's commune
in Wanganui then. Many disliked having the refuge
for young people who were misfits and addicts
on their back doorstep; but some liked it.
Baxter offered them hope to come off substances,
and turn their lives around, partly successful.
Jerusalem was a Maori village forty kilometres
north of Wanganui: it was on the River Road,
which I drove along one Saturday, hoping
to meet the poet and then look around town.
The local Maori people (tangata whenua)
had given Jima home near the marae
and the Catholic church, which he appreciated.


The poet was away the day I called, giving me time
to stroll around the remote village, time to reflect
on the river and climb the steep hillside.
It was there that I found James K. Baxter's grave
some years later, inscribed just 'Hemi'. 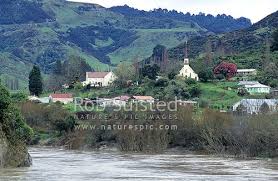 Michael Walker
Sunday, November 4, 2018
Topic(s) of this poem: poet
poem poems river November
Download image of this poem.
Report this poem
POET'S NOTES ABOUT THE POEM
This happened in 1971. Many Wanganui people did not like the commune at all, but some did. Baxter was living a very basic lifestyle then, wearing tattered clothes, sandals but no shoes, with a long beard. Yet he claimed he was happy living out poverty as Jesus did. One critic, Father Frank McKay, said of him after he died, in response to a question on television, 'He seemed content with life and happy enough to me'. Later McKay changed his mind: 'That is not the answer I would give today. He often looked worried, frowning, and seldom happy with life'.
The Wellington newspaper, 'The Dominion', headlined its story of Baxter's death thus: 'James K. Baxter Friend 1926-1972'.
Glossary of Maori terms: Hemi-James. Kia ora-Hello. Good day. Haere mai, nau mai-Welcome to you. Haere ra-goodbye, farewell. Ta
ku hoa-my friend. Kuhu mai-Come inside. Tangata whenua-people of the land, hosts. Marae-a meeting house for socializing, dining, Maori oratory, and sleeping over sometimes. Korero-conversation, speech. Korero mai- speak to me.
I quoted, or referred to three of Baxter's poems: 'High Country Weather', 'Crossing Cook Strait', and 'The Mountains', which I read in: 'Selected Poems of James K. Baxter', edited by Paul Millar.
COMMENTS OF THE POEM
Michael Walker 24 November 2018

I have commented in 'Notes about the poem'.

Your travelogues are simply breathtaking which present the place and the person being introduced in precise detail so as to give the readers a sense of satisfaction of having read a masterpiece. This poem goes into MyPoemList.

Thanks again for being so discerning. I guess quite a few of my poems are travelogues and I'm glad you like that style.

Wow...that was an interesting write. How wonderful to meet our famous New Zealander, James K. Baxter in person.

It was one of the highlights of my life, which I have never forgotten. Thanks for your affirming comment.

It was one of the highlights of my life-never forgotten-and I thank you for your affirming comment.

I would like to translate this poem
Poems By Michael Walker
Finish Line.
Life And Death.
The Last Video Shop.
Manners.
The Tree Of Life.
See All Poems by Michael Walker
Next Poem
261 / 168
Previous Poem