Rating: ★5.0
See the smile, forged from the deep cold waters
of the Seine, and now fixed forever within a tranquil frame.
Enigmatic, sleeping contentment, no trace of life's impromptu end
Unknown to all but God, and yet now beloved and kissed by unknown lips
Named by men.. L'inconnue de la Seine
Her death mask a call to recognition, so common in the day
It's gentle, beauty imprinted in his mind, so immortal the image,
he created the mannequin in her likeness.. now so familiar
The maidens dead lips bringing to life, those once lost,
renewing precious breath and being.
Her anonymity in death now illustrious in the living
and forever revered in her new form
Sleep well ma petite, 'Unknown Woman of the Seine' 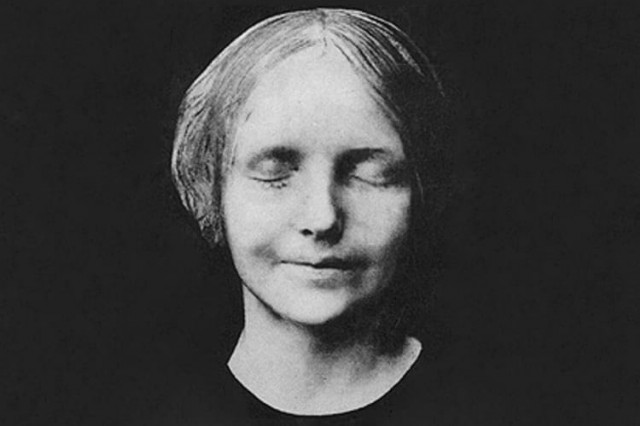 Lodigiana Poetess
Topic(s) of this poem: death,immortality,unknown,woman
POET'S NOTES ABOUT THE POEM
This is the death mask of a young woman who drowned in the Seine in the 1880'.To help identify unknown persons a death mask was made in the hope someone would recognise her. This particular image was so powerful that many copies were made. Many years later a young man, developing what would become known as a CPR doll, wanted to give his mannequin a natural appearance and herememberedthe image he had seen of the ‘Unknown Woman of the Seine and she now graces the apparatus that has brought lifemany many people and she probably has the most kissed face of all time.
READ THIS POEM IN OTHER LANGUAGES

I would like to translate this poem
COMMENTS
Shaun Cronick 20 November 2020
Back for another worthy and most deserved reread. Brilliant. Highly original and oh so touching. A poem to treasure and its so sad yet immortal message never to forget. Five worthy stars bestowed again, but its not about the stars or points. Simply the poetesses heart-felt unique message. Thanks again Lodigiana and I wish you well. Enjoy life. Shaun.x.
0 0 Reply
Lodigiana Poetess 01 January 2020
I’m so pleased that you found this one Shaun! I happened across the story one day and was so touched by the sad tale that I wanted others to know how this unknown, enigmatic lady is now, because her image was used on CPR mannequins, probably the most kissed lady on the planet. Thank you so much for your lovely comments my friend and a Happy 2020 to you and yours.xx
7 0 Reply
Shaun Cronick 01 January 2020
Please! No! Pretty please with sugar on the top Lodigiana, just don't stop writing! And thank you again. Take care.
0 0 Reply
Shaun Cronick 01 January 2020
Brilliant and brilliance! Absolutely enlightening poem. I never knew about this poor woman and her tragic story. The mixed powerful emotions on display are so captivating, eternal life after a cruel death. Brilliant. And your incredible closing line 'Sleep well ma petite, 'Unknown Woman of the Seine.' Is the stuff touching, compassionate dreams are made of. 10++ and added to my brilliance treasure chest. Thank You Lodigiana and happy new year.
8 0 Reply
See All Comments