North Wind - Wind In The Streets Poem by Bulent Karaalioglu

North Wind - Wind In The Streets

Wind in the streets, love on my mind
Old rains at midnight
They sing quietly, softly
The one I miss is far away now

Nilüfer's song gets under my skin.
I wanted to be the wind, but I became a human.
The bird won't know Nilüfer's song.
Nilüfer will not know how to fly like a bird.

There's wind in the birds' main path.
All I need is the wind
Either pure snow or wind purifies the cities
My brain will be cooled by the north wind
In the centre skin of the cities,
I'm a dead body like the earth.


Tell me, wind, are you like letters that are never written?
Tell me, bird, with the wind,
If you'll be my friend
I used to feed you fish.

The bird won't know Nilüfer's song.
Nilüfer doesn't know how to fly like a bird.
The bird and the wind are friends,
The one who lost his rainbow coat,
At the pier of a city, in the future hours of fishing boats,
I made friends with a cat on the shore.


A city in the north, wind north-west
Wind level 2
City of sea, sand and wind
There's wind in the streets. There's a sadness in me. The wind plays in my hair, in the leaves of the trees.


The wind without learnt forgetfulness,
A messenger from the sky, an echo.
There are no windows, doors and walls.
I hand myself my honoured sword (my pen) to the bench where I fit the sky into my heart and subjectivity.

I especially like the bench where the wind blows the sweetest and strongest. The waves intensify their attacks. I love the simple water bubbles in the last words of the sparkling salt on the rocks.

All connected to each other
Sun, wind and sea
This is the only place where I don't dream and think. I'm not dreaming. I'm in it.
No thinking, just watching.
There's nothing to do.
I'm trying to be a blind painter.

After all the mathematical and geometrical calculations, we whistle in the dark in the universe. The universe is a blind painter with a brush without feeling.

Money is the wind, mono money is sweet. Two money is profit. Three money is crisis and poverty.
People are the wind. One people sleep. Two people are organisations. Three people are storms and hurricanes.
She'll uproot reigns.

One woman is the wind. Two women are a storm. Three women are hurricanes.

The love in the depths of our soul is like the wind. It's warm like a breeze.
As the level of the wind increases, it turns into a storm or even a hurricane.
We came from this universe like the wind,
We're going like the wind.


Immortal papers will be left behind.
Even if they're addressed to a different organ,
Toilet paper is everyone's problem in supermarkets
Tons of toilet paper. Colourful rolls
It's not poetry people are worried about.

There is wind in the streets, lotus in the song.
There is wind outside and sun inside me.
I became human when I wanted to be the wind.
A city in the north
Wind south level two
If the wind and poetry stop, the world will stop.
...
3 February 2021
Sinop
Time: 04.33 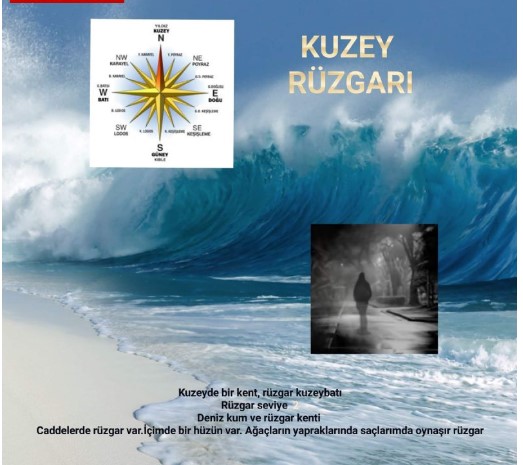