The dry leaves are shaken off by the wind
The wind softly whispered in the tired of the dizzy climate
The land regenerates willingly on the animals that inhabit it
The leaves are ready and willing to be eaten by insects, worms and slugs

Trees that soar high reaching the sky have been tested by various storms as if they are still strong even though they are old but still protect every habitat below them
His organs seemed willing to die and regenerate because that was the sacrifice of his life
When the harvest season arrives, it's not uncommon for him to be stoned or his branches deliberately broken to get something, but he still reciprocates by giving the fruits he produces.
His sacrifice will still not be in vain and while expressing gratitude to the Creator for what has been given

He is the only one who lives in that area
Others have died to life, or have even been cut down by humans in the name of civilization
He is still a tree and will never turn into an animal
But with gratitude and reverence for his environment he is willing to stay silent and only move upwards to welcome the sunlight 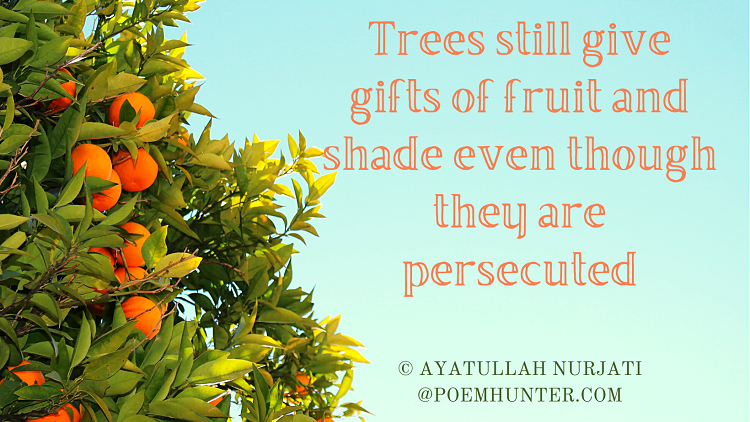 Ayatullah Nurjati
Tuesday, January 24, 2023
Topic(s) of this poem: Tree,Trees,fruit,leaves,wind,animals,insects,storm,strong,sacrifice,gratitude,life,environment,animal
poem poems wind leaves Branches Storms Animals Environment animal cut
Download image of this poem.
Report this poem
POET'S NOTES ABOUT THE POEM
Trees still give gifts of fruit and shade even though they are persecuted
COMMENTS OF THE POEM
See All Comments
READ THIS POEM IN OTHER LANGUAGES