The Buzzing Of The Bees (Chance - Operations) - Poem by Muzahidul Reza


The gentle sound of bees buzzing among the flowers
A favorite sound of summer,
But why do bees buzz?
And how do they make that buzzing sound?

Of course, we can't get into the minds of bees!
But by observing their behaviors
We can make a few guesses;

I look into this subject
Using some of my favorite books about bees
As it is a question
I have been asked whilst giving my talks;

I found that theories and ideas had changed over time
No surprise there
History shows we form ideas about a thing
Only to learn more
And change our minds later;

Firstly, buzzing is of course, commonly heard
When bees are simply flying
During which time, the wings are vibrating very fast,
But bees will also buzz at other times
And the tone of the buzzing may alter.

One example is
They seem to buzz more aggressively
If their nests are disturbed
Or if they are disrupted during foraging;

They will also buzz more aggressively
If attacked or
Defending themselves from predators
Or during conflict with other members of the colony
As the queen bee;
Of course, bees buzz from flower to flower
But whilst foraging, for a few seconds
They tend to remain quiet;

Not so during buzz pollination
The anthers of some flowers, i.e., the parts carrying the pollen
Only release their pollen if they are shaken,
Bumblebees achieve this
By placing the upper part of their body, thorax
Close to the anthers
Then vibrating their flight muscles very fast;

At the same time, they make a lovely buzzing sound
Buzz pollination is especially beneficial for tomatoes
And other fruits
Resulting in a more abundant crops;

One particular type of high-pitched buzzing sound
Made by honey bees is called 'piping',
Piping occurs directly prior to swarming
But can also occur during the disturbance of a hive;

There are differing views
About which bees in the honey bee colony
Initiate the piping prior to swarming;

Sometimes, the queen starts buzzing first state
Then the piping begins
With a small group of experienced forager bees
Called 'nest-site scouts'
Who produce a "piping-signal"
That primes the workers for swarming;

Again, when honey bees 'waggle dance'
To communicate the locations of food
Flowers upon which to forage
To other members of the colony,
It is not only the movements of the honey bee,
But also the buzzing sounds made,
That convey the whereabouts of the forage sources;

Also the noise may cause by air passing
Over the edge of a membrane
In tiny holes in the segments of the abdomen,
(These holes are called spiracles) :

Anyway, the wings are involved making buzzing
The buzzing sound made by bumblebees
Which is at least greatly amplified
By the vibration of the wing membranes. 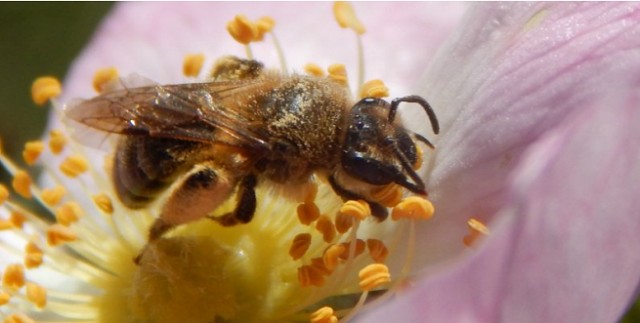 Topic(s) of this poem: poem