Somewhere, sometime, you were Wounded
Maybe as early as infancy when you were denied
All the essentials of the bonding experience
Perhaps the wounds were inflicted
When another toddler refused to return the toy you readily shared
Or by the mean girl who broke your favorite colored crayon
Or the bully who pushed you on the playground
Or perhaps it happened that first time
Someone more sophisticated, though lacking empathy,
Assailed your ears with a course laughter,
Aimed at you like a lethal weapon
Contrasting the cheerful chorus of joy laughter had always been
Maybe it happened the day you ran home crying
Mother revealed a secret: "Not everyone you meet will like you"
Unwelcome words that wounded and wound their way
Like strangling ivy around your core
Taking root in your heart of hearts
Passing years provide a scale of scar
Yet you are Wounded still

Somewhere, sometime, your Innocence was lost
Maybe it happened when your missing bicycle
Was spotted in the driveway on the next block
Or the day that special pebble found on the playground
Mysteriously vanished from your backpack
Maybe it was the first time you witnessed another's tears
And yet perceived no evidence of physical injury
Perhaps it was the initial instance when you caught someone in a lie
Betrayal became a biting sting instead of just a word
Maybe it was on the day the friendly neighbor invited you in for a visit
Closed the door, pulled down the shades
And the most sacred shelter of innocence was shattered
At the unworthy hands of one of life's lowest thieves
You learned another bitter truth
The knowledge of good and evil force-fed like bitter fruit
Time having done all it can to repair or bury
Yet Innocence is lost still

Whatever time, whatever place, or in whatever manner
Those who contributed to your loss of Innocence
Or at whose hands you were first Wounded
Do not hold the power to heal you
And they never will.
Even should they acknowledge and repent
You would still be walking through life wounded
Your initial Innocence still lost
Only you can sooth the hurts,
Bind the wounds, reclaim your rightful share of Innocence

Only Your Indomitable Spirit Can Prevail

Yours the choice to reject surrender and to overcome
You, accepting the role of Hero of your own life,
Who, in casting off from the past,
Becomes the Captain of all future voyages
Becoming one with the rest of us
We, the "Walking Wounded" 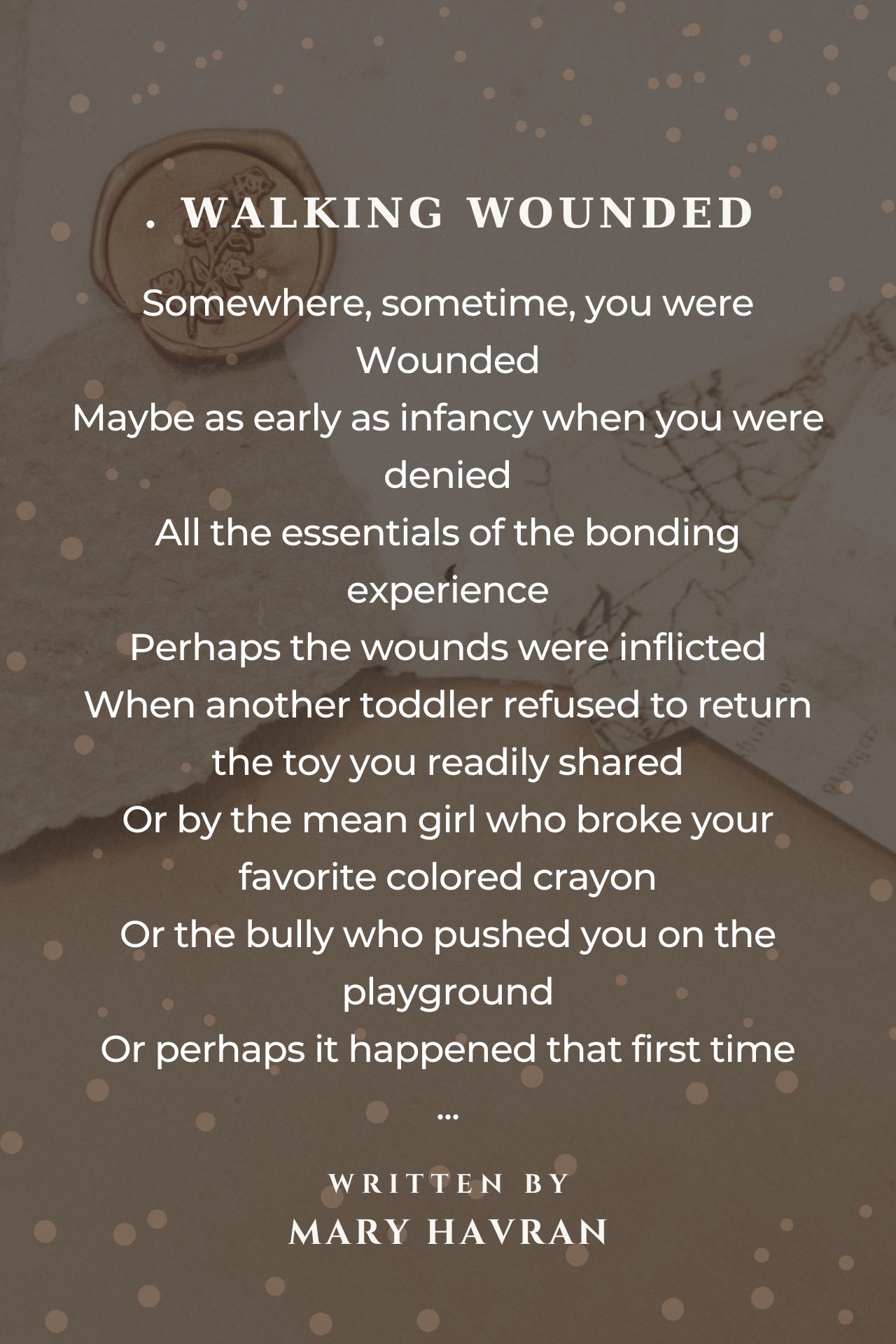 'Only your indomitable spirit can prevail'- what a fine message! Thanks for sharing!

Good morning poet friend Mary. This was a very touching read and a true story for so many, many people. You captured the theme and made it speak! I enjoyed, Loyd

Brilliant, you've captured those small pains that cut so deep and the life-shattering moments that refuse to be buried. I felt this poem profoundly. I do think, however, that sometimes we can 'surrender to win' - surrender is not necessarily a bad thing, if it means we surrender finally to the pain and let the tears out that our false pride wouldn't allow. I know you meant it in the 'capitulation' sense. Just food for thought.

Brilliant and just an amazing read Mary...so much so that I wish I wrote this piece of art! ((Smile)) and that says alot to me anyway.Please keep sharing as your writing skills and ideas in this one amazed me.I Love the concept and the advise shared at the end....HOW TRUE is is that we all are amongst the 'Walking wounded.'...and if someone isnt yet...they will be once they live long enough. Take Care of U Shelley

This is such a beautiful and yet sad tale. I enjoyed it very much. Everyone is hurt by life to some degree but the strong find that ability to heal. Kindest Regards, Irene

Dear Mary, I have wrongly written your name as Anjali. Sorry for the mistake

What your mother said is absolutely correct dear Anjali. It's a wonderful poem. Full marks.

'only your indominatable spirit can prevail' i love that line.. thank you for this =)

This poem is amazing! Great job! All the best, Chelsea

I would like to translate this poem
Poems By Mary Havran
Lonely Is Just One Word
Small Mourning Pieces
. Late Of Love
Before The Dawn
Sunrise At Skellig Michael
See All Poems by Mary Havran
Next Poem
1 / 99