What Have We Learned Poem For Palm Sunday

What Have We Learned?

They shouted with praises, reaching the sky,
Pushing and shoving to see Jesus pass by.
Crying, 'Hosanna, hosanna, glory to the King!
He comes to us today, great joy He doth bring.'

They threw down palm leaves, covering the way,
Clearing the way for His entrance that day.
Raising joyful voices, as praises filled the air,
The day had come, God answered their prayer!

But, in a short time they changed their chant,
From joyful noise, to a mob's hate-filled rant.
From Hosanna, hosanna, as when He was praised;
To crucify Him! Crucify Him, as their anger blazed!

In disbelief we might question why they turned?
But maybe the question is, 'What have we learned? ' 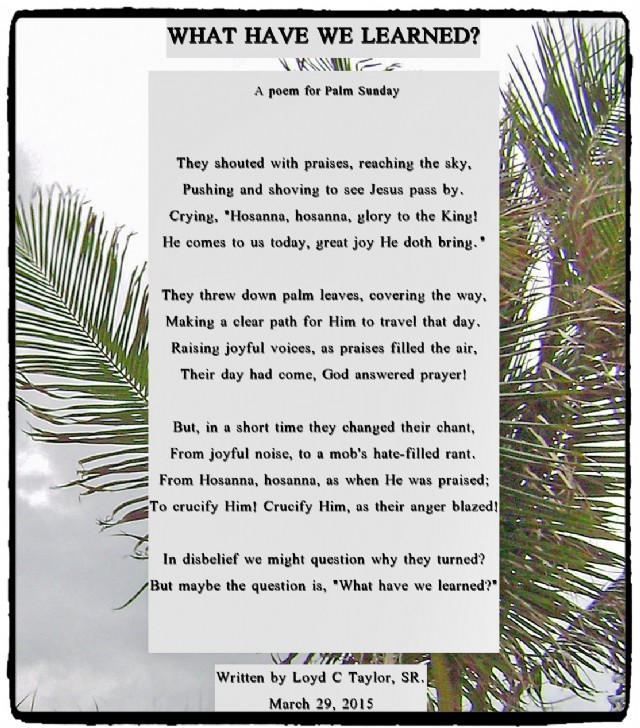 Loyd C Taylor Sr
Monday, March 30, 2015
Topic(s) of this poem: christ,christian,easter,fickle,palm sunday
poem poems anger Voices Disbelief
Download image of this poem.
Report this poem
POET'S NOTES ABOUT THE POEM
Author's notes:
It's amazing how people can be so fickle, they are this way this moment and then shortly they change. We see this in the crowd on Palm Sunday. One day they are raising their hands in praise and a little later the same hands are raised in an angry fist. The mouth that cried, 'Hosanna', later cries out 'Crucify! '
I jotted this down as I was thinking about Palm Sunday. I hope you enjoy it.
COMMENTS OF THE POEM
Kelly Kurt 13 April 2015

Wonderful poem, Loyd. Thanks for sharing

I think those that shouted Hosanna were the good common people, Christ was betrayed by a kiss taken in the night, the mob that shouted were political opponents in the pay of the Sanhedrin, temple officials, Romans, political factions supporting and benefiting from the status quo. Not much has changed and everything has changed.

A lovely prayer with nice rhyming. After 2000 years I still don't think most people have learned much.