Let the rain kiss you
Let the rain beat upon your head with silver liquid drops
Let the rain sing you a lullaby
The rain makes still pools on the sidewalk
...

HAD I the heavens' embroidered cloths,
Enwrought with golden and silver light,
The blue and the dim and the dark cloths
Of night and light and the half-light,
...

A bird came down the walk:
He did not know I saw;
He bit an angle-worm in halves
And ate the fellow, raw.
...

Slowly, silently, now the moon
Walks the night in her silver shoon;
This way, and that, she peers, and sees
Silver fruit upon silver trees;
...

Mother, the folk who live up in the clouds call out to me-
'We play from the time we wake till the day ends.
We play with the golden dawn, we play with the silver moon.'
I ask, 'But how am I to get up to you? '
...

Five pounds fifty in change, exactly,
a library card on its date of expiry.

Then a woman said, 'Speak to us of Joy and Sorrow.'

Awed by her splendor
stars near the lovely
moon cover their own
bright faces
...

Had I the heavens' embroidered cloths,
Enwrought with golden and silver light,
The blue and the dim and the dark cloths
Of night and light and the half-light,
...

In time of silver rain
The earth puts forth new life again,
Green grasses grow
And flowers lift their heads,
...

Celebrate our anniversary - can't you see
tonight the snowy night of our first winter
comes back again in every road and tree -
that winter night of diamantine splendour.
...

WHEN by my solitary hearth I sit,
And hateful thoughts enwrap my soul in gloom;
When no fair dreams before my "mind's eye" flit,
And the bare heath of life presents no bloom;
...

In the pathway of the sun,
In the footsteps of the breeze,
Where the world and sky are one,
He shall ride the silver seas,
...

Young palmer sun, that to these shining sands
Pourest thy pilgrim's tale, discoursing still
Thy silver passages of sacred lands,
With news of Sepulchre and Dolorous Hill,
...

Silver are the bellies of fish bargaining with their weight,
trying to discard it in the pawnshops of th sky,
Silver are the backs of waves, telling the rocks where
they've come from, and what they've experienced on the way,
but they never finish the story; because, short of breath,
sentences fall apart again and again on formations of salt,
Silver is the kindness of olive tress unlocking their shadows
and placing them in three tone levels of braying,
Silver is the scent of rosemary, that with the same care
pastes the juice from a wound on a baked fish, and on a gradual
leave-taking of the day,
Silver is noon, ordering everyone to keep still,
to measure the volume of their happiness with slow breathing,
to journey in their thoughts to the harbor
from which their childhood sailed away in a distant dawn,
Silver is the wind, adding to every hour of oblivion
three additional hours of oblivion, the hours that constantly
happen in the present,
Silver are sails, which in truth are white, and are silvery
because of the imagination's needs, and because of the
celebration of their inaudible movement,
Silver is the stillness of the afternoon, fastening its warmth
to the earth and then refusing to give
the seat to the approaching evening,
Silver are the traces of clouds, buildings cities in the air,
where we are invited when, after lunch,
we are buried under the avalanche of sleep,
Silver are the snow-drifts of algae, which have emerged
from the night waves to succumb on the silent indifference of
gravel in the morning,
Silver are the shouts of people who love their bodies,
Silver are the treetops of cypresses etching fugitive letters
on the flexible skin of summer,
Silver are vineyards, where the restless pheasants are preparing
for the shipwreck of the southern wind,
Silver is the flight of a seagull, stitching together the spoken
and the unspoken, making a lasting truce with the banging
of evening bells,
Silver is the movements of dry grass, having forgotten
the true life of the previous spring, and now
its ghosts wrestle day after day with the empty sleeves of wind,
Silver is the ring of moonlight which I place
on your ring-finger as you leave your body and urge
the night to return to you, prematurely dead,
Silver is the moon's rain, stopping
to caress the two of us when we are melting, silvered from
summer sweat,
And silver are the downy seeds
I watch lying on my back,
with eyes etched in the azures of the sky,
watching them falling from nowhere, disappearing to who
knows where.

the angelic child with golden eyes and golden hair!
I want to be so much like You
I can dry my wings in the sun
after the swim with the goldfish
...

On the 1st day of Christmas my employer gave to me
A paycheck without an increase.

On the 2nd day of Christmas my employer gave to me
...

(Latin: Remember that you shall die)
(An examination of the pointless vanity)
... 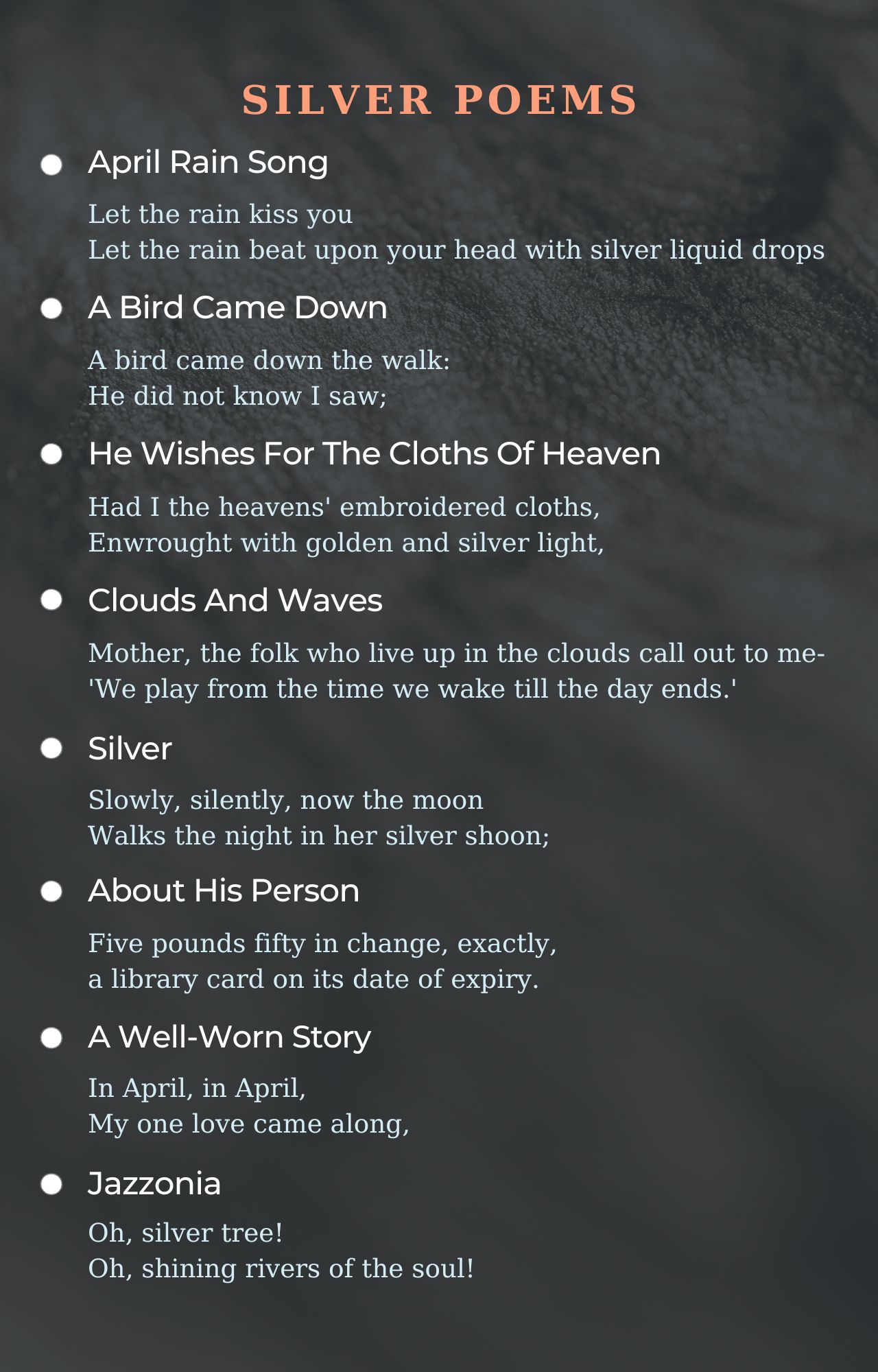