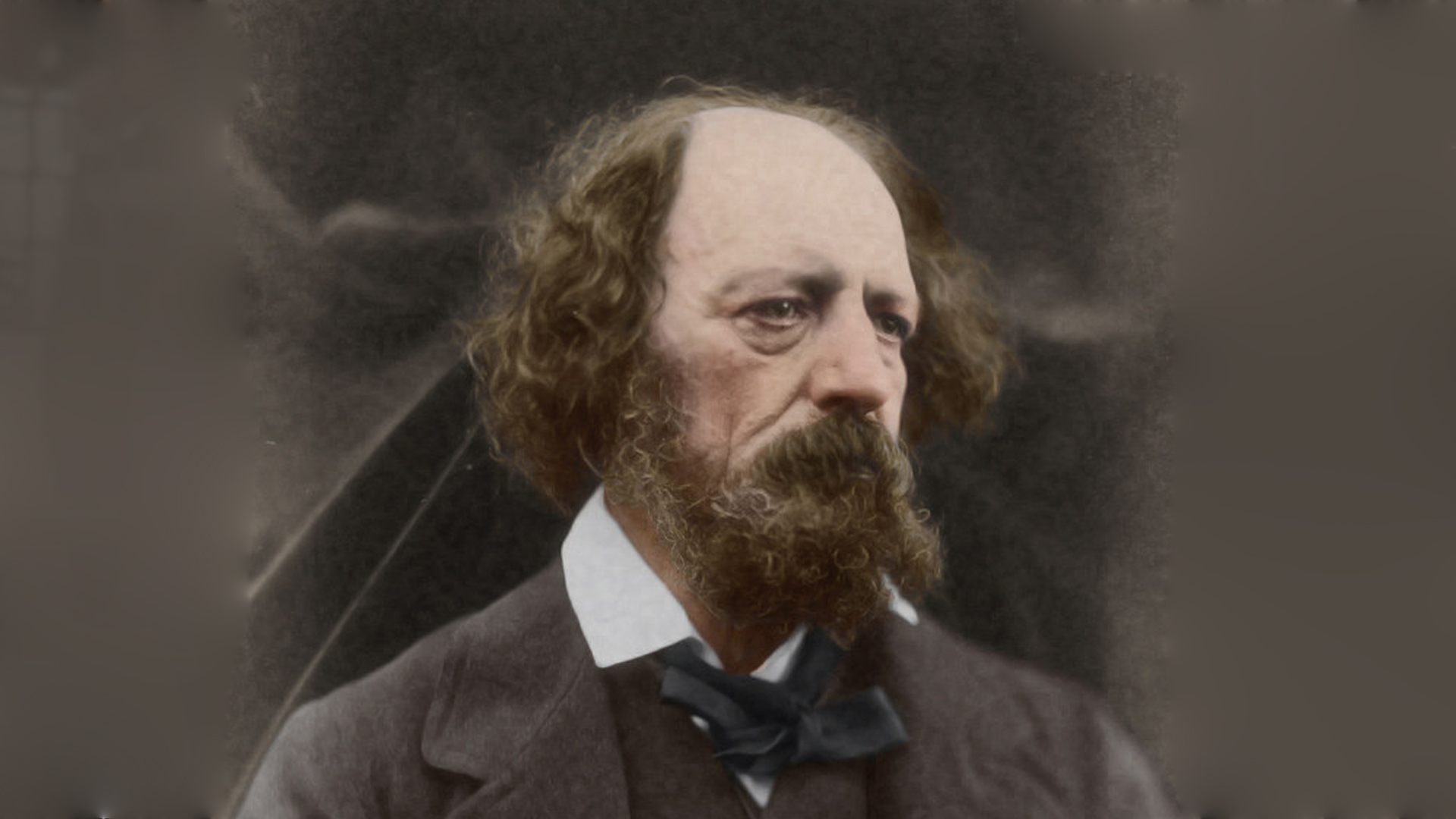 It little profits that an idle king,
By this still hearth, among these barren crags,
Match'd with an aged wife, I mete and dole
Unequal laws unto a savage race,
...

Sunset and evening star,
And one clear call for me!
And may there be no moaning of the bar,
When I put out to sea,
...

I come from haunts of coot and hern,
I make a sudden sally
And sparkle out among the fern,
To bicker down a valley.
...

Flow down, cold rivulet, to the sea,
Thy tribute wave deliver:
No more by thee my steps shall be,
For ever and for ever.
...

Read Poem
7.
All Things Will Die

All Things will Die

Clearly the blue river chimes in its flowing
...

He clasps the crag with crooked hands;
Close to the sun in lonely lands,
Ring'd with the azure world, he stands.
The wrinkled sea beneath him crawls;
...

Home they brought her warrior dead:
She nor swooned, nor uttered cry:
All her maidens, watching, said,
‘She must weep or she will die.’
...

Read Poem
10.
‘and Ask Ye Why These Sad Tears Stream?’

'And ask ye why these sad tears stream?'

Once in a golden hour
I cast to earth a seed.
Up there came a flower,
The people said, a weed.
...

PART I
On either side the river lie
Long fields of barley and of rye,
That clothe the wold and meet the sky;
...

Read Poem
13.
Come Not When I Am Dead

Come not, when I am dead,
To drop thy foolish tears upon my grave,
To trample round my fallen head,
And vex the unhappy dust thou wouldst not save.
...

Ask me no more: the moon may draw the sea;
The cloud may stoop from heaven and take the shape,
With fold to fold, of mountain or of cape;
But O too fond, when have I answer'd thee?
...

Tears, idle tears, I know not what they mean,
Tears from the depth of some divine despair
Rise in the heart, and gather to the eyes,
In looking on the happy Autumn-fields,
...

THE splendour falls on castle walls
And snowy summits old in story:
The long light shakes across the lakes,
And the wild cataract leaps in glory.
...

Below the thunders of the upper deep,
Far far beneath in the abysmal sea,
His ancient, dreamless, uninvaded sleep
...

It little profits that an idle king,
By this still hearth, among these barren crags,
Match'd with an aged wife, I mete and dole
Unequal laws unto a savage race,
That hoard, and sleep, and feed, and know not me.
I cannot rest from travel; I will drink
Life to the lees. All times I have enjoy'd
Greatly, have suffer'd greatly, both with those
That loved me, and alone; on shore, and when
Thro' scudding drifts the rainy Hyades
Vext the dim sea. I am become a name;
For always roaming with a hungry heart
Much have I seen and known,-- cities of men
And manners, climates, councils, governments,
Myself not least, but honor'd of them all,--
And drunk delight of battle with my peers,
Far on the ringing plains of windy Troy.
I am a part of all that I have met;
Yet all experience is an arch wherethro'
Gleams that untravell'd world whose margin fades
For ever and for ever when I move.
How dull it is to pause, to make an end,
To rust unburnish'd, not to shine in use!
As tho' to breathe were life! Life piled on life
Were all too little, and of one to me
Little remains; but every hour is saved
>From that eternal silence, something more,
A bringer of new things; and vile it were
For some three suns to store and hoard myself,
And this gray spirit yearning in desire
To follow knowledge like a sinking star,
Beyond the utmost bound of human thought.
This is my son, mine own Telemachus,
to whom I leave the sceptre and the isle,--
Well-loved of me, discerning to fulfill
This labor, by slow prudence to make mild
A rugged people, and thro' soft degrees
Subdue them to the useful and the good.
Most blameless is he, centred in the sphere
Of common duties, decent not to fail
In offices of tenderness, and pay
Meet adoration to my household gods,
When I am gone. He works his work, I mine.
There lies the port; the vessel puffs her sail;
There gloom the dark, broad seas. My mariners,
Souls that have toil'd, and wrought, and thought with me,--
That ever with a frolic welcome took
The thunder and the sunshine, and opposed
Free hearts, free foreheads,-- you and I are old;
Old age hath yet his honor and his toil.
Death closes all; but something ere the end,
Some work of noble note, may yet be done,
Not unbecoming men that strove with Gods.
The lights begin to twinkle from the rocks;
The long day wanes; the slow moon climbs; the deep
Moans round with many voices. Come, my friends.
'T is not too late to seek a newer world.
Push off, and sitting well in order smite
The sounding furrows; for my purpose holds
To sail beyond the sunset, and the baths
Of all the western stars, until I die.
It may be that the gulfs will wash us down;
It may be we shall touch the Happy Isles,
And see the great Achilles, whom we knew.
Tho' much is taken, much abides; and tho'
We are not now that strength which in old days
Moved earth and heaven, that which we are, we are,--
One equal temper of heroic hearts,
Made weak by time and fate, but strong in will
To strive, to seek, to find, and not to yield.

I recently looked into my Family Tree as sadly my Father passed away January last gone at 56yrs young! ! My mam sadly passed 5yrs before at the age of 52yrs young. I myself is 33 years of age. I have discovered that Alfred Lord Tennyson is one of my Ancestors. My father used to write poems as a hobbie but he was great at it. I now cant stop reading his work and think its fantastic. Could anyone suggest a poem to me that i can dedicate to both my parents please. I miss them so much and would like to get it printed and framed. I have yet to read loads more, any suggestions? ? Thank you for taking the time to read this comment.

There was a poem called To Julia on Her birthday unpublished by Alfred Lord Tennyson, I took it to Sotheby's to be sold in the70's along with other poems written by Tennysons own hand they said that it was not valuable enough, but they wouldn't return it to me, over the years I have requested it back but have had no reply from them, has anyone heard of it I believe he is referring to Julia Cameron who was the famous photographer during Tennyson's time

To Bernie Tennyson: I feel honored to talk with you as Alfred Lord Tennyson is one of my favorite poets. I recommend you IN MEMORIAM as it kind a fits with your situation. It is a requiem for the poet's beloved Cambridge friend Arthur Henry Hallam, who died suddenly of a cerebral haemorrhage in Vienna in 1833.

His poems are fantastic. My favourites are Break break break, Now sleeps the crimson petal (great version of this set to music in the film Vanity fair with Reese Witherspoon) , Come into the garden maud, The lady of Shallott, Crossing the bar

In Memoriam is pure beauty And I guess it's evident that I'm a fan of Ulysses, heh, mostly because I can relate well to Ulysses, flaws and all I respect the character in that poem so much, in fact it's hard to express and i get all teary when i try; _;

I read this poem again after 55years, my school days.

I read this to my kids. they are so bored by it they fall asleep so they won't hear it. i rather like it.

His poems are my inspirations when it comes to writing poems.

Foot note; Lady Elaine (Elayne) Astolat died of a broken heart because of her unrequited love for Sir Lancelot, according to Arthurian legend. Astolat is also known as Ascolat in the Winchester Manuscript and Escalon in the French Arthurian romances. La Dame Elayne de Escalon

Beyond Grace (The unwritten verse) by Ron C Leonard. Tribute to Alfred Lord Tennyson's The Lady of Shallot Our lady now is still driven The curse is broke she forgiven; Her sad eyes reflecting heaven Return’d to stars as was given; Beyond tower’d wall’d Camelot; One last web shield not yet started Reserve’d for her soul departed; Go where hearts need not be parted, The Lady of Shalott.

“Hope Smiles from the threshold of the year to come, Whispering it will be happier...”

“Tears, idle tears, I know not what they mean, Tears from the depths of some devine despair Rise in the heart, and gather to the eyes, In looking on the happy autumn fields, And thinking of the days that are no more.”

“Though much is taken, much abides; and though We are not now that strength which in old days Moved earth and heaven, that which we are, we are; One equal temper of heroic hearts, Made weak by time and fate, but strong in will To strive, to seek, to find, and not to yield.”

“Once in a golden hour I cast to earth a seed. Up there came a flower, The people said, a weed.”

“Dreams are true while they last, and do we not live in dreams?”

“The words far, far away had always a strange charm.”

“Come friends, its not too late to seek a newer world.”

“Theirs not to reason why, Theirs but to do and die”

“There lives more faith in honest doubt, believe me, than in half the creeds.”

“Sweet is true love that is given in vain, and sweet is death that takes away pain.”

“I am half-sick of shadows, said The Lady of Shalott.”

“The shell must break before the bird can fly.”

“More things are wrought by prayer than this world dreams of.”

“My purpose holds to sail beyond the sunset and the baths of all the Western stars until I die.”

“O love, O fire! once he drew With one long kiss my whole soul through My lips, as sunlight drinketh dew.”

So sad, so fresh the days that are no more.”

“So many worlds, so much to do, so little done, such things to be.”

“Life is brief but love is LONG .”

“For words, like Nature, half reveal And half conceal the Soul within.”

“The happiness of a man in this life does not consist in the absence but on the mastery of his passions.”

“So I find every pleasant spot In which we two were wont to meet, The field, the chamber, and the street, For all is dark where thou art not”

“A man had given all other bliss, And all his worldly worth for this To waste his whole heart in one kiss Upon her perfect lips.”

“For I dipped into the future, far as human eye could see, Saw the Vision of the world, and all the wonder that would be.”

“The city is built To music, therefore never built at all, And therefore built forever.”