Paris, from throats of iron, silver, brass,
Joy-thundering cannon, blent with chiming bells,
And martial strains, the full-voiced pæan swells.
The air is starred with flags, the chanted mass
Throngs all the churches, yet the broad streets swarm
With glad-eyed groups who chatter, laugh, and pass,
In holiday confusion, class with class.
And over all the spring, the sun-floods warm!
In the Imperial palace that March morn,
The beautiful young mother lay and smiled;
For by her side just breathed the Prince, her child,
Heir to an empire, to the purple born,
Crowned with the Titan's name that stirs the heart
Like a blown clarion- one more Bonaparte.

Born to the purple, lying stark and dead,
Transfixed with poisoned spears, beneath the sun
Of brazen Africa! Thy grave is one,
Fore-fated youth (on whom were visited
Follies and sins not thine) , whereat the world,
Heartless howe'er it be, will pause to sing
A dirge, to breathe a sigh, a wreath to fling
Of rosemary and rue with bay-leaves curled.
Enmeshed in toils ambitious, not thine own,
Immortal, loved boy-Prince, thou tak'st thy stand
With early doomed Don Carlos, hand in hand
With mild-browed Arthur, Geoffrey's murdered son.
Louis the Dauphin lifts his thorn-ringed head,
And welcomes thee, his brother, 'mongst the dead. 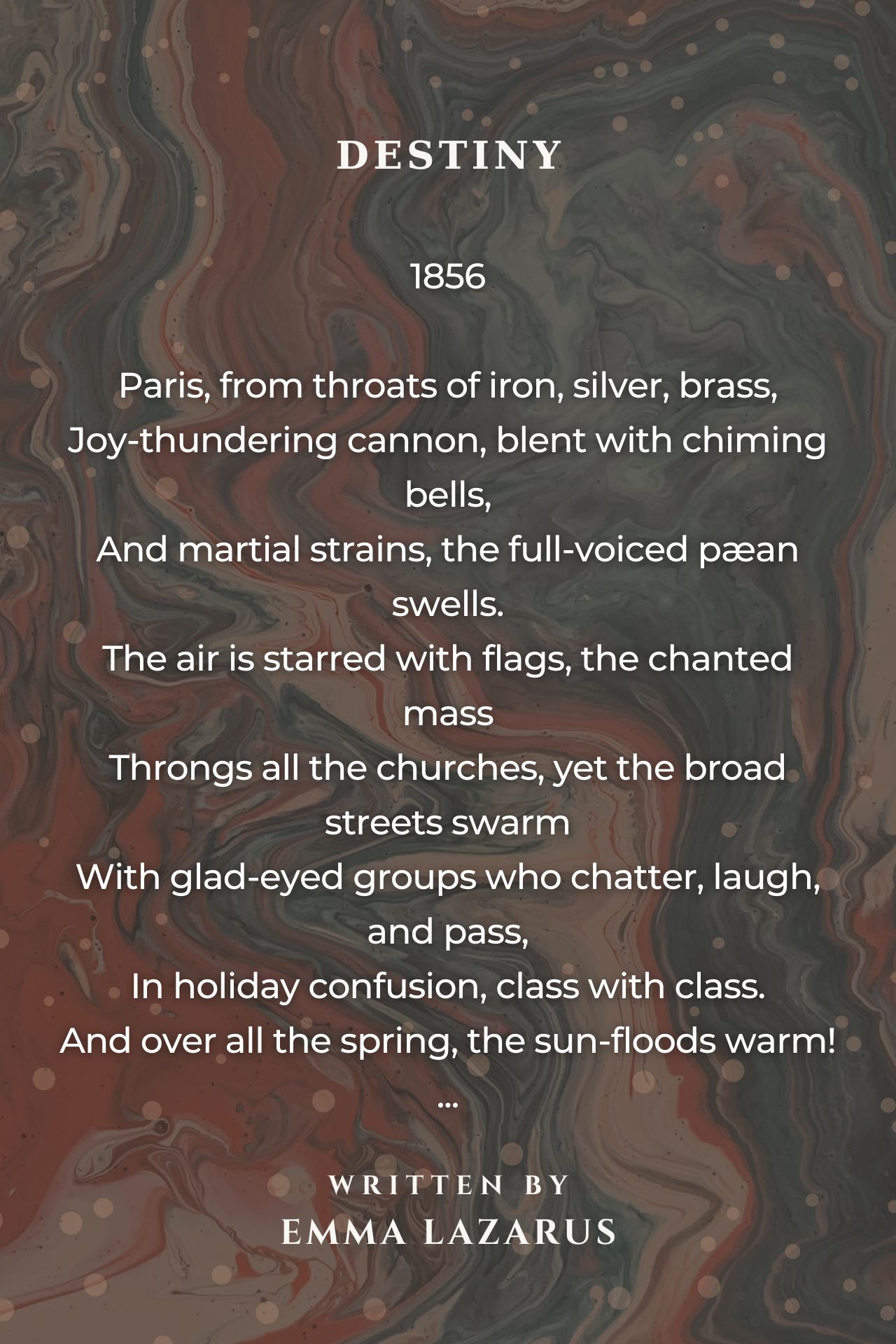 I think there had some bias when describing Africa. But it's not what you always hear; Bloody Wars, Epidemics, famines and droughts all this exaggeration and a dose of lies. There is a more attractive side which is not shown.

Two situations of Paris and Africa in two different periods of history in sonnets give a clear idea of Europe then!

Well articulated and nicely brought forth with clarity of thought and mind.

Amazing poetry by the amazing writer.

I was about to type the reader needs the historical background to even read this poem, much more to interpret it. Then I saw Stephen's helpful and objective paragraphs. Still I agree with Kinyua that this poem does not give us a genuine view of Africa in focusing on the young European (Does Emma Lazarus really admire this soldier of fortune? This outsider who bustles around as if he belongs on African soil?) . One of the great things about Poetry in the 20th century is that new voices were raised, eventually got published and were heard by everyone who was paying attention. In other words, we can now read what Africans have to say about Africa.

Napoléon, Prince Imperial (full name: Napoléon Eugène Louis Jean Joseph Bonaparte, prince impérial de France; 16 March 1856 – 1 June 1879) was the only child of Emperor Napoleon III of France and his Empress consort Eugénie de Montijo. After his father was dethroned in 1870, he relocated with his family to England. On his father's death in January 1873, he was proclaimed Napoleon IV, Emperor of the French by the Bonapartist faction. In England he trained as a soldier. Keen to see action, he successfully put pressure on the British to allow him to participate in the Anglo-Zulu war. In 1879, serving with British forces, he was killed in a skirmish with a group of Zulus. His early death sent shockwaves throughout Europe, as he was the last serious dynastic hope for the restoration of the Bonapartes to the throne of France.