The hollow hourglass runs its course
as sands of time trickle on
altering worlds in tour de force
hither and thither and yon,

to wit, by a number of means
while time with its crystal ball
oversees empyrean scenes
in now and then curtain call.

About eight thousand light-years far
a nebula young was spun
from out of dying low mass star,
quite similar to our sun,

that's engraving its own demise
with stellar wind that expands,
thus creating the hourglass guise
from intricate arc-like bands.

of insubstantial vision vast
fashioned in sculptural mold
reminiscent of hourglass cast
which may each instant behold,

by dint of seeming inner eye
peering outward from within
as a witness to passersby
through the cosmic thick and thin.

This cloud of gas in throes of death
in two directions has shed
its solar matter, life and breath,
for arresting hourglass spread

from three discrete pictures composed,
ionized nitrogen, red,
the oxygen blue hue disclosed;
then both together were wed

with hydrogen, green, for the third,
in Wide Field, Hubble display
of the hourglass image conferred
to ‘tempus fugit' portray.

The constellation Musca, Fly,
once known as Apis, ‘the bee',
is where within the southern sky
this nebula faint to see

was by two astronomers found,
ladies, though few and between
credited, with their names renowned
for M y C n eighteen.

Hubble revealed some features new
like how twin oval loops cross
midmost, which gazers could construe
as if a visual gloss

that mortals live on borrowed time
where death has the upper hand,
so soon will come the midnight chime
for the humble and the grand

however proudly we parade
our supremacy self-styled
in mindless human escapade,
while destroying nature's wild.

Yes, sands of time are running out,
yet we can awaken still
and make enlightened turnabout
if it be our wish and will…

To William Blake lines paraphrase,
there's ‘a world in grain of sand',
plus an earthly heaven to praise
in our sylvan wonderland,

for we hold eternity's ways
and all infinity spanned
in every moment's passing phase
within true wisdom's command. 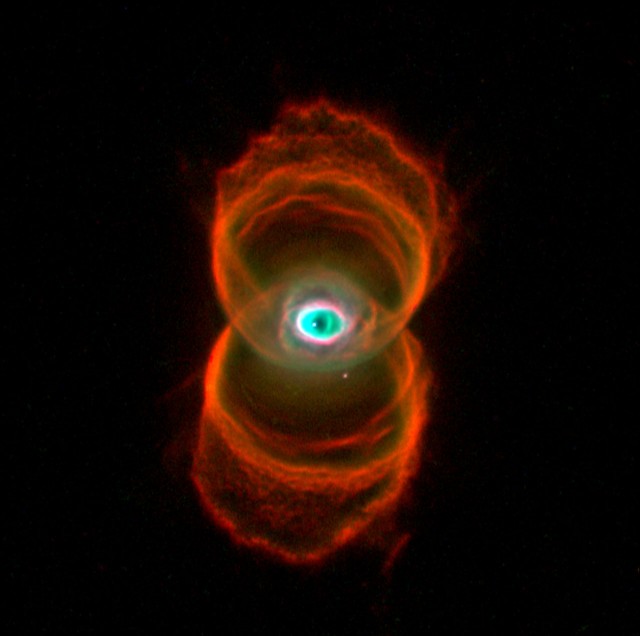 Some sources of poetic inspiration were the following…

Image explanation ~ This Hubble image of MyCn18, aka, Engraved Hourglass Nebula, a young planetary nebula located about 8,000 light-years away, was taken with the Wide Field and Planetary Camera 2 (WFPC2)aboard the Hubble Space Telescope (HST) . It reveals the true shape of MyCn18 to be an hourglass with an intricate pattern of ‘etchings' in its walls. This picture has been composed from three separate images taken in the light of ionized nitrogen (represented by red) , hydrogen (green) , and doubly-ionized oxygen (blue) .