Rating: ★4.9
Under inexorable gravity's pull,
galaxies often move toward one another.
Closer and closer they come to each other,
till astronomic smashups happen in full.

For no less than two of them, possibly three,
such a scenario has been predicted,
as computer simulations depicted
through the Hubble images researchers see.

Milky Way will have a new identity.
It's destined to get a major makeover.
Andromeda's bound for a broad takeover.
Milkomeda's what they'll call this entity.

In that head-on cosmic collision in view—
a colossal stellar encounter full-blown—
it is indeed likely our Sun will be thrown
from its present locale to a region new.

Milky Way will have a new identity.
Read More
The galaxies into each other will plow,
but our planetary realms won't be destroyed
nor be propelled into an outer space void,
though stars will not have the same orbits as now.

They'll go round a novel galactic center.
The fate for our own solar system in store
is perhaps to be tossed far off from the core
of the reshaped ellipse that it will enter.

Of course, by the time the collision takes place,
the surface of Earth, without intervention,
will be much too hot for water retention,
because of the Sun's super-luminous face.

This means no terrestrial life could subsist
or think that the heavens are seemingly strange.
Thus no one we know of would notice the change,
and our worldly woes will have ceased to exist…

For a while, the night sky will be all ablaze
with new star formations in radiant rays,
but at last in the merger's more final phase
it will look like spilled milk in a bright white haze.

Still there's no need to fret or to get upset.
This melding won't start till four billion years hence.
And that's way away in the far future tense…
So it's no use crying over spilt milk yet!

< January 2015 >
The galaxies into each other will plow,
Read More 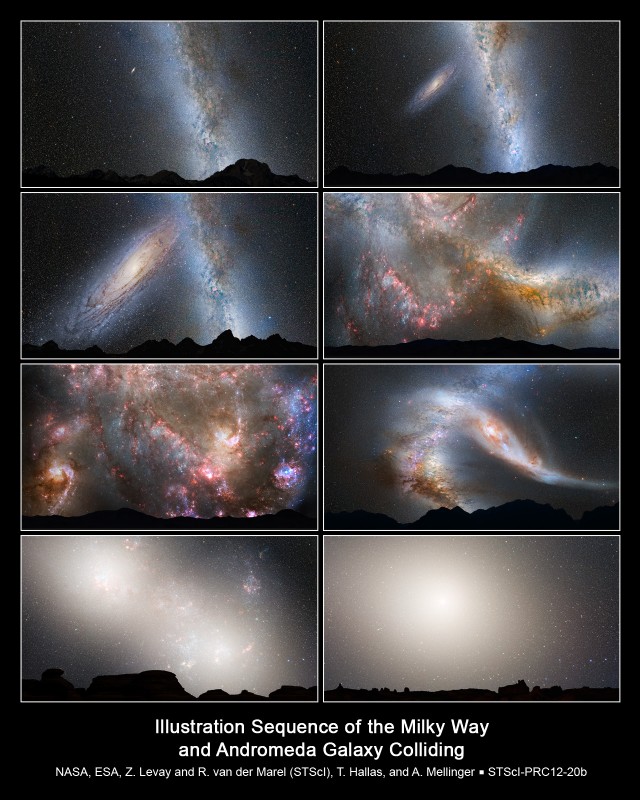 Harley White
Sunday, January 18, 2015
Download image of this poem.
Report this poem
Topic(s) of this poem: astronomy
POET'S NOTES ABOUT THE POEM
Inspiration for the poem was from article, 'NASA's Hubble Shows Milky Way is Destined for Head-On Collision'

Image ~ This series of photo illustrations shows the predicted merger between our Milky Way galaxy and the neighboring Andromeda galaxy. (Credit: NASA; ESA; Z. Levay and R. van der Marel, STScI; T. Hallas, and A. Mellinger)
READ THIS POEM IN OTHER LANGUAGES

I would like to translate this poem
COMMENTS
Kevin Patrick 22 April 2019
Science and poetry to of the finest disciplines of human development, sandwiched here into a captivating poem. While I have been familiar with the great collision coming, I never thought to craft a poem as special as this, so a neighbor will crash our party, at least we have 4 billion years to plan the rumble. One word Stellar
2 0 Reply
Harley White 23 April 2019
I very much like putting astronomy and poetry together of this sort. I’m so glad you found it captivating, which is my challenge. Thank you very much!
0 0 Reply
Bill Cantrell 02 January 2017
No use crying over spilt milk yet, I like that outlook as the milky way and andromeda form a marriage..milkomedas children will carry on, yet time will reveal the answer as we are now on the outskitts of the milky way instead of the center we will get a birds eye view. Another great poem, yes the collision that is already in progress is unfelt at the momen. I'm looking forward to reading all of your poetry my deep thinking friend.
7 0 Reply
Harley White 03 January 2017
Another astute comment from you... Thank you very much! As for my volume of poems, I have posted quite a variety of them over time, though recently I suppose there has been a predominance of astronomy ones, since I enjoy studying the skies. At any rate, I really appreciate your interest!
0 0 Reply
Pamela Sinicrope 25 August 2016
The hubble telescope has provided you with much to write about. I won't cry over this spilt milk, but I enjoyed your rhyme and the pictures. Thanks.
7 0 Reply
Harley White 03 January 2017
Thank you, Pamela. Indeed the Hubble telescope has provided many inspiring images to be treasured. I find it refreshing to turn my gaze upward...
0 0 Reply
Loke Kok Yee 05 April 2016
I don't care much for science but I sure like your rhythm n rhyme thanks
5 0 Reply
Clarence Prince 10 March 2016
Thanks for sharing, there is so much yet to learn, Harley!
5 0 Reply
Howard Savage 19 January 2016
Some times you can't help but cry over spilled milk. Good poem.
10 0 Reply
Kim Barney 19 January 2015
Interesting poem, very well written. Not quite what I expected when I clicked on the title. I see from Mr. Spock's comment that he has a poem called Big Bang Creation. I have one called Big Bang Memory. It's not what you would expect, either.
6 0 Reply
Spock The Vegan 18 January 2015
Very nice poem! See my Big Bang Creation
4 0 Reply
Gajanan Mishra 18 January 2015
The night sky all ablaze, good writing, thanks.
18 0 Reply
See All Comments