Click For The Best Poems ❱❱
Next Poem
52 / 84
Previous Poem

Mad As A Snake In Real Life

She is Snake, always plays in bushes
But her appearance like An Angel
She is snake in grasses
her face is so really looks very shady but her heart is ready to eat anyone who becomes his food in jungles

No one believes in her and neither does he
a snake is still a snake, it can't be a lizard
undisputed facts and neither is he
He, they, we believe in who he is, so does he

The white snake was a legend that Xu Xian fell in love
Queen snake medusa because of her evil nature was so unlucky and died because of the mirror shield by Perseus
Nyi Blorong whom Prince Tejo Arum felt in love
He doesn't want the woman to be Medusa, he wants the woman to be Bai Su Zhen or at least Nyi Blorong who, even though they are both snakes, can give love. 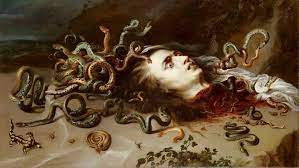 Ayatullah Nurjati
Saturday, September 25, 2021
poem poems snake woman facts evil mirror
Download image of this poem.
Report this poem
POET'S NOTES ABOUT THE POEM
Do not be snake in grasses
READ THIS POEM IN OTHER LANGUAGES