This is how it all began.
Why reindeers are pulling Santa's sleigh.
There are nine little reindeers
and Rudolph has always lit the way.

A long time ago, on a starlit night,
So Santa claus has said.
There was a baby reindeer born,
it was on Christmas Eve,
and his nose was a magnificent bright red
An angel was standing near by,
she was looking down on the birth.
She exclaimed with a flutter of her wings
'This is a wonderful event for the earth.
This baby, when he has grown,
Will help pull Santa's sleigh'.
That baby's name was Rudolph and he still,
Pulls the sleigh today.

Now, let me tell you a tale.
One that is quite true.
Rudolph tried to pull that sleigh
on his own, but this, he could not do.
His nose started to tingle.
He had dizziness in his head.
His nose turned black
and he fell on his back and
he spent a week in bed.

Santa told him.
'I'm not letting you pull my sleigh,
all on your own, no way.
We will get some help.
we will send a message out'.
So, that's what they did.
'Hooray'

A message was sent out through the universe.
It went chiming out with delight.
The message said eight reindeer are needed,
for a long hauling flight.
To go around the world
and it must be done, in one night.

Lots of reindeer were interested.
Santa saw, quite a few.
But, when they found, they had to leave the ground,
they were afraid and did not want too.

Santa was in a pickle.
He did not know what to do!
He asked his friend Jmax, if he knew,
but Jmax had not, got a clue.

Santa started to hear sleigh bells.
They were ringing in his ear
and when he looked up, suddenly,
from out of the snow,
eight reindeer did appear.

Now, a gentleman was walking with the reindeer
and when he saw Santa there,
He said.
'We have received your message, Santa,
it seemed to come out of the think air'.

The man introduced himself.
'I am Randolph from reindeer farm.
I have brought these ones,
for you to view and I am sure,
you will see their charm'.

Santa was over the moon.
He was in such a joyous state.
His belly became a wobble
and a ho, ho, came out of his mouth.

Randolph continued.
'Let me tell you, these reindeer are special.
They will never moan or complain.
They already know how to fly.
I'm telling you, they are top, of their game'.

Randolph then introduced the reindeer
and pointing a finger to each, he whispered
'That is Dasher with Dancer by her side,
then comes prancer and vixen,
right behind them are comet and cupid
and those on the end
are Donner and Blitzen'.

Randolph walked away,
he was waving his hand in farewell.
The reindeer and Santa, gently bowed their heads
And they all wished him well.

My tale is now over.
I have finely come to an end. Drawing by Susan Wagg
All I have left to say is,
A merry Christmas,
My good dear friends. 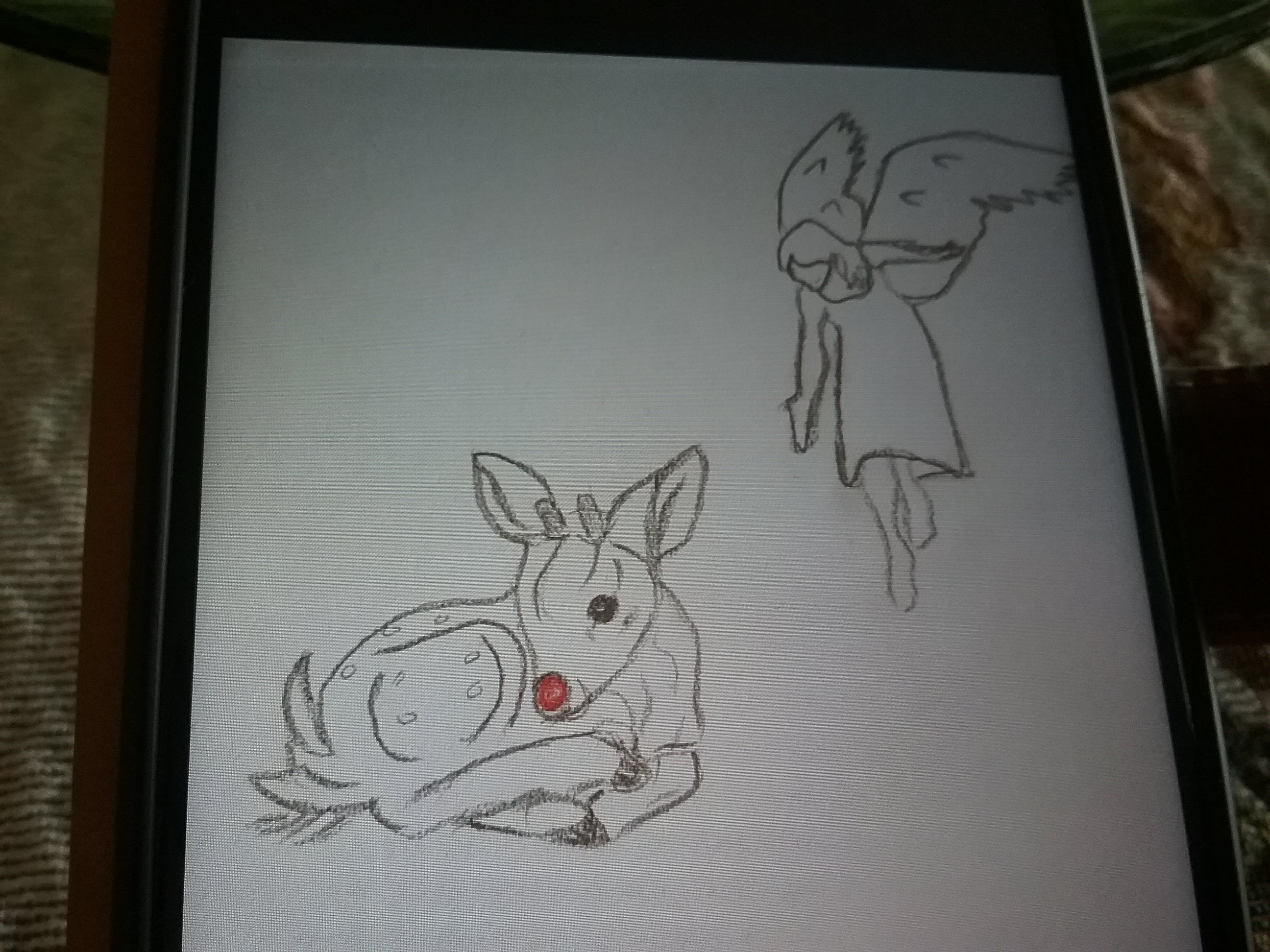 It's never too early to be in the Christmas spirit, well done.

Great and funny tale.Merry Christmas to you too Pam.Nice piece indeed.

I would like to translate this poem
Poems By Pamela lutwyche
If I Were A Tree
Dad's Best Coat
I'M Not In With The In Crowd! ! !
Grandma And Grandpa
The Pain Of Love
See All Poems by Pamela lutwyche
Next Poem
78 / 100
Previous Poem