The night is beautiful,
So the faces of my people.

The stars are beautiful,
...

Less time than it takes to say it, less tears than it takes to die; I've taken account of everything,
there you have it. I've made a census of the stones, they are as numerous as my fingers and some
...

Read Poem
Whats The Use Of A Title? Charles Bukowski

They don't make it
the beautiful die in flame-
suicide pills, rat poison, rope what-
ever...
...

The field of cornflower yellow is a scarf at the neck of the copper
sunburned woman, the mother of the year, the taker of seeds.
...

A beautiful singing bird
Imprisoned in a golden cage
Waiting to be freed
Since the hominoid age!
...

The deer were bounding like blown leaves
Under the smoke in front the roaring wave of the brush-fire;
I thought of the smaller lives that were caught.
Beauty is not always lovely; the fire was beautiful, the terror
...

You are my flower
you are my sweet soft petal
hand in hand
...in my hand
...

Beautiful star with the crimson lips
And flagrant daffodil hair,
Come back, come back, in the shaking ships
...

Read Poem
My Dove, My Beautiful One James Joyce

My dove, my beautiful one,
Arise, arise!
The night-dew lies
Upon my lips and eyes.
...

Who has not crossed the bridge of emotions?
Which keeps on flickering?
Day and night like the beautiful stars
Twinkling in the sky,
...

Read Poem
I Am In My Mother's Eyes Bharati Nayak

Oh Mother
I am
That daughter of yours
Who you see
...

The extraordinary patience of things!
This beautiful place defaced with a crop of surburban houses-
How beautiful when we first beheld it,
Unbroken field of poppy and lupin walled with clean cliffs;
...

Muhabat was an artist who loved his work.
Someone had given dreams to his dream.
...

As a poet that is what I do. I turn ugly to beautiful. I request you all to be a poet. A person who turns ugly to something beautiful is a poet.
...

Beauty, beauty is worth pursuing
Skin deep is still
Clear water is a beauty
fish, fish crawling like salamanders you see
... 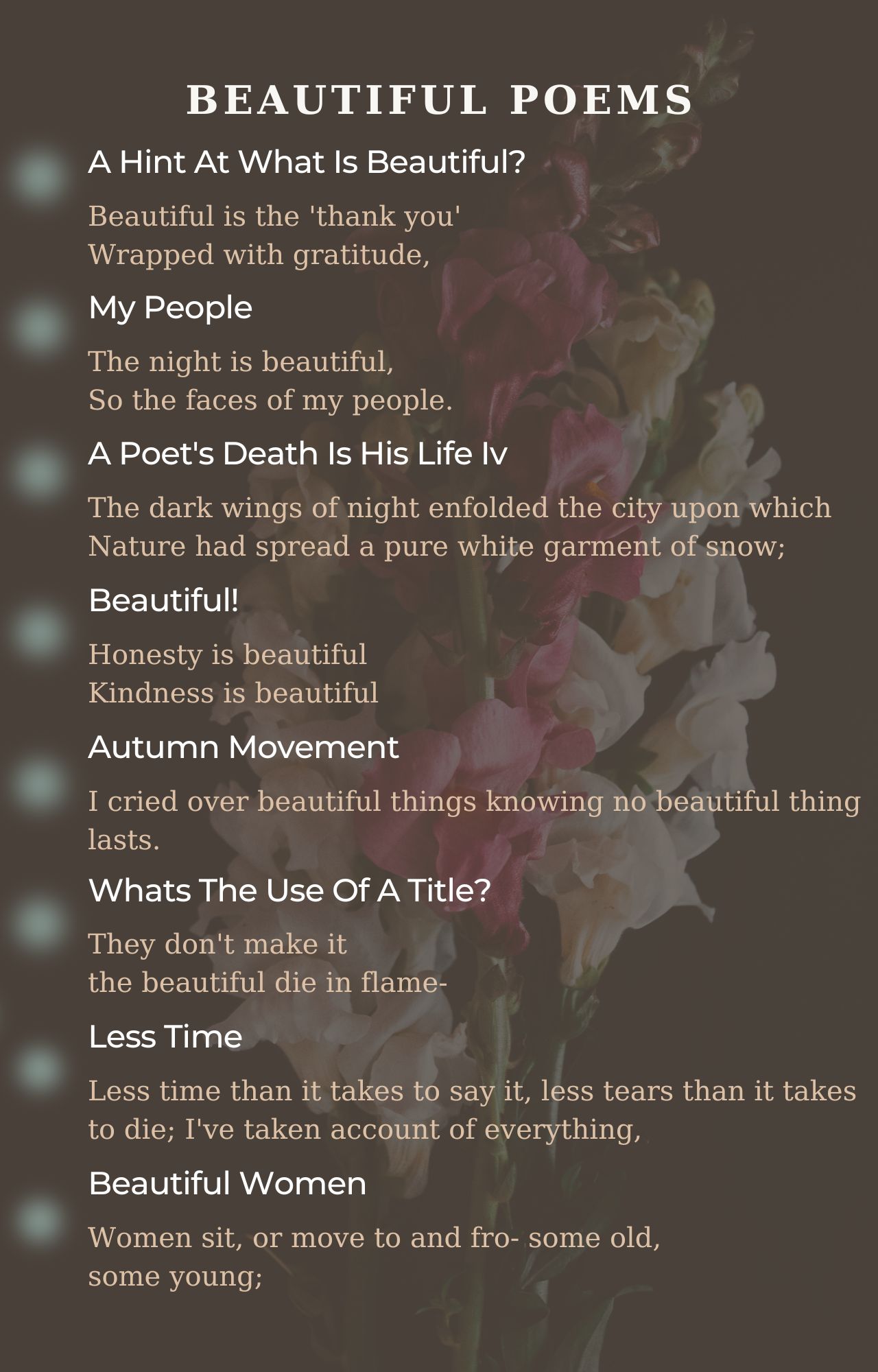 13 of the Most Beautiful Poems in the World

There are many good poems and poets in the world. Most of them have their own style and even their own words, however some of them use the same style with the others but their choices of words make them different. For a poem to be beautiful it doesn’t have to just rhyme, it should have a good plot or message but if the poem combines them, then it becomes beautiful.

You may write me down in history
With your bitter, twisted lies,
You may trod me in the very dirt
But still, like dust, I'll rise...
Maya Angelou’s Still I Rise is about how Maya can overcome any obstacle you put in front of her, how she is confident and doesn’t care about what others think and will continue rising even if others make fun of her because she is black or a woman. She is still rising. Because of these messages this poem is the 13th in this the most beautiful poems list.

so much depends
upon
a red wheel
barrow
glazed with rain
water
beside the white
chickens
This poem is about how ordinary objects such as e wheel barrow or chickens can be so beautiful but
we are not aware of it. This poem pulls our attention from the other side of the world where we
think beauty is, to around us.

Lay your sleeping head, my love,
Human on my faithless arm;
Time and fevers burn away
Individual beauty from
Thoughtful children, and the grave...
This poem is for every single lover in the entire world, it doesn’t matter who or what you are this poem includes everyone. Its melody is really nice as well as the lyrics. It touches your heart.
10. Sonnet 18, William Shakespeare
Shall I compare thee to a summer’s day?
Thou art more lovely and more temperate:
Rough winds do shake the darling buds of May,
And summer’s lease hath all too short a date;
This list wouldn’t be the most beautiful poems list if there weren’t any poems from Shakespeare. This Shakespeare wrote this poem to his loved one and to praise her beauty. In the poem Shakespeare compares a summer day to her beauty and prefers her beauty. The whole poem answers the question in the beginning of the poem “Shall I compare thee to a summer’s day?”.

Seventeen years ago you said
Something that sounded like Good-bye;
And everybody thinks that you are dead,
But I.
The title “A Quoi Bon Dire” is French and means “what good is there to say”. This poem has 3 verses. The first verse is about her loved one’s deaths and that everyone thinks he is dead but in the speaker’s heart, he is still alive. The second verse is about how the speaker is close to death though she knows that her loved one still sees her as young. The third and last verse is about another young boy and girl falling in love and thinking nobody will love like them, though actually a lot of lovers think like that so everyone love each other as much as they love each other.

8. She Walks in Beauty, Lord Byron

She walks in beauty, like the night
Of cloudless climes and starry skies;
And all that’s best of dark and bright
Meet in her aspect and her eyes;
The woman in the poem is as beautiful as a cloudless, starry night, which tells us the beauty Byron finds in said nights. And later on in the poem we learn that she has raven hair and bright eyes, combining it with the 3rd line, making the woman’s  beauty partly because of the contrasts between dark and bright, again idolising the woman’s beauty.

7. He Wishes for the Clothes of Heaven, W. B. Yeats

Had I the heavens’ embroidered cloths,
Enwrought with golden and silver light,
The blue and the dim and the dark cloths
Of night and light and the half light,
This was a love poem to the woman Yeats loved for years. They never married although Yeats asking her several times, and this poem didn’t have the effect he wanted in that regard. He says to the woman that if he was rich, he would give her everything he owned, but as a poor man, he only dreams to do so.

Once upon a midnight dreary, while I pondered, weak and weary,
Over many a quaint and curious volume of forgotten lore—
While I nodded, nearly napping, suddenly there came a tapping,
As of someone gently rapping, rapping at my chamber door.
Poe’s message in this poem is to “let go”. The man in the poem is haunted by the death of his beloved and the raven symbolizes “mournful, never-ending remembrance”.

Golden slumbers kiss your eyes,
Smiles awake you when you rise;
Sleep, pretty wantons, do not cry,
And I will sing a lullaby,
Rock them, rock them, lullaby.
The poem is obviously a lullaby and has a few metaphors in the usage of some words, one being that “golden” slumbers is meant for the beauty and rareness of good sleep.

Full many a glorious morning have I seen
Flatter the mountain tops with sovereign eye,
Kissing with golden face the meadows green,
Gilding pale streams with heavenly alchemy;
Sonnet 33 is one of Shakespeare's more famous sonnets. It contains a heartbreak unlike most of Shakespeare’s other sonnets. Shakespeare is dumped by Fair Youth.

3. My Heart Leaps Up, William Wordsworth

My heart leaps up when I behold
A rainbow in the sky:
So was it when my life began;
So is it now I am a man;
This poem is famous for this line: the child is the father of the man.
In the poem William Wordsworth says that our childhood shapes our adulthood so the child is father of the man. He saw a rainbow when he was a kid and that joy is still with him, if he loses it, there is no point of living for him.

O Captain! my Captain! our fearful trip is done,
The ship has weather’d every rack, the prize we sought is won,
The port is near, the bells I hear, the people all exulting,
While follow eyes the steady keel, the vessel grim and daring;
This poem is written for Abraham Lincoln who died after the American Civil War. It seems like a captain of a ship died after a war in the sea, actually the captain is Abraham Lincoln and the war that that has been won is the Civil War.

Iness
This poem is just 4 words and it is the most beautiful poem because it can tell so many things with just 4 words and how they are arranged. This unique arrangement of words and the words themselves make this poem the most beautiful poem and if you couldn’t read it here is what it says:
L (a leaf falls) oneliness. The phrase “a leaf falls” is between the “l” and “one” of “loneliness”
This poem explains loneliness with giving the poem the shape of “1” and dividing the word “loneliness” to leave “one” alone