I do not love you except because I love you;
I go from loving to not loving you,
From waiting to not waiting for you
My heart moves from cold to fire.
...

Some say the world will end in fire,
Some say in ice.
From what I've tasted of desire
I hold with those who favor fire.
...

Read Poem
My Love Is Like To Ice Edmund Spenser

My love is like to ice, and I to fire:
How comes it then that this her cold so great
Is not dissolved through my so hot desire,
But harder grows the more I her entreat?
...

Even the impossible can be done
because I believe it can
the toughest challenge can be won
because I am a fighting man
...

After that hot gospeller has levelled all but the churched sky,
I wrote the tale by tallow of a city's death by fire;
Under a candle's eye, that smoked in tears, I
Wanted to tell, in more than wax, of faiths that were snapped like wire.
...

My love is like to ice, and I to fire:
How comes it then that this her cold so great
Is not dissolved through my so hot desire,
But harder grows the more I her entreat?
...

It was an icy day.
We buried the cat,
then took her box
and set fire to it
...

Oh I have sown my love so wide
That he will find it everywhere;
It will awake him in the night,
It will enfold him in the air.
...

Young palmer sun, that to these shining sands
Pourest thy pilgrim's tale, discoursing still
Thy silver passages of sacred lands,
With news of Sepulchre and Dolorous Hill,
...

Calmly we walk through this April's day,
Metropolitan poetry here and there,
In the park sit pauper and rentier,
The screaming children, the motor-car
...

(A great one while calling his barroness by these names...)

You will hear thunder and remember me,
And think: she wanted storms. The rim
Of the sky will be the colour of hard crimson,
And your heart, as it was then, will be on fire.
...

The deer were bounding like blown leaves
Under the smoke in front the roaring wave of the brush-fire;
I thought of the smaller lives that were caught.
Beauty is not always lovely; the fire was beautiful, the terror
...

Yet, love, mere love, is beautiful indeed
And worthy of acceptation. Fire is bright,
...

O you whom I often and silently come where you are, that I may be
with you;
As I walk by your side, or sit near, or remain in the same room with
...

The lamps now glitter down the street;
Faintly sound the falling feet;
And the blue even slowly falls
About the garden trees and walls.
...

The gold moth did not love him
So, gorgeous, she flew away.
But the gray moth circled the flame
Until the break of day.
...

'Oh, dear, this utterly sweltering season of the highly rampant sun is drawing nigh, and it will always be good enough to go on taking daytime baths, as the lakes and rivers will still be with plenteous waters, and at the end of the day, nightfall will be pleasant with fascinating moon, and in such nights Love-god can somehow be almost mollified...[who tortured us in the previous vernal season... but now without His sweltering us, we can happily enjoy the nights devouring cool soft drinks and dancing and merrymaking in outfields...]
...

So Abram rose, and clave the wood, and went,
And took the fire with him, and a knife.
And as they sojourned both of them together,
Isaac the first-born spake and said, My Father,
...

Fire and Ice will never mix for fire will burn while ice freezes, fire melts ice making water to put out the fire, Fire and Ice they will never be friends
...

Read Poem
A Brief History of Hostility Jamaal May

In the beginning
there was the war.

The war said let there be war
and there was war.
...

This is the voice of a fire accident survivor!

I am a weird boy in wacky clothes,
I know fire bending since my birth.
When I was a mere child,
I started playing with fire,
...

Beside a flame
burning desire

Fire is the fundamental of all elements
Fire is a classical element
Fire is an element quick to flare up
Fire from heaven denotes lightening
...

Fire flies in their flight

casting shadows in the night
... 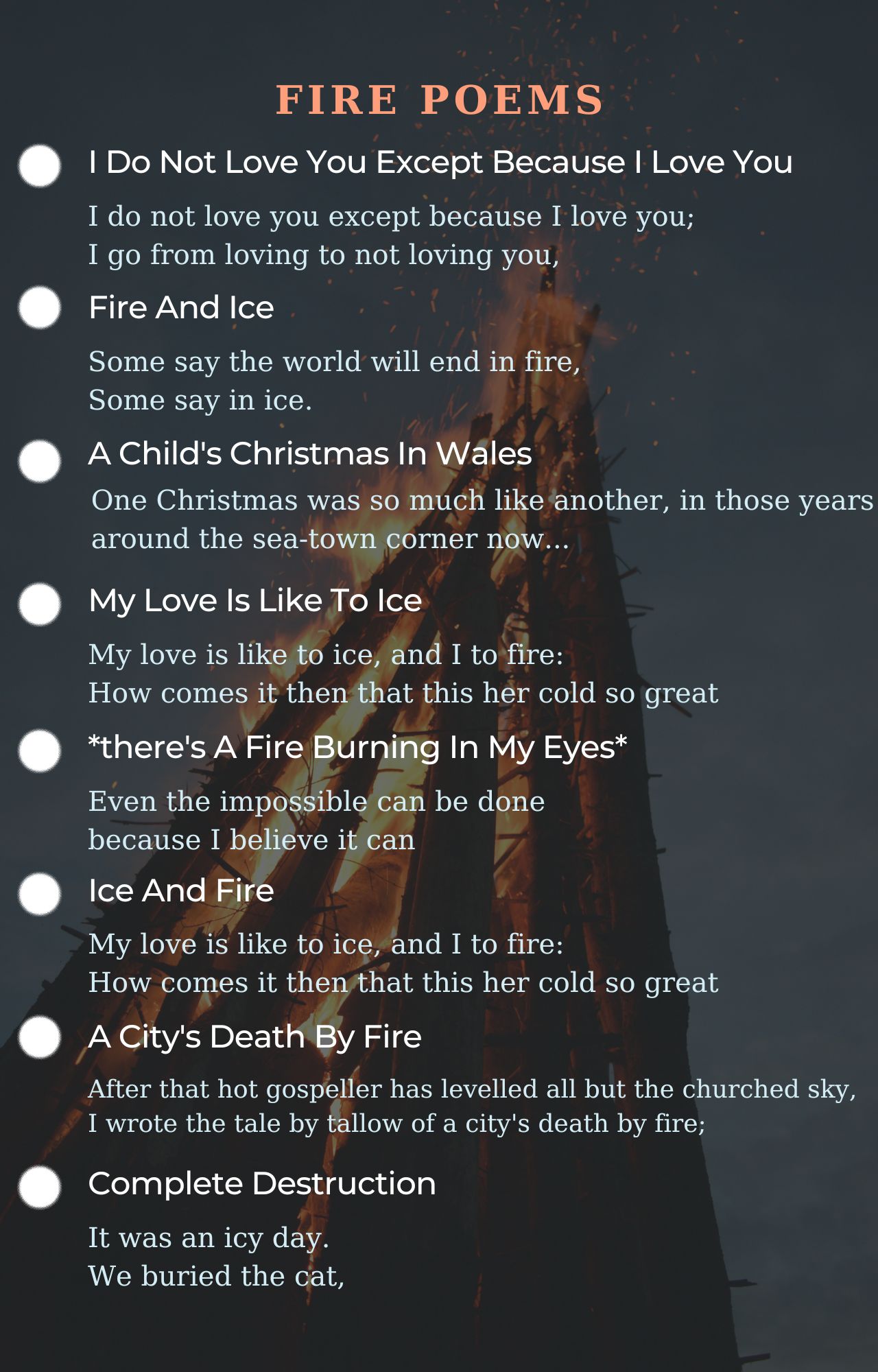