O nebula of dying star
so brightly glowing from afar,
you set my fantasies ajar.
How ghostly beautiful you are!

As Southern Owl you're also known
in female serpent Hydra's zone—
that feared, in Greek mythology,
ophidian beast of the sea.

Of constellations, Hydra's great,
the largest of the eighty-eight.
And you are seen five hundred plus
three thousand light-years from us; thus

we gaze in wonder at your face,
so lovely there in outer space
with countenance of blushing hues
in rosy rose and shades of blues,

four light-years in diameter,
which for a humble amateur
stargazer seems to cast a spell…
What sidereal tales you tell

of cyclic evolution, while
you pass away in gorgeous style
to merge within creation's flow,
as stellar winds your gases blow,

to ultimately fade from sight
and glorious celestial light!
Your core will burn a billion years,
until at last white dwarf appears.

Then comes the final cooling down
with loss of stardom's grand renown,
before into the universe
your astral elements disperse

samsara-like, in endless chains
of causal links in multi-branes,
according to M-theory's scheme—
but that is yet another theme…

O brilliant orb of bubble shape
whose splendors leave us all agape,
albeit in your twilight phase,
you twinkled once in shining blaze.

The stunning colors you display
in such spectacular array
will be short-lived in cosmic time,
as will this lyric ode in rhyme.

You show us how our sun might die
that lights the days in earthly sky—
an epitaph of pale blue sphere,
reminding of what fools lived here. 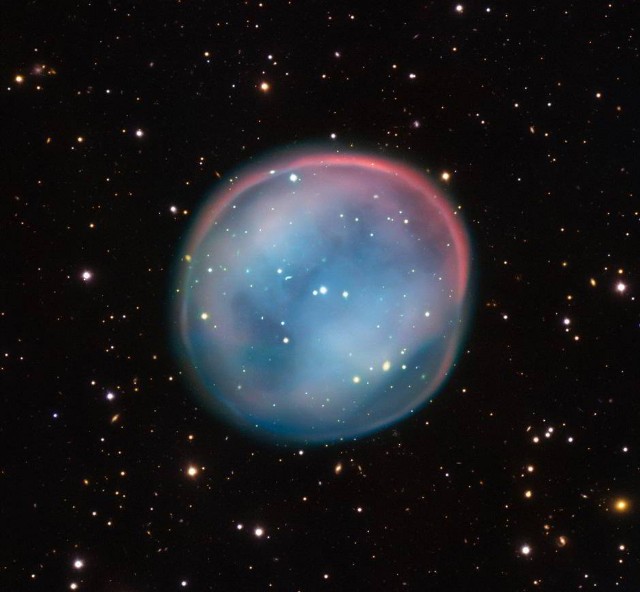 Harley White
Tuesday, December 1, 2015
Topic(s) of this poem: beauty,fragility,life and death,nebula,astronomy
poem poems lyric ode Elements Mythology chains
Download image of this poem.
Report this poem
POET'S NOTES ABOUT THE POEM
This extraordinary bubble, glowing like the ghost of a star in the haunting darkness of space, may appear supernatural and mysterious, but it is a familiar astronomical object: a planetary nebula, the remnants of a dying star. This is the best view of the little-known object ESO 378-1 yet obtained and was captured by ESO's Very Large Telescope in northern Chile. ESO 378-1 lies 3500 light-years away in the constellation Hydra. Image credit: ESO.

as I said before, a lovely read and I am beginning to have an idea of the stars thanks Harley