Pointillist patterns embellish the night,
which follows farewell of the sun-long day,
as journeys the moon's mercurial light
across the vast panoramic display.

There's a distant region of outer space,
in terms of our optic observation,
where a galaxy group with ancient face
helps fill in the picture of creation.

One that's amongst them is believed to be
an extremely primeval formation
of the universe, as perceived to be
in most scientific contemplation.

Hubble has brought us another great pic
from its decades of photos historic
by means of a radiance bending trick
which appears even phantasmagoric.

On the cosmic canvas this cluster grand
of galaxies stipples the ebon black,
gravitational-lensed through sleight of hand
celestial, by Einstein foreseen way back.

The enormous structure is so remote
that about seven billion light-years passed
before its effulgence managed to float
to where we could somehow see it at last.

Like a painting of astronomic art
with brushstrokes on intergalactic skies,
it shows the magnitude of worlds apart
for humankind's limited mortal eyes.

‘Tis within ‘Pictor' as commonly known,
though by lengthier sobriquet christened
in the eighteenth-century for the zone
where bright star Alpha Pictoris glistened.

‘Pictor' means painter, an artist with paint
in Latin, by French astronomer named
for a southern sky constellation faint,
cut from ‘painter's easel' as first proclaimed.

The assemblage, while small, resemblance bears
to apparatus plus palette with hues
for daubers engaged in fine arts affairs
inspired by creative calling or muse.

I'm reminded of works with that device
as a prominent feature in their scheme.
‘Las Meninas', comes to mind in a trice,
by Velázquez, a masterpiece supreme

though often considered mystifying.
The artist gazes, at left of the scene,
outward from behind his easel, eyeing
the tableau perhaps in a mirrored mien.

Of course there was also Vincent van Gogh,
belatedly viewed as one of a kind.
In a famed self-portrait the colors glow
with his name on the easel boldly signed.

Chagall carried on this portraiture theme,
depicting himself with seven fingers.
He saw his works as ‘humanity's dream',
with an art ‘surnaturel' that lingers

on in the realms of imagination.
Norman Rockwell too got into the act
with paint illustration combination,
to wit, a ‘Triple Self Portrait' in fact,

which exposes his manner ironic
through the characteristics risible,
in this final example iconic
of portrayals with easel visible.

To return to our galaxy cluster,
called SPT O Six One Five, for short,
it's extremely high red-shifted luster
would make it an oldster among this sort.

would take his position on center stage
for me as ceaseless wellspring of wonder
with ageless lines found on page after page
that resound like the echoing thunder.

Sentient beings are curious creatures
who pursue all cosmological roots,
seeking to study unfathomed features
whatever the cost of their labors' fruits.

And yet there is so much more to explore,
immense inner depths within us to plumb,
not to mention ‘the great beyond' in store,
expressed in Prince Hamlet's ‘what dreams may come? '…

Is it easier to look to the skies,
survey the spectacular starry vaults,
than search for where true enlightenment lies
or the origin of our human faults?

The various arts can vision uplift
and stelliferous vistas overhead.
Still, closer to home is the priceless gift
of life to be lived while the earth we tread! 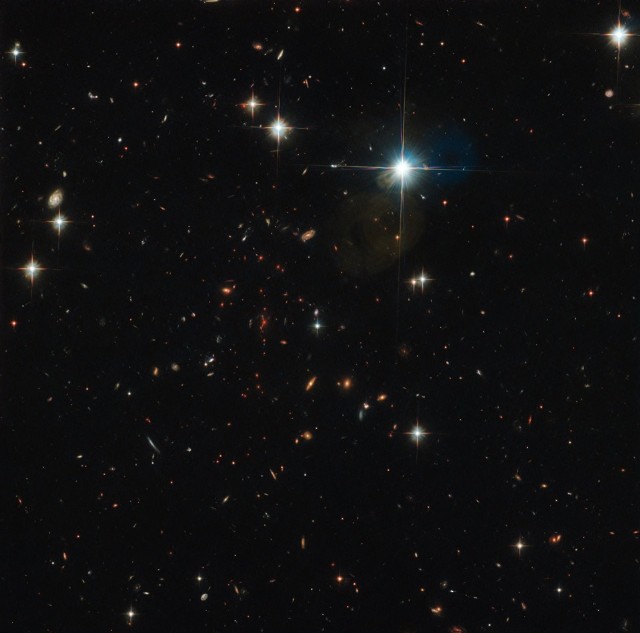 Hubble Peers at an Ancient Galaxy Cluster (article and image) …

Distant and ancient(article and image) …

‘Las Meninas', Spanish for ‘The Ladies-in-waiting', is a 1656 painting in the Museo del Prado in Madrid, by Diego Velázquez…

‘Self-Portrait with Seven Fingers' is an oil painting by Belarusian

‘Triple Self Portrait', a Norman Rockwell painting, appeared on the cover of ‘The Saturday Evening Post' published February 13,1960…

Image explanation ~ Dotted across the sky in the constellation of Pictor (the Painter's Easel)is the galaxy cluster highlighted here by the NASA/ESA Hubble Space Telescope: SPT-CL J0615-5746, or SPT0615 for short.

Magical and generous, this poem makes you want to come back to it regularly.

It is gratifying to know that the poem makes you feel that way. Thank you for reading it and for sharing your reaction.

You are a blessing not only to poetry but to those that embrace deep thought, oh how I would love to talk about the concepts of galactic beginnings over coffee with you, but in terms of optic observation of the cosmic canvas by Einstein’s celestial vision slight of hand analogy.....my goodness, that in itself is something to be lectured over a few semesters at least! ! ! Just a marvel of a poem my friend, I will read this again..we do love mysteries of the deep cosmos...thank you! ! ! !

I am really glad you like the poem! It is always such a pleasure to read your comments! Whenever I undertake a poem, particularly one about the cosmos, I end up learning a lot, too. So it is often an adventure for me as well. I am truly encouraged and reassured to know through your feedback that my work communicates what I hope it will! Thank you very much for your ongoing support!