Repertory Of The Danda Nata


The most popular and and the most old dance
Ancient Kalinga Kingdom has gifted to the world,
This is the Danda Nata, the dance festival of people,
In this season of Danda Nata monsoon of music flows
With victorious sound of the drum known as Dhola
And the sweet tune of traditional Mahuri,
Devotees who participate in this festival are
Known as Bhoktas or Danduas and all are males
Passing through a process of purification,
They act, sing and dance as per the playing of Dhola,
Metaphoric and humorous songs they sing to motivate,
Audience gets glimpse of golden motivation
When bhoktas at midday and midnightperform dance
After having only one meal at night
And maintaining chastity for this period of austerity,
In the month of Chaitra at least for 21,18 or 13 days
Chaitra falls in between March and April every year,
Worshiping Supreme Lord as per their devotion and trust,
They celebrate a purification festival
Practicing vegan lifestyle in this period,
They achieve a motivational goal of life
For self and others they bring out this ceremony!
During the day of Chaitra Sankranti
They celebrate their final festival is Meru Parba,
Following the traditional festival and fasting,
The Danda Nata is still alive and popular!

At present lots of changes have come,
At night opera is performed as per public interest,
Melodious night attracts a huge gathering around,
Not only modern opera as per choice of people
But also ancient epics are performed in repertory,
Danda Nata is the first choice of people
Not only of Ganjam district but also of whole Odisha,
During Chaitra every street of the state dances
Witnessing huge crowd around the celebration,
The Danda Nata allows all to awaken for joy!

The City of Heart is also known as Silk City,
This City of Brahmapur is continuously awakened,
Due to Danda Nata gathering immense joy
The City is not sleeping whole day and night
Performance of epic story of The Ramayanais going on
Artists of Aladigada are alert in stage performance
With colourful clothing and prestigious light,
They are singing and dancing and giving joy,
Audience is hugely crowded around the stage
Beside this people's highway, the Janpath of Brahmapur
In between Kamapalli and Court-Peta Squares,
The Nata performed for whole night is all right
This is now graced by newly risen sun,
Sun-rays aregently touching the flags of Danda Nata,
A victorious day is declared by new child sun
From last day's sunset to next first sunrise of today
Still the festival is going on in this street
And in many other streets of this city,
Passengers of morning buses arrived into the city
The are too eagerly watching for a while
Without missing a moment of joy of the Danda Nata,
When the buses are passing slowly
In the opposite parallel street,
All are watching this beauty of graceful sunrise
Over this ceremonial street,
The golden sky is smiling very tenderly,
Sun has brought up grace of God for all devotees! 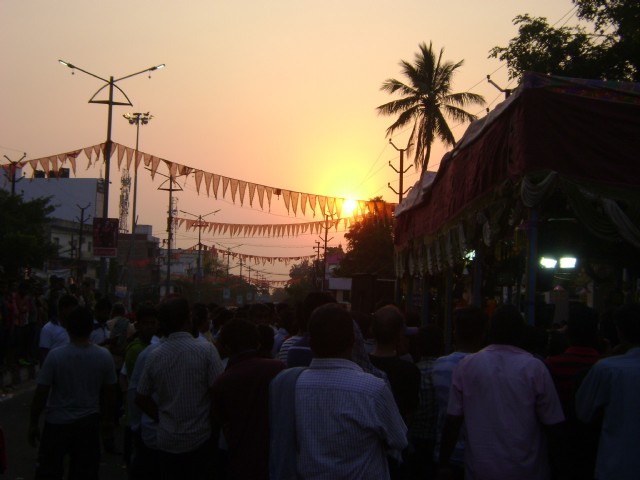 A poem capturing the festive activities of cleansing and purification, wonderfully written

This is a very nice and informative poem about such a celebration. For the first time I am hearing about the Danda Nata. Ancient festivals are really special and these are rare at present. I am very happy that you have nicely portrayed the imagery of sunrise as grace of God for this festival. A nice picture you have captured. Thank you very much for writing this lovely poem of historical importance.

Beautifully penned; I had attended this festival, your poem echoes what I had then felt. Great work.

The Danda Nata must be a night dance-festival of great joy. The city of Brahmapur is all the better for the exciting Danda Nata.

A lovely piece on an old dance form and festival rendered beautifully.

Ah! Sunrise has brought up greatest grace for this new rejuvenation and beautiful celebration. This festival is going on with great eagerness. Attentive audience is not only admiring but also motivating the artists. This poem deeply give us information about such a big festival of the Danda Nata.

Wow! Wow! The Dand Nata is most famous in your region and you have well explained its rituals. This is very informative poem for us. Wow! Darling poet Kumar, thank you very much. Have a great day dear sir darling. This deserves full 10. But where is the rating box?

Wow! Wow! Oh dear darling poet Kumar, the famous poet of the world. Just I have seen today the popularity chart of Poem Hunter and you are in top # 1 of the world among popular poet members within this circle. This is a great achievement dear poet. Wow! Wow! Congratulations! You are very kind and nice. Sometimes please visit my poems.

Each state and each community has its own indigenous art forms and practices! I understand that Danda Nata- a traditional dance form celebrated close to Chaitra Sankranti, is watched by throngs of people from all walks of life! This full night's celebration extending from sunset to sunrise must be an event eagerly anticipated by everyone! You have given a graphic description of the whole event! Thanks for sharing!

(4) . This almost epic poem deserves much much more than a 10 and the most admirable poet to me, my Master Poet Kumarmani Mahakul Sir is deserving the most. My hats off for thee, Sir. I give thee the most loving hug with precious care. My greatest salutations for thee as I most respect and adore as my Only Master Poet. God's Blessings in Abundance for thee and thy beloved family. Amen.10.