On a lazy summer afternoon
All of us boys were lying in the shade
Talking about all kinds of things
In a world we never made.

It'll be a while 'fore Mom calls us in for supper
What can we do to make this day an upper?
Let's hike over to the tracks of the old B & O
It's only about a mile or so.

So we took off, saying It'll be no sweat,
We'll watch some trains go by I'll bet.
We'll put some coppers on the track
They'll be flattened when we get them back.
They say if you put a penny in front of each driving wheel
The wheels can't get started even tho they're steel.

Anyways, we got to the tracks just in time
To see the Royal Blue hurtling down the line.
The Old Blue always comes by at five
Right on time, and that's no jive.

The beast was thundering along, hissing lots of steam
And belching black smoke, a young boy's dream.
We stood real close, with our jaws all slack,
The passing wind near knocked us back.

Golly Gee! That was some sight to behold!
I'll probably remember it when I get old. 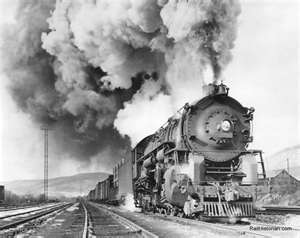 Love them old trains, and especially wonderful old tales of them, such as this one. Very enjoyable.

You brought me there.

Hi. its Angel here. No belching black smoke these days but still, the power and awe a Train holds as it hurtles by is something which will never change or the emotions it inspires in all. I could feel the hot air and hear the thundering roar of the beast you captured in your words, George.

You capture effectively man's awe in the face of the power of a passing train. I live near a track and have never lost that. In my mind, I can still see my now grown children run to the upstairs window at the distant whistle. I enjoy my grandchildren running to watch now.Thanks.