As you see universally
There is a great fall
Let love stretch its hands being universal
To love and teach us to love all,
...

I dream a world where man
No other man will scorn,
Where love will bless the earth
And peace its paths adorn
...

What civilization you do draw, man!
Enlightening some too little candles,
Beneath centuries' deep darkness is seen
Which is engulfing your own existence;
...

Their shadow dims the sunshine of our day,
As they go lumbering across the sky,
Squawking in joy of feeling safe on high,
Beating their heavy wings of owlish gray.
...


The power of charity sows deep in my heart, and I reap and gather the wheat in bundles and give them to the hungry.
...

This midnight bids farewell to parting year
Who then, on chariot Time, his seat vacates.
The New Year succeeds him as Charioteer:
To drive us on, he's waiting at our gates.
...

This door you might not open, and you did;
So enter now, and see for what slight thing
You are betrayed... Here is no treasure hid,
No cauldron, no clear crystal mirroring
...

And a merchant said, 'Speak to us of Buying and Selling.'

Perhaps I was born kneeling,
born coughing on the long winter,
...

Myth has it that the riches of the rich are good for all the people
And such a fable has got so many performances that it’s easy
To be swayed into thinking that it’s just the truth.
But when I see the eyes of the poor, aloof in their bare poverty,
...

You have laid your life in vain,
Worry was not for self main,
But the way it was to be put off,
Only because of jacket bullet proof,
...

When night came, his lips and tongue were parched, while his hand was still as empty as his stomach.
...

Mine, says the cat, putting out his paw of darkness.
My lover, my friend, my slave, my toy, says
the cat making on your chest his gesture of drawing
milk from his mother's forgotten breasts.
...

The gold-hoarder walked in his palace park and with him walked his troubles. And over his head hovered worries as a vulture hovers over a carcass, until he reached a beautiful lake surrounded by magnificent marble statuary.

He sat there pondering the water which poured from the mouths of the statues like thoughts flowing freely from a lover's imagination, and contemplating heavily his palace which stood upon a knoll like a birth-mark upon the cheek of a maiden. His fancy revealed to him the pages of his life's drama which he read with falling tears that veiled his eyes and prevented him from viewing man's feeble additions to Nature.
...

They mouth love's language. Gnash
The thirteen teeth
Your lean jaws grin with. Lash
Your itch and quailing, nude greed of the flesh.
...

Warmongers Are The Death Of Humanity. Clinton Siegle

Warmongers are the death of humanity.
Awkward to see American Warmongers.
Reality searching wars of warmongers.
Mongering for war over and over.
...

Don't believe everything you see, as real eyes see through real lies, speaking not, yet saying everything of it, like arrows shooting through the mind out of the blue, yes the human race is greedy as cold, the compulsion is too much to deny, and yet to bear new riches and tends in a defining moment in life, never is there honor in greed or wealth as well, is stupidity a factor in our lives? Or just live in genre, we are born innocent, until we falter, is anyone still innocent, why not find another way after all this time, while we can, when humans go in earthiness rich or poor, it's all flesh and blood, all the same humans are, a race of animals is all we are, greed kills, but they say who doesn't want wealth, knowing the truth helps being disillusioned is a fact, but deep down we are greedy, why can't there be peace?
...

The greed of every human stands naked when it come to sacrifice.
...

I've been a little greedy lately
The lure of a little sweet sun after thick fog!
We are really strange people
All our greed is strange.
...

Greed, the omnipresent demon
rampant everywhere
at every phase of life
greed for food
...

An avaricious man, for numbers of reasons,
Most of his friends were just as him too
Greed the father of patience and a trapper
Tramp so lacking, seemed Lazarus was better.
...

Fluttering wings and greed weary,
Poor fly is stuck in jaggery,
Caught in greed's gluey clout,
Struggling hard to get out,
...

Greed
The love of money is the key
Greed
When you treat your friends like their enemies
... 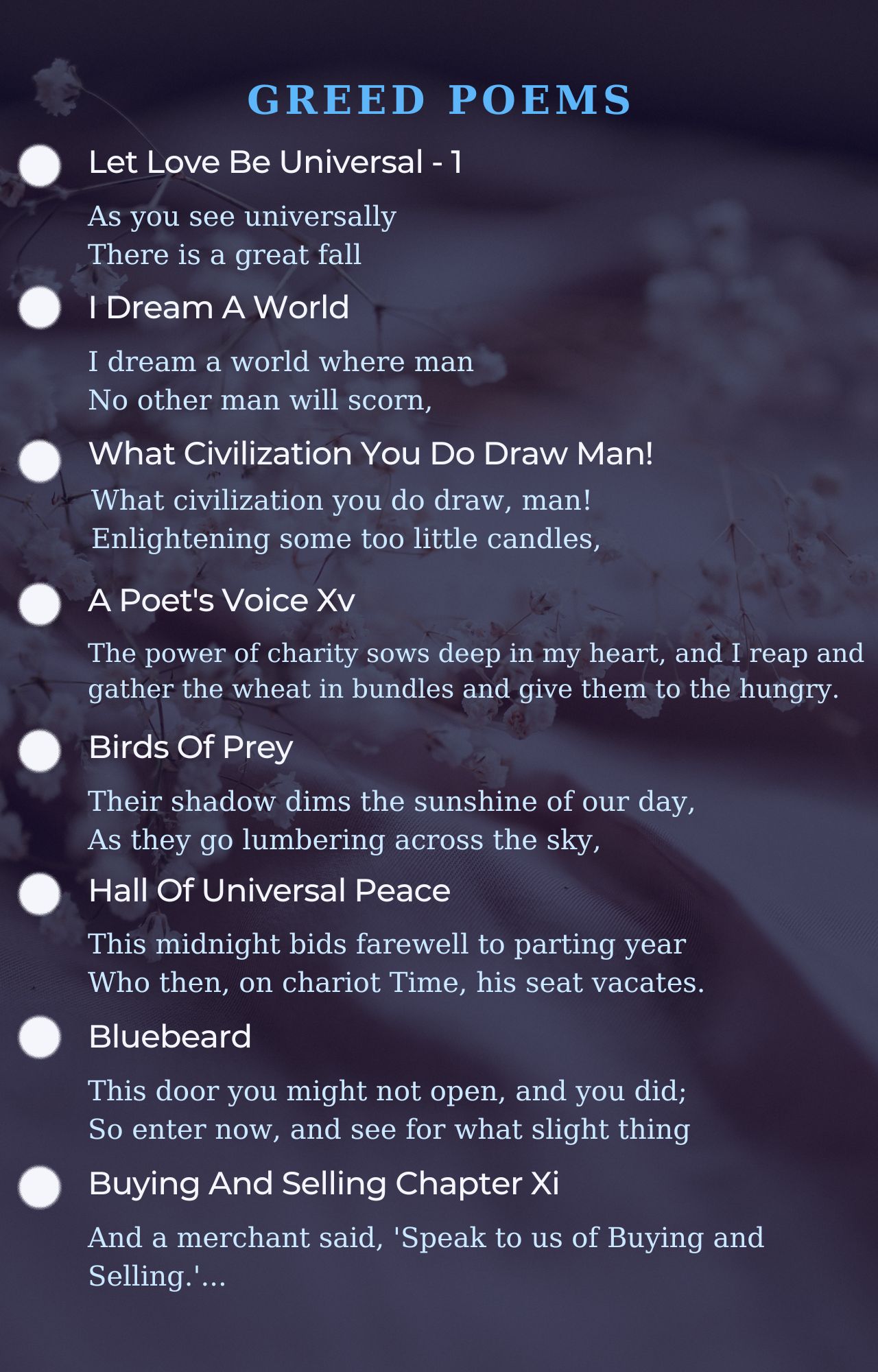