Anc And The Struggle Poem by Chinedu Dike

Anc And The Struggle

His growth fraught with perils
But nurtured by sons and daughters of the soil
Deprived of dignity and birthright
Whose principal offence is not being 'White'
Long Live Son Of The Soil!
Viva ANC!

His clarion call an impetus to the Struggle
Unifying localized forces of Freedom
Into mass-based Liberation Movement
Brought into the realm of Global Awareness
Long Live Symbolic Leader Of The Struggle!
Viva ANC!

Fighting against enormous odds
Together with hopeful but ill-equipped natives
Onto the spirit he anchored Power
Victory guaranteed on Resolve
Long Live Son Of Hope!
Viva ANC!

Braving the slammer, torture, bullet...
Massacre of his warriors the order of the day
Energized by tears and blood of compatriots
Civil Disobedience intensify with Sabotage
Long Live The Indomitable Warrior!
Viva ANC!


NOTES: Mzansi is the affectionate name for South Africa.

Depicted in the poem is the awesome story of
The African National Congress (The ANC)
as a Liberation Movement, from its inception
on 8 January 1908 up to its momentous victory
at the 1994 first generation election.

Since gaining political power, The ANC
has increasingly changed from a Freedom
Movement to an ordinary Political Party.

And for the suffering and disillusioned masses,
democracy has proved to be a mirage:
their once hopeful assertion of Black Rule
has become an anticipation of a flashy illusion.

The ANC albeit a shadow of its former self,
has continued to maintain political power
without pause through the power of thumb. 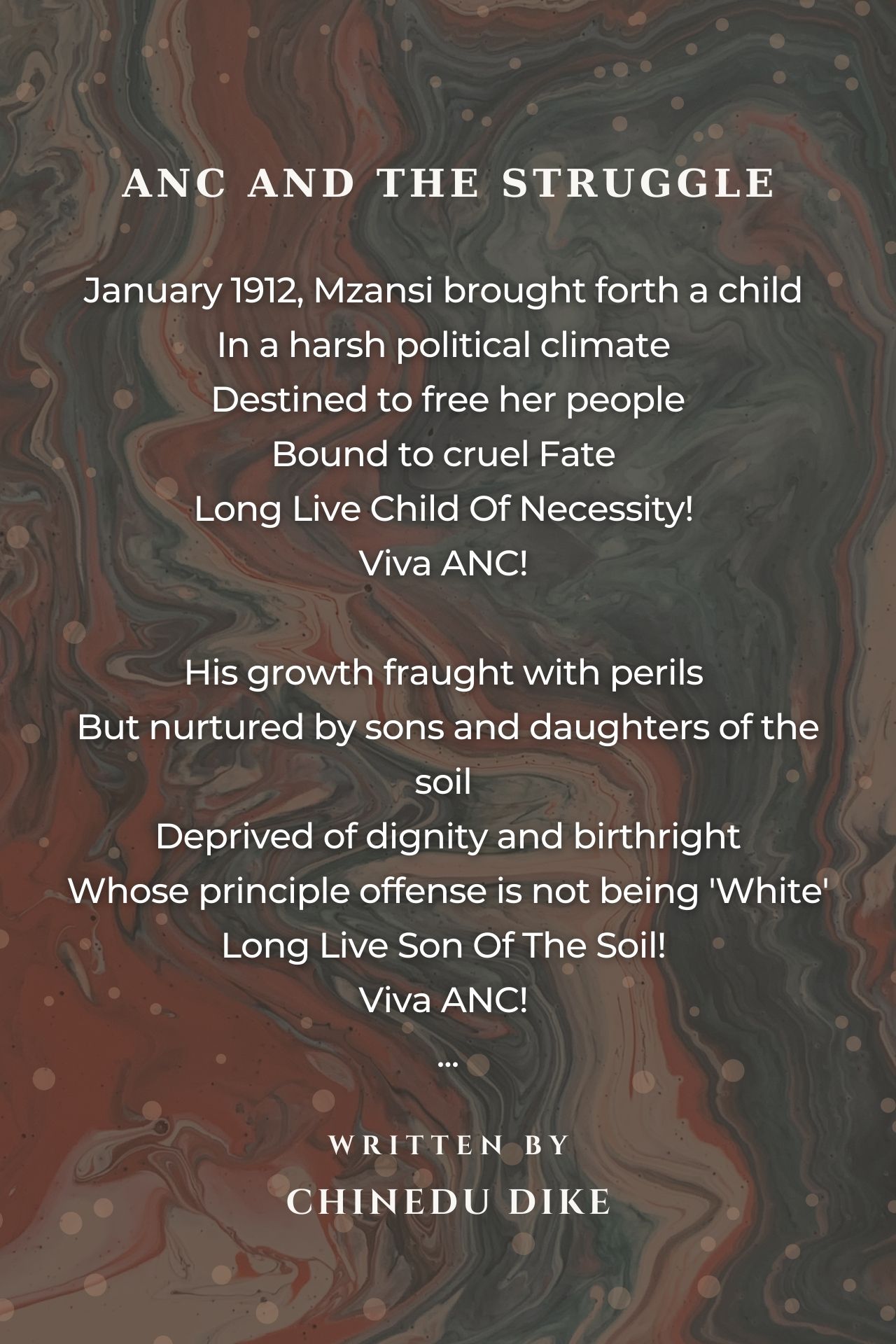 Brilliant write with such intense emotions beautifully delivered for the best impact about the struggle to end oppression! !

beautifully written and well formed description about the constant struggle! ! !

Hi Jawad, thank you sir for your kind words of encouragement and objective appraisal of my poems. Always remain blessed.

It expresses in beautiful and brilliant detail how the ANC liberated the people from the bondage cruel Fate.

Your rousing and beautifully written tribute to the African National Congress, is a joy to read.

Thank you Chinedu, your eagerness to pictures the great people is great. You have beautifully accomplished the commitments. Your noble mission is praiseworthy