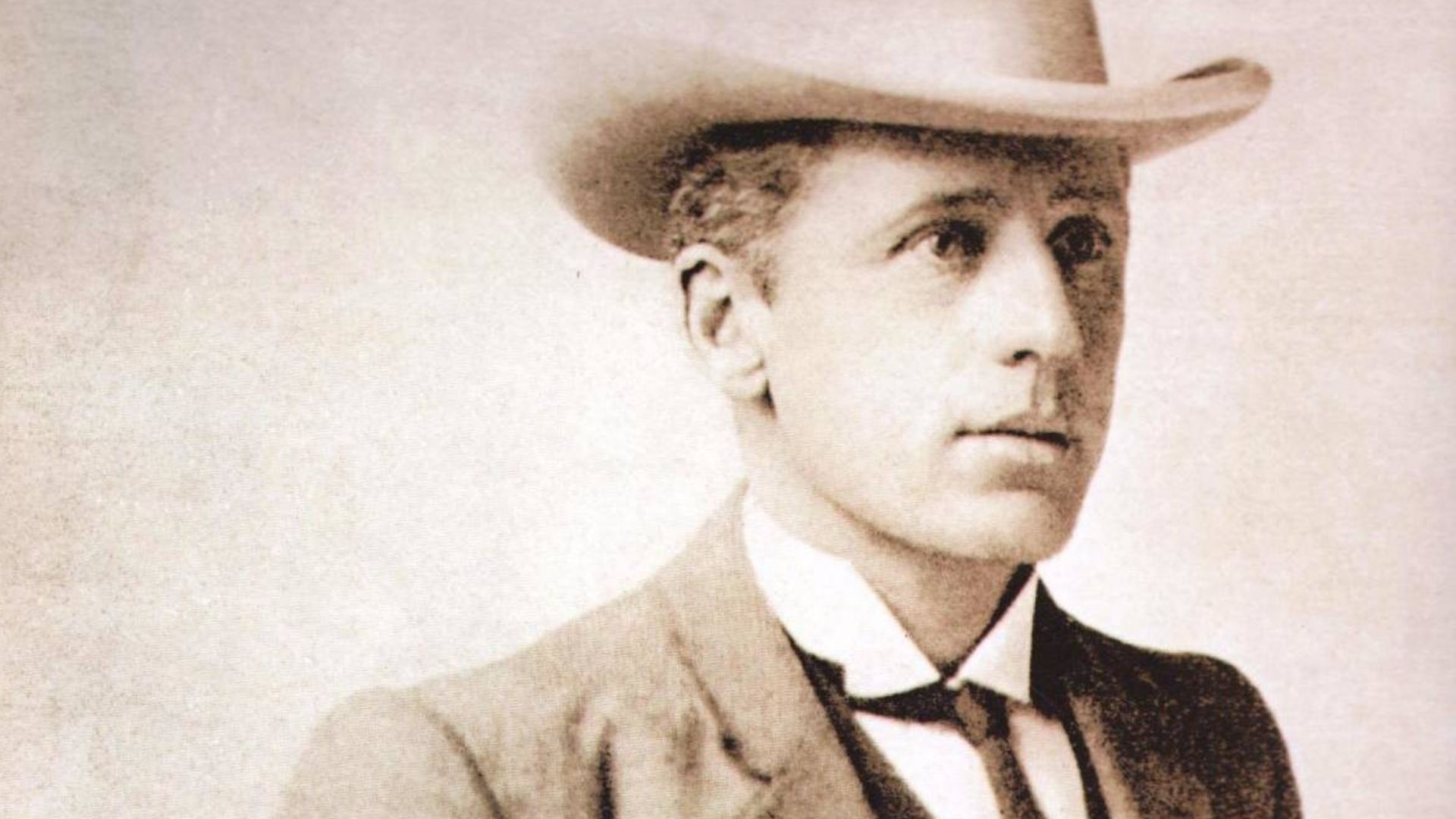 1.
The Man From Snowy River

There was movement at the station, for the word had passed around
That the colt from old Regret had got away,
And had joined the wild bush horses - he was worth a thousand pound,
So all the cracks had gathered to the fray.
...

Read Poem
2.
A Bunch Of Roses

Roses ruddy and roses white,
What are the joys that my heart discloses?
Sitting alone in the fading light
Memories come to me here tonight
...

Long ago the Gladiators,
When the call to combat came,
Marching past the massed spectators,
Hailed the Emp'ror with acclaim!
...

He had drifted in among us as a straw drifts with the tide,
He was just a wand'ring mongrel from the weary world outside;
He was not aristocratic, being mostly ribs and hair,
With a hint of spaniel parents and a touch of native bear.
...

Read Poem
5.
A Change Of Menu

Now the new chum loaded his three-nought-three,
It's a small-bore gun, but his hopes were big.
"I am fed to the teeth with old ewe," said he,
"And I might be able to shoot a pig."
...

When Ironbark the turtle came to Anthony's lagoon
The hills were hid behind a mist of equinoctal rain,
The ripple of the rivulets was like a cheerful tune
And wild companions waltzed among the grass as tall as grain.
...

Australia takes her pen in hand
To write a line to you,
To let you fellows understand
How proud we are of you.
...

You see, the thing was this way -- there was me,
That rode Panopply, the Splendor mare,
And Ikey Chambers on the Iron Dook,
And Smith, the half-caste rider on Regret,
...

OH! there once was a swagman camped in the Billabong,
Under the shade of a Coolabah tree;
And he sang as he looked at his old billy boiling,
“Who’ll come a-waltzing Matilda with me.”
...

'Twas Mulga Bill, from Eaglehawk, that caught the cycling craze;
He turned away the good old horse that served him many days;
He dressed himself in cycling clothes, resplendent to be seen;
He hurried off to town and bought a shining new machine;
...

It was the man from Ironbark who struck the Sydney town,
He wandered over street and park, he wandered up and down.
He loitered here he loitered there, till he was like to drop,
Until at last in sheer despair he sought a barber's shop.
...

Read Poem
13.
A Dream Of The Melbourne Cup

Bring me a quart of colonial beer
And some doughy damper to make good cheer,
I must make a heavy dinner;
Heavily dine and heavily sup,
...

We see it each day in the paper,
And know that there's mischief in store;
That some unprofessional caper
Has landed a shark on the shore.
...

Read Poem
15.
Clancy Of The Overflow

I had written him a letter which I had, for want of better
Knowledge, sent to where I met him down the Lachlan, years ago,
He was shearing when I knew him, so I sent the letter to him,
Just 'on spec', addressed as follows, 'Clancy, of The Overflow'.
...

Read Poem
16.
A Ballad Of Ducks

The railway rattled and roared and swung
With jolting and bumping trucks.
The sun, like a billiard red ball, hung
In the Western sky: and the tireless tongue
...

The chorus frogs in the big lagoon
Would sing their songs to the silvery moon.
Tenor singers were out of place,
For every frog was a double bass.
...

Not for the love of women toil we, we of the craft,
Not for the people's praise;
Only because our goddess made us her own and laughed,
Claiming us all our days,
...

I bought a run a while ago,
On country rough and ridgy,
Where wallaroos and wombats grow --
The Upper Murrumbidgee.
...

Read Poem
20.
A Singer Of The Bush

There is waving of grass in the breeze
And a song in the air,
...

The Best Poem Of Banjo Paterson

The Man From Snowy River

There was movement at the station, for the word had passed around
That the colt from old Regret had got away,
And had joined the wild bush horses - he was worth a thousand pound,
So all the cracks had gathered to the fray.
All the tried and noted riders from the stations near and far
Had mustered at the homestead overnight,
For the bushmen love hard riding where the wild bush horses are,
And the stock-horse snuffs the battle with delight.

There was Harrison, who made his pile when Pardon won the cup,
The old man with his hair as white as snow;
But few could ride beside him when his blood was fairly up-
He would go wherever horse and man could go.
And Clancy of the Overflow came down to lend a hand,
No better horseman ever held the reins;
For never horse could throw him while the saddle girths would stand,
He learnt to ride while droving on the plains.

And one was there, a stripling on a small and weedy beast,
He was something like a racehorse undersized,
With a touch of Timor pony - three parts thoroughbred at least -
And such as are by mountain horsemen prized.
He was hard and tough and wiry - just the sort that won't say die -
There was courage in his quick impatient tread;
And he bore the badge of gameness in his bright and fiery eye,
And the proud and lofty carriage of his head.

But so slight and weedy, one would doubt his power to stay,
And the old man said, "That horse will never do
For a long and tiring gallop-lad, you'd better stop away,
Those hills are far too rough for such as you."
So he waited sad and wistful - only Clancy stood his friend -
"I think we ought to let him come," he said;
"I warrant he'll be with us when he's wanted at the end,
For both his horse and he are mountain bred."

"He hails from Snowy River, up by Kosciusko's side,
Where the hills are twice as steep and twice as rough,
Where a horse's hoofs strike firelight from the flint stones every stride,
The man that holds his own is good enough.
And the Snowy River riders on the mountains make their home,
Where the river runs those giant hills between;
I have seen full many horsemen since I first commenced to roam,
But nowhere yet such horsemen have I seen."

So he went - they found the horses by the big mimosa clump -
They raced away towards the mountain's brow,
And the old man gave his orders, "Boys, go at them from the jump,
No use to try for fancy riding now.
And, Clancy, you must wheel them, try and wheel them to the right.
Ride boldly, lad, and never fear the spills,
For never yet was rider that could keep the mob in sight,
If once they gain the shelter of those hills."

So Clancy rode to wheel them - he was racing on the wing
Where the best and boldest riders take their place,
And he raced his stockhorse past them, and he made the ranges ring
With stockwhip, as he met them face to face.
Then they halted for a moment, while he swung the dreaded lash,
But they saw their well-loved mountain full in view,
And they charged beneath the stockwhip with a sharp and sudden dash,
And off into the mountain scrub they flew.

Then fast the horsemen followed, where the gorges deep and black
Resounded to the thunder of their tread,
And the stockwhips woke the echoes, and they fiercely answered back
From cliffs and crags that beetled overhead.
And upward, ever upward, the wild horses held their sway,
Were mountain ash and kurrajong grew wide;
And the old man muttered fiercely, "We may bid the mob good day,
No man can hold them down the other side."

When they reached the mountain's summit, even Clancy took a pull,
It well might make the boldest hold their breath,
The wild hop scrub grew thickly, and the hidden ground was full
Of wombat holes, and any slip was death.
But the man from Snowy River let the pony have his head,
And he swung his stockwhip round and gave a cheer,
And he raced him down the mountain like a torrent down its bed,
While the others stood and watched in very fear.

He sent the flint stones flying, but the pony kept his feet,
He cleared the fallen timbers in his stride,
And the man from Snowy River never shifted in his seat -
It was grand to see that mountain horseman ride.
Through the stringybarks and saplings, on the rough and broken ground,
Down the hillside at a racing pace he went;
And he never drew the bridle till he landed safe and sound,
At the bottom of that terrible descent.

Then they lost him for a moment, where two mountain gullies met
In the ranges, but a final glimpse reveals
On a dim and distant hillside the wild horses racing yet,
With the man from Snowy River at their heels.

And he ran them single-handed till their sides were white with foam.
He followed like a bloodhound in their track,
Till they halted cowed and beaten, then he turned their heads for home,
And alone and unassisted brought them back.
But his hardy mountain pony he could scarcely raise a trot,
He was blood from hip to shoulder from the spur;
But his pluck was still undaunted, and his courage fiery hot,
For never yet was mountain horse a cur.

And down by Kosciusko, where the pine-clad ridges raise
Their torn and rugged battlements on high,
Where the air is clear as crystal, and the white stars fairly blaze
At midnight in the cold and frosty sky,
And where around The Overflow the reed beds sweep and sway
To the breezes, and the rolling plains are wide,
The man from Snowy River is a household word today,
And the stockmen tell the story of his ride.

How right he was. Too late now. No heed was taken.

This Guy is a sick lad bruh.

Amazing discovery I've always wondered who Waltzing Mathilda, I like his work and will read more when time permits. Panmelys 205

THIS IS ALL FAKE FAKE p.s hi lol p.p.s jk

"Ava Caesar" is a poem for our time. Brilliant!

I love the Song of the Federation