Based Upon East-Indian Company Chronicles.... Poem by Sylvia Frances Chan

Based Upon East-Indian Company Chronicles....


She wrote out carefully
and with a steady hand
that denunciation of Chinese-Dutch Citizenship,

which has become a historical document,
and is preserved in the chronicles of the Indonesian Government
section East-Indian Company, Dutch Colonial Period
her first Ancestor Tam Bah Sya fell in love
with a dutch woman
this man full of love and a big heart
was sentenced to death
he was hanged
just like in the time of Rembrandt
but that was in the Dutch Golden Age
and this was in the latest of the 19th age
How do I know?
My genius bro gave a book to me
he told me to read that
our first fore-father who fled from the Chinese civillian war
came to reside in Batavia
dear young man Tam Bah Sya
the earliest history about him was noted
by Dr. Mona Lohanda
in her book about the Chinese descent in Indonesia
especially the ones in Batavia
that he got the death sentence
because he had fallen in love with a Dutch woman
if she did not respond, then perhaps nothing occurred
but this was truly blurred
they love each other passionately,
and he was in love with her so madly
but only he must die
and that woman not
so that time the Dutch Colonial Government had no God, I reckon
the nuns were nowhere to find, no pastors either
every citizen with a colored descent must die
if they don't obey the East-Indian Colonial Law
they will be hung or they will get the guillotine
but the citizens from Dutch origin
even that, they would be welcome as unseen
they needed not to pay a sum of money
either be sentenced to prison
no, all they got was just the words

By the grace of God: "Now you are not seen nor heard
please go away before things here go astray, t'is absurd

and my first ancestor
was so obedient
let himself be killed

no nuns, priest or pastor
ever guided him during his last hours

IF Mona Lohanda would not make her thesis
to have post graduation papers
then my bro would not have read that
thanks to her book, created on the internet

as her topic, she had taken a long time hidden subject
but still fresh as Indonesian-Chinese dewdrops
although night hath gone
the remains are still as fresh as dew....


The picture is of Jesus Christ and His Disciples.

AD. Friday the 19th January 2018,
accidentally created on the Birthday of Princess Margriet,
the Aunt of the present King Willem-Alexander of the Netherlands
@ 21.22 hrs. P.M. West-European Time 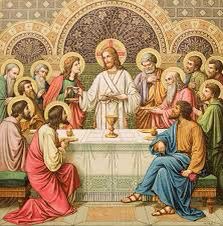 Sylvia Frances Chan
Friday, January 19, 2018
Topic(s) of this poem: death
poem poems graduation internet
Download image of this poem.
Report this poem
POET'S NOTES ABOUT THE POEM
Based upon true occurrences in the History of the East-Indian Company in Batavia. This theme is taken as the subject for her Post graduation Manuscript. Mona Lohanda wrote her manuscript. Congratulations Dr. Lohanda, thanks to you, I get to know that these most awful minutes had overcome my first ancestor in Indonesia, resp.the capitalBatavia, during the Dutch Colonialization in Indonesia. My genius bro and I had been laughing out loudly, because IF this first ancestor had not committed a "crime", in this period was for a "coloured" man falling in love with a "white" woman (a Dutch woman)a crime of the highest level, this man must get a death sentence: being hung. At the time of falling in love, he must not be aware of really getting the death sentence, he did not know at all, I reckon. Dr. Mona Lohandan only mentioned his name, and that IS our first ancestor's name. We, as the descents regard this as very untruthful, thinking of nowadays time, BUT the reality at that time was most truthful and that was why Dr. Mona Lohanda had taken this shortest written history about one of the chinese refugees in the East-Indian Company period as an example in her book. I say here about "chinese refugees", perhaps yes and perhaps because of the starving period in the South China Province/ area. I do not know for sure, but the reality was that the citizens were flooding from South China to many countries and one of them who fled to Batavia, either because of the civilian war or the starving period, but the fact was that that name that was mentioned by Dr. Mona Lohanda for her PhD book that was my first ancestor's name Mr. Tam Bah Sya. Otherwise my genius bro would not have bought this book for me.....and I would not have this poem created....WOW! IF this ancetor knew he would get the death sentence, he would not have committed this Love Crime (Crime Passionelle)I reckon, thinking that he fled from South China because of the starving period up there....OR...is Love really Blind? ! Not for me to decide, but I am happiest that Mona Lohanda used his name for her PhD promotion, or was he the only chinese refugee from South China, who was the only stupidest to fall in love.....OR he had of course already a family of his own and then is falling in love with a Dutch woman indeed a passionate crime....But I am as shocked by that death sentence as Dr. Mona Lohanda did, otherwise she would not have mentioned his name, perhaps his was the only name for this crime. WOW! My first ancestor was mentioned in the East-Indian Company Chronicles because of this occurrence....and not because he gained an honourable Title. That title of "Mayor of the Overseas-Chinese"or "Capitan of the Overseas-Chinese he had them all....and that Dutch woman knew this man had much money, he was very wealthy. The most absurd story was that the Pribumis were always waiting for him to finish his toilet routines, so that they would get money bills coming from his rest room. In those days the rest rooms were connected straight to the river outside. What a history that truly occurred. Recorrected AD Monday the 22nd of January 2018 by SFC, Dutch poetess
COMMENTS OF THE POEM
Dr Antony Theodore 01 April 2020

I get to know that these most awful minutes had overcome my first ancestor in Indonesia, resp.the capitalBatavia, during the Dutch Colonialization in Indonesia. But I am as shocked by that death sentence as Dr. Mona Lohanda did, otherwise she would not have mentioned his name, perhaps his was the only name for this crime. WOW! My first ancestor was mentioned in the East-Indian Company Chronicles because of this occurrence. from your poets notes. thank u. i learn a lot too. tony

because he had fallen in love with a Dutch woman if she did not respond, then perhaps nothing occurred but this was truly blurred they love each other passionately, He was in l ove with her so madly....... a love story and history combined and your great experiences that you received from reading and from others. tony