where at its center you are found
ten thousand light-years from the Earth,
for decades you have been renowned
not only for your tiny girth

because of being so compact
but also magnetism strong.
You're highly magnetized in fact
with period of spinning long

which makes a pulsar with your pace
one of the most extreme amid
procellous seas of outer space
observed in charted astro-grid.

They say about you, magnetar,
by X-ray telescopes discerned,
that you're a type of neutron star,
or so the scientists have learned,

created by collapsing throe
of supergiant star immense
from weight of gravity de trop
which left your core supremely dense.

Detected via ‘Chandra' reach,
in Sanskrit meaning ‘shining', ‘moon',
your properties have much to teach
through X-ray vision's extra boon.

You drew me to your pulsing source
like lighthouse beaconing its beam
as if by captivating force
within the pictured color scheme.

It's said that you are young at heart
perhaps with secrets still untold,
perplexities to stump Descartes.
What further wonders do you hold?

Researchers of the cosmic stream
are seeking verities to know,
yet things are seldom as they seem
and evermore shall be it so. 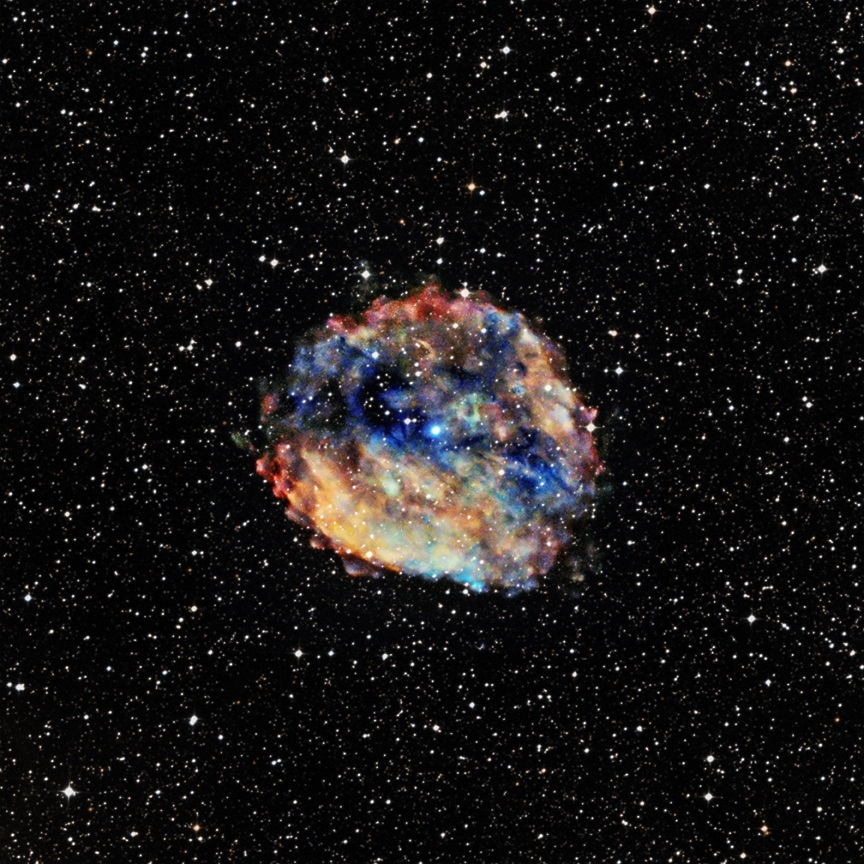 Harley White
Sunday, January 17, 2021
poem poems
Download image of this poem.
Report this poem
Poems By Harley White
Cosmic Jewels
Put Away Childish Things
Sculptor In Space
Epiphany
Cosmic Lens
See All Poems by Harley White
POET'S NOTES ABOUT THE POEM
Image and info ~ RCW 103: Young Magnetar Likely the Slowest Pulsar Ever Detected... Image explanation: The slowest spinning neutron star may have been detected using Chandra and other X-ray telescopes. The object is found in the middle of the RCW 103 supernova remnant, which is about 10,700 light years from Earth. While other neutron stars spin multiple times a minute, this object only rotates once about every 6.5 hours. Chandra data showed this object displays properties of a magnetar, a type of neutron star with extremely powerful magnetic fields. The composite image shows RCW 103 and its central source, known officially as 1E 161348-5055 (1E 1613, for short) , in three bands of X-ray light detected by Chandra. In this image, the lowest energy X-rays from Chandra are red, the medium band is green, and the highest energy X-rays are blue. The bright blue X-ray source in the middle of RCW 103 is 1E 1613. The X-ray data have been combined with an optical image from the Digitized Sky Survey. Credit X-ray: NASA/CXC/University of Amsterdam/N.Rea et al; Optical: DSS
COMMENTS OF THE POEM
Bill Cantrell 17 January 2021

Beautiful and fascinating as one would expect from the great Harley White, dear friend I am leaving this site going to all poetry site as I find it much better and they don't tolerate bully poets, I will always come to

A magnetic write, pulls the reader deeper and deeper into this clever worded neutron superstar!

This is a great write with scientific temper! My favorite lines, 'You drew me to your pulsing source like lighthouse beaconing its beam as if by captivating force within the pictured color scheme.' Appreciated and admired!

Your appreciative words are gratifying to read! Thank you for sharing your reaction! And I enjoy knowing which lines stand out for you.

This Beauty I add to my Favourites.

I'm delighted to know that!

A fascinating poem, excellently rendered, dear great Peetess! Having read your poems, you love to write about this part of the Universum. Congratulations having mixed Science with Poetry.5 Stars!

How gratifying it is to read your comment! Thank you! Yes, indeed this is a favorite subject of mine.

I'm pleased you enjoyed the poem. Thank you!