My heart's pumping,
My brain's starting gun has fired,
Watching Stephen Hawking on TV
Has made me feel inspired.

He's working out the laws of the Universe,
The mysteries of creation to unravel,
I still haven't fully grasped the rules
Of either Monopoly or Scrabble.

He agrees that the Universe is made from string,
As the Super String Theory suggests,
Whilst I thought string was only good
For making fishing nets and vests.

Despite my lack of brain power, I'm inspired
To challenge Stephen Hawking's theoretical Big Bang,
Surely if the Universe is made of Super String,
It would have been more of a Big Twang? 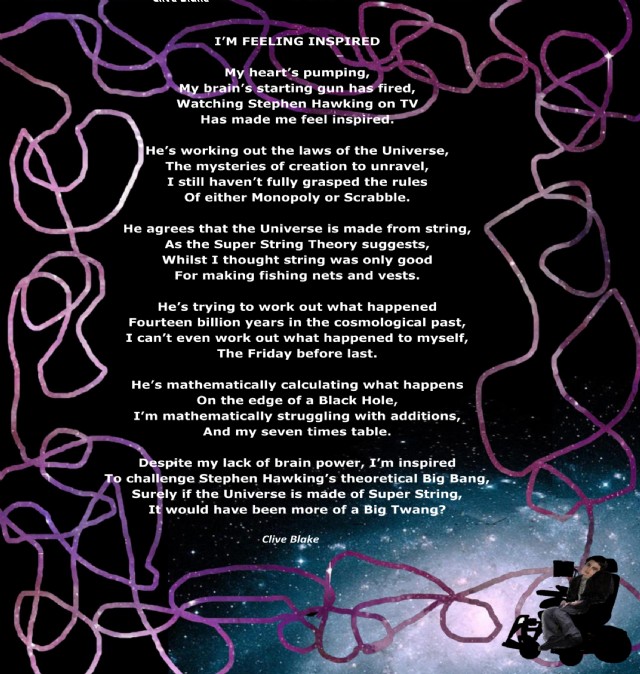 Clive Blake
Saturday, March 17, 2018
Topic(s) of this poem: astronomy ,atoms,cosmology,genius,mathematic,mathematics,science,space,time,universe
poem poems fishing
Download image of this poem.
Report this poem
POET'S NOTES ABOUT THE POEM
A tribute to Stephen Hawking who died on the 14th March 2018.Stephen was a genius but a genius who also had a great sense of humour.
COMMENTS OF THE POEM
Jayatissa K.Liyanage 20 March 2018

A touching tribute to a great personality in the world of our time. Congrats for the very deserved positioning. Thanks for sharing.

The story and life of Stephen Hawking has been a wonderful inspiration to all the scientists and all those who knew his work. Undoubtedly, he was a great genius. Thank you for a tribute to to this genius through your beautiful poem. Congratulations Clive!

Despite my lack of brain power, I'm inspired To challenge Stephen Hawking's theoretical Big Bang, .......a great tribute to stephen Hawking. liked it very much. tony

A great tribute to a great scientist who was physically challenged and still had the courage to travel far off frontiers of the universe.Nice poem. Enjoyed it thoroughly. Wish the great man rest in peace. Congrats on being chosen as POD.

a wonderful poem given like the present all gift wrapped and tied with string? ................well penned Clivel

An intresting poem with a lovely twist at it end. Thanks for crafting such lovely piece

This amazing, highly intelligent man in a wheel chair was loved and respected so much. A Genius. Wonderful poem and the way you have displayed your words with Mr Hawking's Photograph. Hope you framed it.

Thanks for your great tribute to the great genius Stephen. Congratulations for being picked as the member poem of the day.

Heel, wheel! To feel inspired. Thanks for sharing this poem with us.

He's mathematically calculating what happens On the edge of a Black Hole, I'm mathematically struggling with additions, And my seven times table. ...don`t you worry Blake many we share your calamity: -)