NOTE: I'm sorry to say today I find PH like before [as in case of 'I Want To Be Raped'] again banned this poem as I find it is not in my poetry list...so I've made some typographical change and reposted it and some comments already posted by Hon'ble Readers I'm posting here ~ niv

NOTE: TODAY JUST I DISCOVERERED THIS POEM HAS APPEARED IN ORIGINAL FORMAT BUT MY IN BETWEEN INTERROGATION SIGN MISSING AND I'VE ADDED IT AS THE STIGMA THEY TATTOOED ON MY POETIC CORPUS AND POEM [TYPOGRAPHICALLY CHANGED POEM WAS MOM BY DEFAULT R__APE ~ NIV [8.26 pm 30.07.12]


Our children
Will be known in
Moms' identity. [4]


We want
Our kids
Be not
Rapist
Or rape victim. [5]


We victims
Why 'only' solicit
Clichéd consolation
In slut walk? [6]


Sure we're
Our sons
Will by-default be
Male slut walker
For a paradigm shift! [7]


To symbolically
Absolve penance
Of: XY. [8] 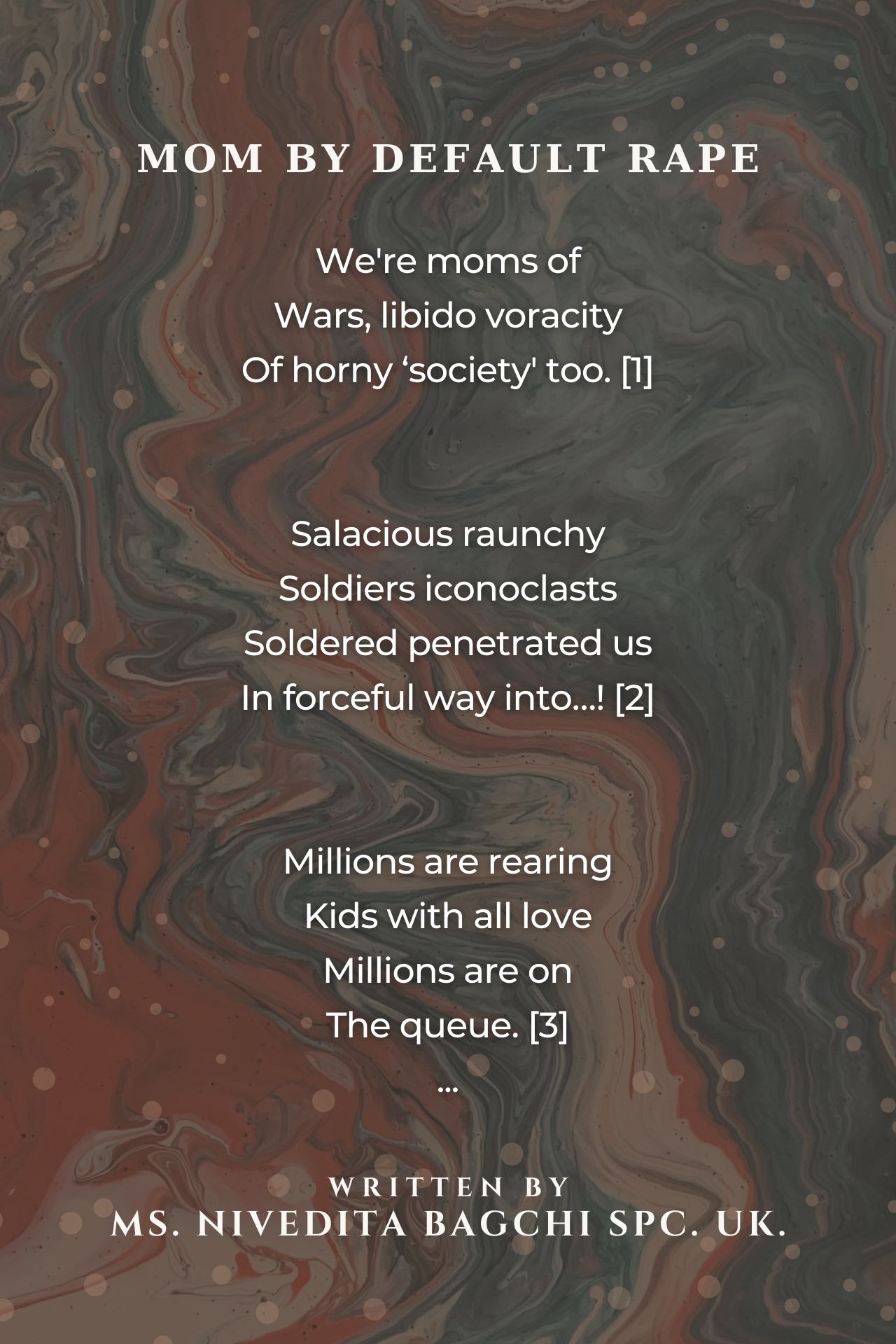 [1] Who are ‘War Babies'?
According to a report by from the War and Children Identity Project in Bergen, Norway, tens of thousands of infants have been born of wartime rape or sexual exploitation in the last decade alone [Grieg,2001].

[3] ABSTRACT
Sexual violence and exploitation are endemic in war-affected regions, and children are often produced as a result. It has been estimated that tens of thousands of children have resulted from mass rape campaigns or sexual exploitation during times of war in the last decade alone.
According to anecdotal reports and available evidence, these 'war babies' often face stigma, discrimination…. Children born as a result of war are entitled to the same rights as other children, outlined in the Convention on the Rights of the Child.

[Please note I've no such data on By Default Raped Moms other than wars till date, if readers can throw light please post in comment


I've a data that in USA every 2 minutes a woman is raped...it is 1st world country [read BOSS] of world in spite so much power and police &c resources they've failed to cut down percentage

Finally one info maximum rape in African counties specially in Congo which ticks high in percentage and it is utter regrettable in Africa Gang-Rape [one woman is raped by many] is frequent occurrences.

[On the eve of Slut Walk in Kolkata, [India] against RAPE this poem is humbly dedicated ~ niv]

[4]: Avant-garde: Active in the innovation and application of new concepts and techniques in a given field.

This is comment no ~ 2 Date & Time: 5/24/2012 5: 22: 00 AM Remove this comment Poem: 31269307 - ~ MOM BY-DEFAULT RAPE ~ Member: Indira Babbellapati Comment: dear ms bagchi it's taking the bull by its horns! i wish u wrote it in a much simple way minus all those pedantic frills for even laypeople to warm up to the issue and turn more concerned n sympathetic to the whole issue. people should be made to understand that war alone isn't the reason behind; we shd be made aware of several 'wars' resulting in gruesome rapes around us...

Verily, the poem depicts the saga of suffering of the war victims who were forcefully betrayed and left to live a life of guilt whereas the true guilty felt themselves victorious and this is the greatest shame on so called civilized.

A wave of emotions hits you with every stanza

Path of victory Is time tested Gandhian avant-garde Protest thro' Non Violence... Don't tell me you agree with non-violence. We're proud Moms of kids.... where does the pride come from? Proud of what? What happened forcefully was nothing but DIRT, a murder of the soul, the mind and the body and that's all. No glorification, then why glorify it? How can PRIDE even be anywhere close to the COMPLETE DIRT done to a woman? Sorry But I differ totally. Crimes like RAPES are an epidemic, it needs violence, stricter laws. Putting the blame on women's clothing is a nonsensical excuse, a man will rape any woman he can find at that time. Delhi is the rape capital and Haryana the rape village, and that's India. NO you can't change the culture, that's impossible, or change the mindset, another impossible. However, if there atleast were stricter laws, men wouldn't dare. Perhaps then, life would have been better for women who are (when not victims) in a state of constant dread and alarm. The world, India esp. would perhaps, be a place for everyone, but what can not happen will not happen and that's all the truth there is! ! Though I truly admire your presentation of wars and how it effects the women and the children. War is the time when nothing, nothing at all can hinder crimes! Very thoughtful and empathetic.

To say that the level of emotional conflict presented here is overwhelming is an extreme understatement. Yet I see hope through this vale of disharmony, tears and sorrow. Man's true source of being and groundedness is woman. Again, I must congratulate you on your eloquence with verbal frugality.

Moving, , and I learned something new