All of a sudden these words came down
from my caring and prudent mouth, like a cascade
A.D. Tuesday,15th October 2018 @ 9.31 hrs. A.M. West-European Time.

You have NEVER called yourself MASTER POET,
but I have done that since you most deserved that highest title here on Poem Hunter Poems site.

I was since 13 Dec 2011 here, but I seldom opened my poem site,
so I did not know anything new about the poets
who are submitting their poems, nor I knew their names,
except for the poets I have known on Poem Sites I had been either
but due to Master Poet Kumarmani Mahakul Sir
and his eldest son poet Dr. Pintu Mahakul,
I started coming here frequently
and reading their names on Poem Hunter,
included their ardent support,
I have the reason to submit and to keep the pages
open for a longer time.

Thank you so much once again,
Master poet Kumarmani Mahakul Sir!
My Master Poet at all times
and Dr. Pintu Mahakul, after he has
got his Doctor of Philosophy Degree,
he seldom submits, but recently he gave
his responses though on my Member Poem Of The Day
"Inspired By The Lord" on Poem Hunter as well as on FaceBook.

Master Poet Kumarmani Mahakul Sir,
Never have I read and found a poet so great
but so modest and sober,
just like I put an own mirror to ma face
and look into it, I see poetry, dearest poetry,
I see shadows but the darkness of the sweetest Lights:
I smell Jasmine, but scents of a unique perfume,
we can only find that in this area,
the area of dear loving, caring and sublime Master poets
and the sublimest are you,

truly, these words this morning says my soul
upon having thought about your generous heart
and the attachment you have with God, poetry, and poets altogether.

One I know so well is your eldest son,
not that we have the same age, on the contrary
I know him from several famous poem sites before
but we have in common that great shyness,
I feel that he is very shy in his doings and so am I,
this is only said by me since my senses know that,
sans having stood in front of him,
and he I admire so much too,
and all your other family relatives, your lovely épousse,
and your youngest son, poet Mantu Mahakul,
only he is the one who writes the least poems,
but he is also a cute and polite son,

perhaps no one can understand what I am writing about,
but you do, Sir, that I am sure.

I respect you and I appreciate you most
together with your beloved family.

I have been to your country recently,
and my best acquaintance told me
that there are other things occurring in India,
and that I must hasten to go back
since it is not safe for women traveling alone
and there was said more things,
which shocked my senses,

I always believe warnings,
since I "feel" that the warnings are true.
That was not and never it was in Nepal
when I was there to listen to the most beautiful songbird all times,
aside from these all, I never stay in a country more than a fortnight.
I will continue my "preachings" another time,
I want to repeat too: thank you once again, Sir,
for all the 10's and full Vote given,

I regard you as one of the fewest poets,
who never says untrue things
that I can see in the reflections of your eldest son
Dr. Pintu Mahakul´s words,
as I have written all these down,
my being is touched again tremendously by your generous heart,
caring soul and loving words,
which are still echoing in my inside.

Thank you deeply from my being, heart, and soul.
God's Blessings be in Abundance for you and your beloved family.
I am touched immensely by the person behind your poetry, Amen,

ADDITION:
I have inserted here the copy of the cartoon that I have drawn
when I was 11 years old, and do you know why?
YOU, dear Master poet, had given unto me
a Title of Honour: Wonder Jasmine

du moment of having read that you just published the poem
on Poem Hunter with the lovely Title:

"Attention To Titles Of Honour (Part 1)"

I was shocked very much. WHY?
The Title of Wonder JASMINE,
that particular name of "Jasmine" reminds me of the Cartoon Series
I had drawn when I was still a child of 11 years of age,
and I gave the name to that Cartoon JASMIN,
the editor of that Youth Section told the readers (then still in Jakarta, Indonesia) that I probably meant the word JASMIJN (Dutch)
or the English JASMINE. The editor Mrs. Aimée Lyssen did not send back to me the cartoon series, because of that word mistake, she corrected that, saying: Sylvia is just 11 years old, she has not got tuition in the English language, but published that though.
I wrote back to her, telling her that I love the name of JASMIN for my cartoon series and I knew already that the English word IS Jasmine, but I prefer to use "Jasmin" for my cartoon series, this name sounds firm and stronger in my 11 years old ears.

Must be added here that poetess SSK on Poetfreak.Com created the Tribute JASMIN for my Birthday on the 14th of November 2015 and at that time, on that moment, she was with me in my country, in my home, she saw in the backyard the sight of the lovely hedge with the Ivy. She stayed in my home for three months (the longest a person may stay, rules from the Dutch Government) . What I wanna tell you is, that SSK had also seen my Cartoons titled JASMIN and the Ivy hedge in my backyard. I was very happy with her Tribute on my Birthday. That was truly a Big Surprise. I have still my cartoons due to my only bro, he had kept that for me and gave them (all those Youth Section papers) to me personally when he came to NL. About this Tribute poetess, SSK created and published for me on Poetfreak, you Sir, must know.

I was happiest at that time since Mrs. Aimée Lyssen published my cartoon series in 3 or 4 sequels. Text and drawings by Sylvia Tjan pronounced as "Chan". The cartoon you can see here are the First and Second Sequel. Readable here on the picture.

For you to know. The cartoon series goes about
the Unhappy Princess in the Far Far Away Land of Jasminia
in the ancient year of 1143. Its Title: JASMIN.
These cartoon series were published in the Youth Section of The Java Bode Newspaper. I still have the original Youth Section Newspapers, my bro kept them for me when I moved to the NL and gave them back as I was settled in the new residence. Can you imagine: he is such a precise caring person that he had kept all the personal things I left e.g. drawings, aquarelles, diary, pieces of papers with my notes and poems.

PLUS-ADDITION:
I got the title "Wonder Jasmine" from Master Poet Kumarmani Mahakul Sir here on Poem Hunter Poem Site. I am humbled, honoured and happiest. Published Today on PoemHunter Poem Site and at this hour.

I cite here the First two Stanza of the Poem
"Attention To Titles Of Honour (Part-1)"
Master poet Kumarmani Mahakul Sir published
on the 30th of September 2018 - In his residence in India.

The First two Stanzas are:

I am humbled, honoured and happiest.
Published Today on PoemHunter Poem Site and at this hour. 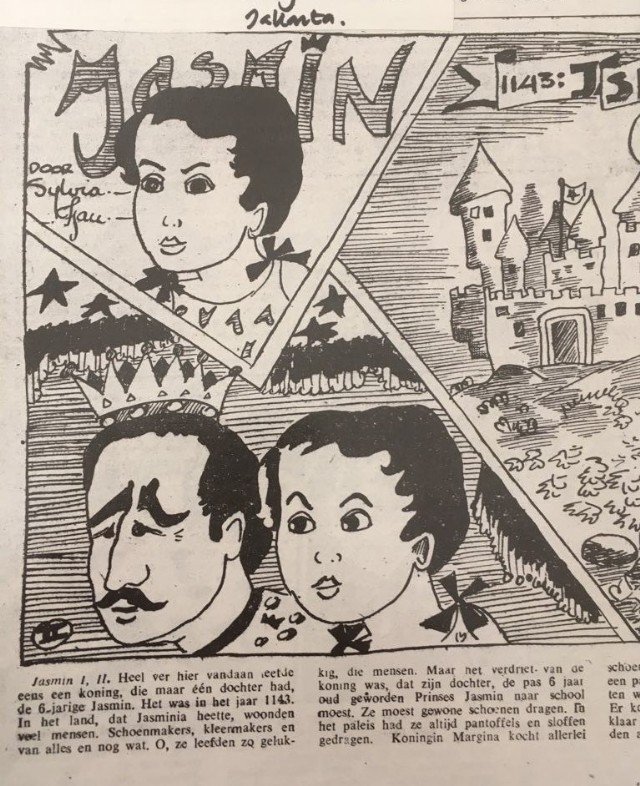 All of a sudden these words came down
from my caring and prudent mouth, like a cascade
A.D. Tuesday,15th October 2018 @ 9.31 hrs. A.M. West-European Time.
I have the urge to publish these words....


For YOU to know:
The cartoon series about the Unhappy Princess in the Far Far Away Land of Jasminia was titled JASMIJN in Dutch and in English: JASMINE, which I have drawn when I was just 11 years old and these cartoon series were published in the Youth Section of The JB Newspaper In Jakarta, Indonesia. (The country of my Birth)I still have the original Youth Section Newspapers.
Anno Domini the 19th of October 2018 - at 9.51 hrs A.M. West-European
Published Today at this hour. Please, look at the cartoon I drew at 11 years of age with just an ordinary school pen and with east-Indian ink. Thank you so much for all your sweet attentions and sympathetic comments.

Thank you so much once again, Master poet Kumarmani Mahakul Sir,
I am humbled, honoured and happiest.
I remain gratefully yours,
Sylvia Frances Chan, Dutch poetess, Evangelist, World Traveler.

Since Today on known on Poem Hunter Poem Site as:
Wonder Jasmine Sylvia Frances Chan,
The Honour is offered to her by the Grace of God. Amen.
Anno Domini Today and at This Hour.


Must be added here that poetess SSK on Poetfreak.Com created the Tribute JASMIN for my Birthday on the 14th of November 2015 and at that time, on that moment, she was with me in my country, in my home, she saw in the backyard the sight of the lovely hedge with the Ivy.
The name JASMIN at that time when I was 11 years old, I prefer to JASMIN than as my Youth Section suggested, since I regard JASMIN sounds stronger and has more power than JASMINE. I was not only shy, but in an artistic way, also a tiny bit stubborn. When 11 years, I could explain already that I wished to keep the name JASMIN, it sounds powerful. Thank you for reading.G.B.U. All. Amen.
COMMENTS OF THE POEM
M Asim Nehal 22 October 2018

Fantastic gesture and nice way to pay back though it is very difficult to repay his generosity.

(A) I had never the intentions to pay back as you assumed here, but I wish to show my great emotive feel and my being very grateful to Master Poet Kumarmani Mahakul Sir here in Poem Hunter poem site so that each member will know about that (my being grateful to him) see (B)

Revisiting this poem we feel very happy. This has refreshed once gain our old memories. May God bring happiness for you!

Thank you so much for all my dear poet friends, for your precious visit and kindest responses on my poem site. God's Blessings Be Greatest to you all. Amen.

A grand letter presented as gift in poem page. You are great poetess. Nice and 10

Thank you for your kindest response and comment, Flower Prince, beautiful name for a poet, good feedback you have given and thank you for the 10. Your visit to my poem site is most appreciated.

Congrats for getting title! You deserve for this. Kumarmani is a nice poet who is kind enough. Sylvia is Dr. Pintu Mahakul is also a poet.? ? First time I am hearing from you. I have not read yet his poems. You are generous, kind and genius poetess.

Thank you for your felicitations, DD, your visit to my poem site I most appreciate. I feel happy to get the title. Indeed, Dr. Pintu Mahakul is a poet since his junior high school years, just like me. DD i feel honoured and humbled, thank you so much for your precious compliments. G.B.U. Amen.