In the seventeen hundreds one April night,
while surveying the cosmos, Herschel caught sight
of a galaxy new, small, sidereal,
brilliantly lit in ethers empyreal.

An astronomer with a groundbreaking view,
William Herschel composed and played music too.
Then later came Hubble with tuning fork scheme
thus to further the classification theme

of galactic objects by morphology
adding greatly to modern cosmology.
What Herschel discovered was a spiral one
that's millions of light-years away from our Sun,

though its shape lacks the coils that seem to unwind,
with central bulge missing and arms undefined.
Now with intricacies as never before
a telescope captures the details galore.

Stelliferous pinpoints and flashes of blue
on celestial canvas of ebony hue
show deep shades of cyan as well as turquoise
for newborn stars sprinkled with masterly poise.

Could it be a Seurat, Signac, or van Gogh,
in the brushwork distinctive we've come to know,
as unperceived painter with stellar command
has dotted this starscape with pointillist hand?

Those who turn their gaze upward find astral arts
all over the heavens, which tug at their hearts
and awaken great gratitude for life's breath
on the Earth, where we sojourn from birth to death… 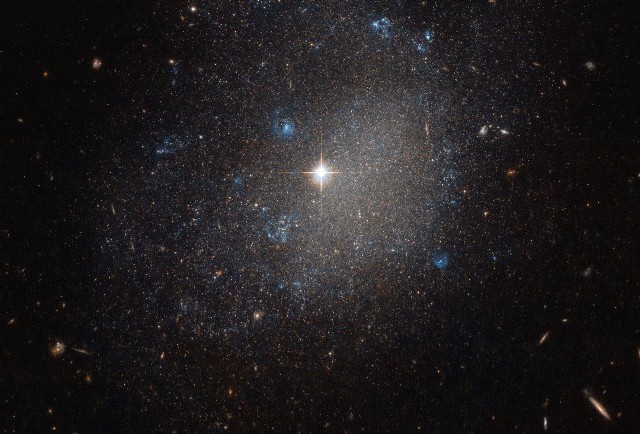 Harley White
Thursday, January 12, 2017
Topic(s) of this poem: astronomy
poem poems april hunting
Download image of this poem.
Report this poem
POET'S NOTES ABOUT THE POEM
'Be clearly aware of the stars and infinity on high. Then life seems almost enchanted after all.'
~ Vincent van Gogh

Inspiration for the poem, which includes the image, was from article called 'Astro-pointillism'…

inspritations for your poetry? You attribute to images and artists, they can't compare to your poetry, this picture accompanying your poem is profound and awe inspiring, but your words breath life into it, ...deep shades of cyan...and turquoise, those who turn to gaze upward have their hearts tugged, yet when one looks at your poetry....not only are their hearts tugged but life is explained in a way that makes me be humbled, I look upward at your poetry....way above my ability to write...and I stare in amazement!

Your remarks which truly humble me also provide some reassurance that I have, at least to some degree, reached the hearts of others and brought the heavens closer to our earthly grasp. Thank you, Bill, for taking the time and trouble to delve so deeply into my poems!