It was a time when you could buy a candy bar or a soda pop for a nickel, and Kit candies came in a four-pack, individually wrapped and then the entire package wrapped together, all for a penny. It was a peaceful, trusting time when everybody knew everybody in our small town and nobody ever locked their doors.

I was at a friend's house one evening when his mother asked me if I liked cold chicken. I had never heard of such a thing before. It was at this same time that I learned that some families sometimes had food that they called "leftovers". We had never had those at our house, either.

Back in those days when I was young and foolish, back before we knew that we were "downwinders" and played outside every day in the radioactive fallout, after Sputnik but before we ever heard of beatniks, back when our only family vehicle was a 1949 Dodge Pickup truck, when we had no TV, no telephone, no computers and no internet, we had to think of creative ways to amuse ourselves.

U. S. Highway 89 south of Richfield, Utah, was (and still is) a two-lane highway, one lane in each direction. I used to like to thrill (or was it terrify?) my two younger brothers, when there was no oncoming traffic, by driving into the opposite lane and telling them I had to do it to pass "the invisible Jeep".

I don't believe either one of them ever asked me how I knew the Jeep was there if it was invisible.

I'm also pretty sure that when they got old enough to drive, there were times when they had to pull into the opposite lane to pass the invisible Jeep, too.

The invisible Jeep has been gone from Highway 89 and from my memory for decades now. What caused it to suddenly appear again today? How many other hidden memories are waiting to spring out at the right moment?

I'm also pretty sure that when they got old enough to drive, there were times when they had to pull into the opposite lane to pass the invisible Jeep, too.
Read More 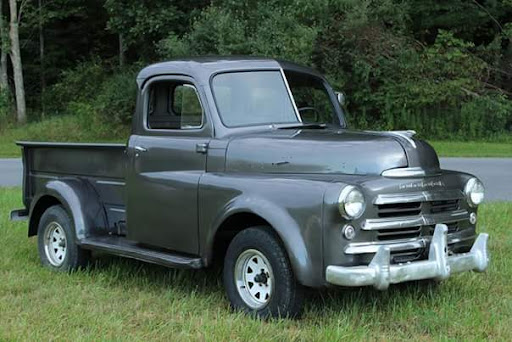 Kim Barney
Sunday, July 25, 2021
Download image of this poem.
Report this poem
poem poems
POET'S NOTES ABOUT THE POEM
Written 19 July 2021, in Evanston, Wyoming, U. S. A.
READ THIS POEM IN OTHER LANGUAGES

In the picture is a 1949 Dodge pickup truck, similar to the one we had back then, and which we used to pass the invisible Jeep.

Wonderfully told memories, vividly amusing, real and tender. However, can we consider it a miracle that you can retell them after trying to avoid 'the imaginary jeep ' so many times and not meeting an 'imaginary car' head on, too. God does look after poets, for no one else will. Be

What a concept! An invisible Jeep that needs to be passed! Your imagination ran rampant in those days! Thoroughly enjoyed reading this nostalgic account.

A wonderful and great remembrance of yesteryears. Informative and entertaining. Thank you, Kim, for bringing us into that peaceful and trusting time. Amazing story on cold chicken and invisible jeep. Top Marks! ! !

I did like the cold chicken, by the way!

Kim, Wonderful story of a time that is no more.