O! say can you see, by the dawn's early light,
What so proudly we hail'd at the twilight's last gleaming,
Whose broad stripes and bright stars through the perilous fight,
O'er the ramparts we watch'd, were so gallantly streaming?
And the rockets' red glare, the bombs bursting in air,
Gave proof through the night that our flag was still there -
O! say, does that star-spangled banner yet wave
O'er the land of the free, and the home of the brave?

On the shore, dimly seen through the mists of the deep,
Where the foe's haughty host in dread silence reposes,
What is that which the breeze o'er the towering steep,
As it fitfully blows, half conceals, half discloses?
Now it catches the gleam of the morning's first beam,
In full glory reflected now shines on the stream -
'Tis the star-spangled banner, O! long may it wave
O'er the land of the free, and the home of the brave.

And where is that band who so vauntingly swore
That the havock of war and the battle's confusion
A home and a country should leave us no more?
Their blood has wash'd out their foul foot-steps' pollution,
No refuge could save the hireling and slave,
From the terror of flight or the gloom of the grave;
And the star-spangled banner in triumph doth wave
O'er the land of the free, and the home of the brave.

O! thus be it ever when freemen shall stand
Between their lov'd home, and the war's desolation,
Blest with vict'ry and peace, may the heav'n-rescued land
Praise the power that hath made and preserv'd us a nation!
Then conquer we must, when our cause it is just,
And this be our motto - 'In God is our trust! '
And the star-spangled banner in triumph shall wave
O'er the land of the free, and the home of the brave. 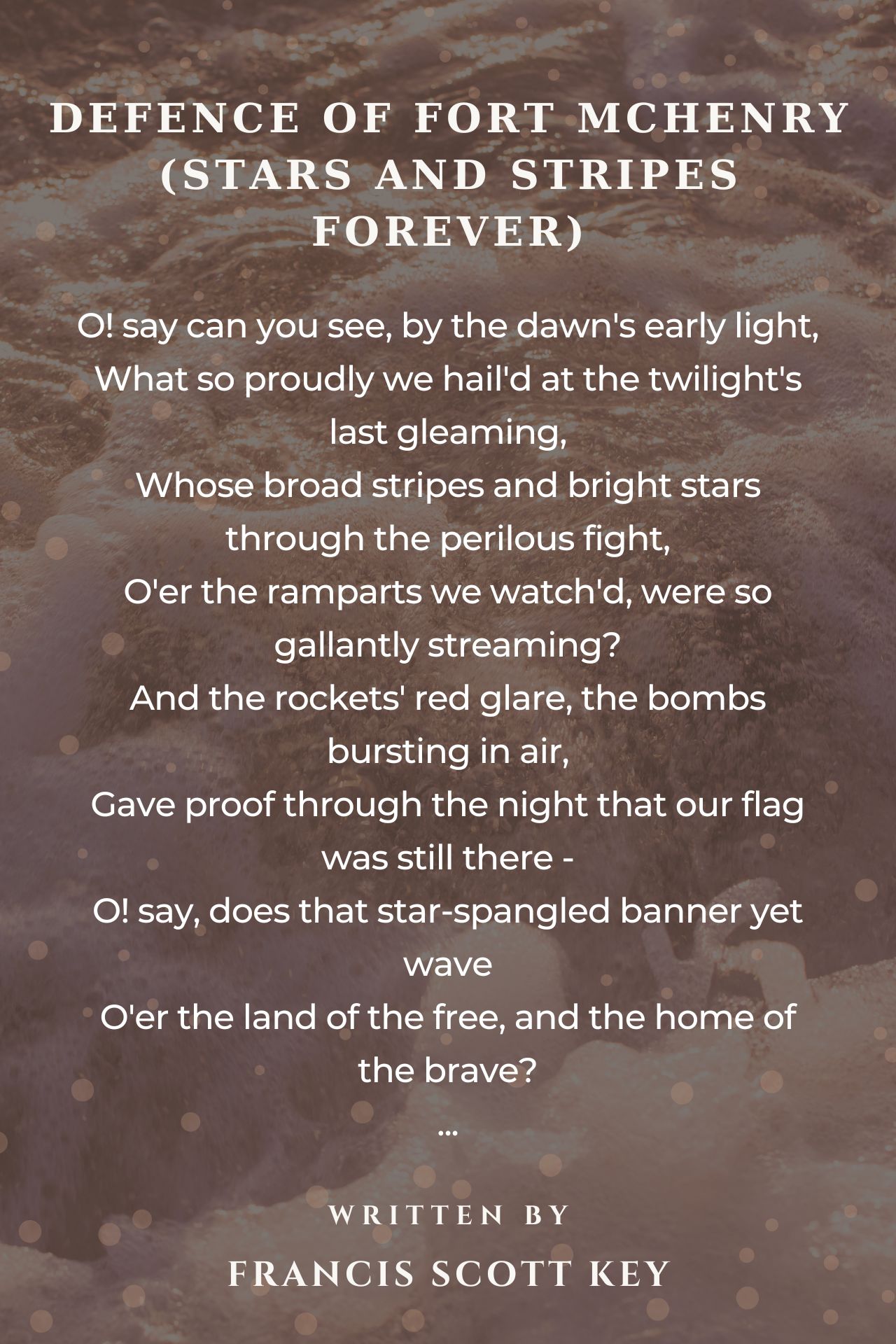 the home of the brave is ironic - having defeated the British the Yanks bravely turned their guns on the native Indians (the braves) and wiped them out. Also ironic is the land of the free when it is considered how many slaves there were in America.

Francis Scott Key began writing the patriotic poem ‘Defence of Fort McHenry’ on the morning of September 14th 1814. This was the day after the attack had begun on the 13th and Key was inspired and surprised by the sight of the American flag still waving above Fort Henry, after having watched the bombardment during the night. The first verses were jotted down on the back of an envelope and the words were composed to the tune of “The Anacreontic Song” also called “To Anacreon in Heaven”. This was a popular British drinking song composed by John Stafford Smith (1750-1836) . The poem was completed and titled at the Indian Queen Hotel. The first two lines of the poem are important to give the historical context. There is perhaps surprise and definitely justified pride in ‘O! say can you see, by the dawn's early light, /What so proudly we hail'd at the twilight's last gleaming’. So what does this mean and was there a ‘perilous fight’? Was Key accurate in writing ‘O'er the ramparts we watch'd, were so gallantly streaming? /And the rockets' red glare, the bombs bursting in air’. Who were the 1,000 American soldiers at Fort McHenry facing? They are facing British combat veterans triumphant from defeating Napoleon the previous year, under seasoned officers like Major General Robert Ross. This British Army had already overrun the American defence at the Battle of Bladensburg. Then marched into Washington D.C. unopposed by military defence, and burned and looted public buildings, including the White House, Capital, Treasury and War Department. Next American defenders at Fort Warburton fled without firing a shot and Alexandria surrendered. In contrast at Fort McHenry under Major George Armistead, defiant American soldiers have just withstood 25 hours of bombardment from a British fleet of nineteen ships just beyond the range of Fort McHenry’s cannons. The Congreve rockets were fired from the rocket vessel HMS Erebus, from a 32-pound battery installed below the main deck through portholes or scuttles. The rockets were unreliable and highly inaccurate but used as a psychological weapon of terror. Combined with the mortar shells, explosive shells fired in a ballistic arc from the bomb vessels, with the dread names HMS Terror, HMS Devastation, HMS Meteor, HMS Volcanco and HMS Aetna, these terror weapons must have terrified the inexperienced defenders. Yes ‘the rockets' red glare, the bombs bursting in air’ is totally accurate. In addition 1,500 to 1,800 cannonballs were fired at the fort, therefore the pride of the defenders, who fired on this ‘foe's haughty host’ should not be slighted. These men earned their immortal glory with courage under fire. The poem is on display by the Maryland Historical Society under the title the 'Star-Spangled Banner' poem. The lyrics of only the first and fourth stanzas became the National Anthem “The Star-Spangled Banner” in 1931, although only the first is usually sung.

A majestic and inspiring poem of the land of opportunities called America! Wonderful to read!

My g g g grandfather once remarked to his first cousin Francis that, that poem you wrote will bring you fame. Mr Craddock describes it all quite well. Francis was detained onboard a British prisoner of war exchange ship during the battle, so he and those with him observed the battle from the English POV first hand. Francis was a lawyer apparently helping in obtaining a release for some capture American soldier.

Uh, Star Spangled Banner, you mean. Stars And Stripes Forever is the one with Hoo-rah for the flag of the free / May it wave as our standard forever. Don't send a soap opera fan to edit a science fiction blog.

Reading the first stanza, I think of Whitney Houston singing 'The Star-Spangled Banner'.

It never stops being beautifully defiant

Francis This is an interesting piece of poetry keep it up

I would like to translate this poem
Poems By Francis Scott Key
Before The Lord We Bow
Song
Lord, With Glowing Heart I'd Praise Thee
Defence Of Fort Mchenry (Stars And Stripes Forever)
See All Poems by Francis Scott Key
Next Poem
2 / 4
Previous Poem