Rating: ★4.8
Our hearts are heavy,
Our souls are weary,
Our eyes are blurry.

They died! !
They woe- -fully died!
We cried! !
We uncontrol- -lably cried!
Some mother- some new bride;
Also children - what does this imply?
Precious lives taken for a ride
By this FLAME OF FLOOD.

Some went to seek shelter
Under which to bide;
Some - to buy oil
But the which they were fried
Homes are lost;
Families are displaced.
Hopes are lost,
What can replace?
This Tragic Holocaust
has many lives erased.

Friends -
Kindred -
All are gone.
Some aged -
some youth -
some unborn.
Great people -
Future leaders -
For this we mourn.
We shall them in our hearts adorn.
Ghana cries for a new dawn.

Hearts are heavy
Souls are weary
Eyes are blurry 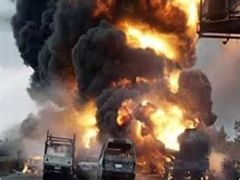 Abossey Allotey
Friday, July 3, 2015
Download image of this poem.
Report this poem
Topic(s) of this poem: tragedy
POET'S NOTES ABOUT THE POEM
On the eve of the 3rd of June 2015, Ghana my homeland was met with a tragedy; double tragedy which took the lives of over 200 souls including children. It rained heavily that night and in one of our central market areas, the whole place flooded and the flood was mixed up with petrol from a leaked tank in a fuel station. By then some people had gone to take shelter at the fuel station. Other passenger vehicles too have packed there because they couldn't move. The flood caught fire because it it was mixed with the petrol. Almost the whole place caught fire because there was water travelling with petrol everywhere. Many got burned and several others drowned.
A sight you wouldn't like to watch twice.
READ THIS POEM IN OTHER LANGUAGES

I would like to translate this poem
COMMENTS
Kumarmani Mahakul 02 April 2019
Death provokes thought. Souls motivate mind to gain life with safety. This is a thought provoking poem brilliantly penned.10
0 0 Reply
George Samuel 14 June 2016
This poem is really touching, good job. Sir please read my my poem your smile.thanks for sharing.
0 0 Reply
Valsa George 29 September 2015
Hearts are heavy Souls are weary Eyes are blurry This sad refrain touches the heart of everyone who reads this poem! What a tragic incident! Death coming in the form of flood and fire....! Double monsters appearing suddenly and taking the lives of innocents! So many close ones lost their lives! So Ghana weeps for her departed heroes and heroines! But from this crematorium, the country will re emerge like a phoenix bird..... this is what Ghana hopes! A touching write, Abossey!
1 0 Reply
Hemendra Singh Deopa 11 August 2015
Oh my god that was very tragic, even hard to imagine as it's sends chills down the spine man with numbness. God bless and may provides all people who suffered strength.
1 0 Reply
Amitava Sur 09 August 2015
What a heart wrenching incident, what makes me dumb. My heart goes for those helpless people who gathered there to save their lives where they did not know even that it was a grave yard, patiently waiting for them! ! It's a befitting tribute for those lost lives by remembering them through this poignant penning Thank you..
2 0 Reply
Chinedu Dike 01 August 2015
A sorrowful tale of tragedy, well articulated and subtly penned in poetic diction. It was a horrendous accident that caused national and international mourning. May the souls of the departed rest in peace. A good piece indeed.
2 0 Reply
Joseph Dela Sulh (losembe) 29 July 2015
Oh my gosh. Feel like crying flood of tears. I like your poem poet
2 0 Reply
Ayman Parray 17 July 2015
Dear Allotey, my prayers are with you and the people of Ghana and the poor souls who had to suffer this disaster. You have penned a heart breaking account of pain, suffering, trial and helplessness. God be with you all in this difficult time. I too share your belief that all will be well as Ghana Hopes and Ghana will rise again- Insha-Allah (with God's will) .
2 0 Reply
Allotey Abossey 17 July 2015
Amen.... God richly bless you Ayman... The Lord really is with us
0 0 Reply
Shreej K.c 16 July 2015
This is heart shearing, the way you portray it. And of course the hope something we Nepalese having faced the earthquake disaster can certainly relate to. Thank you for sharing.
2 0 Reply
Allotey Abossey 16 July 2015
Our condolences to Nepal.... God is still Lord
0 0 Reply
Charity Nduhiu 16 July 2015
Allotey, I also feel like mourning with you, i can feel that pain in my veins. I am truly so sorry for that loss of your country, may God console your hearts. A good write.
2 0 Reply
See All Comments