Rating: ★5.0
This flesh 'n' blood cousin of the ship 'o' the desert
here is given that funky punky, stylish haircut?
Could it be optical illusion or screen manipulation
causing him to grin in mock jubilation?
And ain't he gonna toss those bangs
like some real groovy llama?
My doesn't he look ready for any
showbiz dromedary drama?

Ah yes, he does look handsome, do come have a view
of this fuzzy, comedy dromedary beau!

Send in the paparazzi, for he's already saying cheese
But he prefers his own kind, send in some lady llamas please.

Hey, like humans, llamas can stick their tongues out
and spit to express displeasure
So keep your distance from angry ones
or you will regret the mismeasure.

The one in the picture is a cool llama teenager
but he's no teeny-bopper, for he's a teetotaller
as no one ever saw him with a bottle of gin or lager! 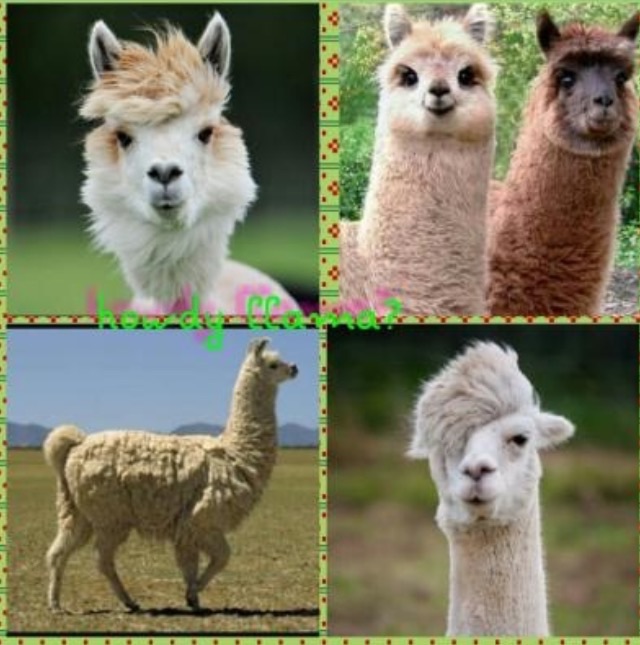 s.zaynab kamoonpuri
Topic(s) of this poem: animals
READ THIS POEM IN OTHER LANGUAGES

I would like to translate this poem
COMMENTS
Susan Williams 08 March 2020
hahahahahahahahahaha I love the gentle sense of humor unleashed herein! ! ! They have such an individual appearance running from comic to elegant and you give full respect to all!
0 0 Reply
Nkululeko Mdudu 18 January 2020
cool rhythm and rhyme piece
0 0 Reply
Aniruddha Pathak 30 October 2019
.... Because Google confused me more than clarify as to what exactly make one an Arabian sonnet.
0 0 Reply
Aniruddha Pathak 30 October 2019
Something drew me to this beautiful piece, and I saw that the poem is called Arabian sonnet. Can you give some more info on this poetry type. Thanks
0 0 Reply
Aniruddha Pathak 30 October 2019
Something drew me here again to this beautiful piece, and I saw, the poem is called Arabian sonnet. Can you also educate me with some more details. Thanks.
0 0 Reply
Rebecca Navarre 29 May 2019
Adorable, very creative, and brings giggles and smiles! .. Thank you so much for sharing! ..
0 0 Reply
Aniruddha Pathak 13 May 2019
Refreshingly funny and educative at the same time. A lovely piece.
0 0 Reply
Me Poet Yeps Poet 13 May 2019
Hey, like humans, llamas can stick their tongues out and spit to express displeasure So keep your distance from angry ones or you will regret the misS measure. DO THEY ALL MOSTLY BEHAVE LIKE THE WESTERNISH WOE OF A MAN
0 0 Reply
S.zaynab Kamoonpuri 13 May 2019
Cont/.. Since they are cousins I said dromedary for alliterative fun too yeah, it's an extant camel yeah so a cousin. And by mismeasure I meant if we miscalculated the distance we could be spat at by them lol.. Thanks!
0 0 Reply
S.zaynab Kamoonpuri 13 May 2019
Thanks so much Laurie, a picture of llamas inspired me, and thanks Bri, yeah many teens are teenyboppers so I'm glad that teenaged llamas or alpacas etc are not lol.. Glad to give a lil chuckle sometimes...
0 0 Reply
See All Comments