In similes...
Like the nine planets that orbit the sun...
Or like meteoroids that at times orbit the earth....
Like the moon that moves around the earth
And like several other moons that rotate and revolve around the planets
Like Triton that orbits Neptune...
Like the asteroids that go round the sun...
Like the Zodiac, the band of stars, that encircle the earth*****
Like the sun that spirals around the Galaxy
Like how the entire Milky way galaxy is spinning round and round....****: -*
Like the electrons orbiting in specific shells around the nucleus(of atoms) ...
Like in the spherical s orbital and p orbital around the atomic nucleus
Like an electron and positron said to be orbiting around their common centre of mass.
Like in fluid dynamics, a vortex, which is a region in a fluid in which the flow revolves around an axis line,

And for laymen, like moths.that are seen to encircle and fly around lights and lamps, ...

Like how the entire solar system orbits around the centre of the Milky Way
And last but not least how the earth itself makes a circuit round the sun....
So do we the Muslim believers in Hajj/Umrah pilgrimage
to Mecca in every eraand age
likewise go round and round and orbit the Ka'abah
the symbolic house of God
We feel at one with the earth
rotating on its axis.
Pilgrims experience a positive revolutionary change within themselves
as they revolve around the awesome sacrosanct cubic Kaaba
and rotate in their spherical orbits around it
akin to revolving, rotating planets and stars etc..


The change to be a better loftier person
To learn the sacredness of life and to respect all life
from the rite rule that you aren't allowed to kill even an ant when you are in your holiest garb and ritual of Hajj,
and this to extend to your normal world as well.

The sanctity of the sanctum sanctified
No blood can their be spilt.
The Kaabah in Mecca, a focal point to turn to, like a centripetal nucleus,
all Muslim world compasses pointing to it as a world of believers pray anywhere else as well
facing this obsidian cube in a unifiedway in that one direction
for unity in unison to the God of unity.

I'm sure if Hajj pilgrims attired as they are uniformly in pure white
if they were to be observed, photographed or videographed from above, or from a higher distance, even from space
they would look very much like a huge swirling circling mass of humanity in white
very much like how the pics of the spinning, spiraling milky way galaxy and other whirling galaxies appear!

So they go round the Kabah dressed in white
Like the sun and its solar system that are in a spiral of light.
Thus as the earth spins on its own axis
Muslims go round the Kaabah too in praxis
For as the earth goes about non-stop rotating
The pilgrims circuit the Kaabah
likewise circumambulating!


NB:
(I recently found an Article from Islamic ahlul bayt panjatan info site, more info data that corroborates and relates to my poetic observations made years ago:

When we revolve around the Kaaba we are orbiting in the same direction as the whole universe and all the creations of Allah from the tiniest particles, to the largest galaxies, along with the human race unite in praise of Allah.

The auspicious Hajj trip is one of the five pillars of Islam, a onetime obligation upon those who have the ability to perform it. Don't delay for Hajj! When we go around the Ka'aba, we are travelling in the land traveled by all the prophets of Allah, from the prophet Adam (alaihis salaam)to the Prophet Muhammad (SAW)

The Blood inside the human body begins its circulation "Anticlockwise"

The electrons of an atom revolve around its nucleus in the same manner as making Tawaf, in an anti-clockwise direction.

The moon revolves around the earth anti-clockwise.

The Sun along with its whole Solar system orbit in the galaxy in an anti-clockwise direction.

Truly Islam is from Allah)

Did u know that the Kaabah was green and once even white before? The Abbasid caliphs gave it d curent black covering. Personaly i wud hav lovd d kabah in green or white more.
I learnt that the interior Kiswah or cladding of the Kaaba is green after it has historically been red. May 28,2018

(Bohr amended that view of the motion of the planetary electrons to bring the model in line with the regular patterns (spectral series)of light emitted by real hydrogen atoms. By limiting the orbiting electrons to a series of circular orbits having discrete radii, Bohr could account for the series of discrete wavelengths in the emission spectrum of hydrogen. Light, he proposed, radiated from hydrogen atoms only when an electronmade a transition from an outer orbit to one closer to the nucleus. The energy lost by the electron in the abrupt transition is precisely the same as the energy of the quantumof emitted light.) 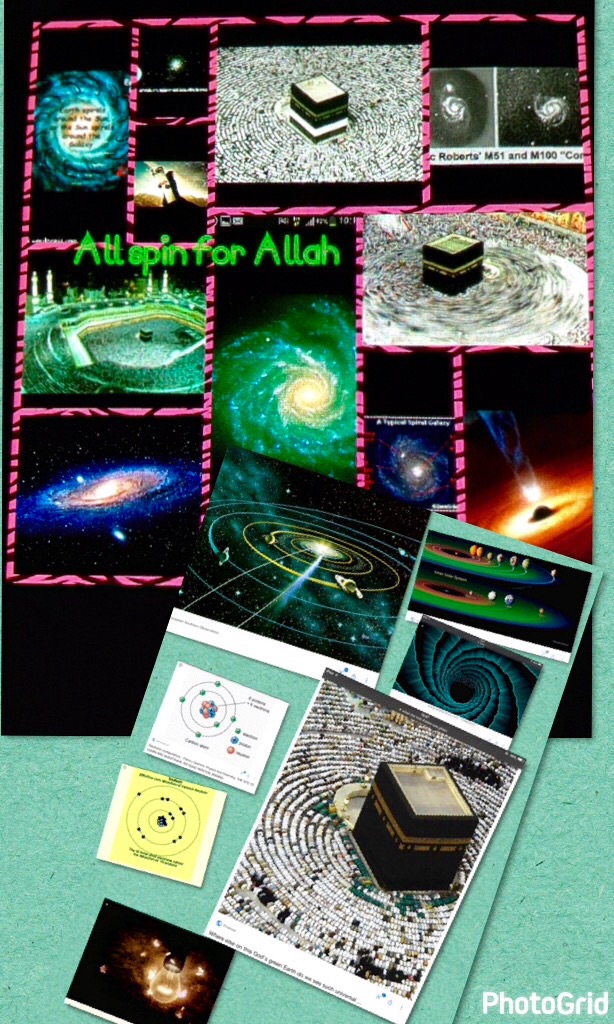 it was interesting to read this as i like learning about faith traditions—and learn some things i did—and the parents of kosovar friends have left here to make hajj. they are elderly, and i pray they'll be okay. (i have seen video footage of people in hajj—indeed a mass of humanity! —and have heard of injuries and even death at times because of the crowds. i hope they, as most, will find the experience inspiring, exceeding their expectations. -glen

Beautiful. Your love, emotions, information and urge to say all this to all of us. Thanks for sharing this lovely poem.

Very informative about why an anti-clockwise direction is taken for perambulation, and other related things

But you sound like a thinker no less, thanks for a great comment that made me smile too. Best wishes,

Your aesthetic metaphor on the Bohr atom led me to a moral reflection. In Bohr's atom, some states are allowed while others are forbidden. The beauty of discrete spectral emission (light & color) would not be possible without such quantization. Similarly, moral beauty in the human domain comes from self-realization of limits, bounds and forbidden states.

Wow thanks for your scientific evaluation comparison and conclusion in allegory. It's great to hear from a scientist on here!

Poetic observations on the manifestation of form, motion and spirit embodied in the Muslim pilgrimage and its verisimilitude with pure geometry (circle, cube) and the motion inherent in the universe from the infinite to the infinitesimal. The white circulating mass does not discriminate race, color, ethnicity or gender. With a common purpose humanity can transcend all divisions including religion. Difference remains but it is celebrated!

Wow thanks so much poet for a brill intellectual review and addition. May God bless you for your acknowledgement. Religion was meant for unity but we can celebrate the differences peacefully.