Khadi - the hand-made fabric of India,
A symbol of national dignity,
Gained recognition in the early 20th century!
It was a marathon Gandhian effort
That rejuvenated and resurrected
The Charkha or the spinning wheel!

Khadi - the hand spun, hand woven cloth
Bestowed a distinct identity
That made no distinction between
The upper class and the lower class!
Wearing a Khadi garment meant
Unity in diversity of the Indian people!

The birth of Khadi took place
In Sabarmati Ashram!
Initiated and pursued by Gandhiji
All the Ashram members resolved
To wear hand woven clothes of
Indian yarn only!

Though the decision was taken
To spin their own yarn,
A preparation was needed!
The first step was to get a spinning wheel
Then, to learn the art of weaving
From an experienced spinner


In 1917, when Gandhiji presided over the
Broach Educational Conference,
He met a remarkable lady named
Gangabehn Mazumdar!
This gracious lady promised to get hold of
A spinning wheel known in India as ‘Charkha'!

In a place named Vijapur in Baroda
They were successful in getting a Charkha!
Many had Charkhas in their homes,
But had abandoned them in their store rooms,
As there was no demand for hand woven cloth.
It had become wasted labour with no income!

When Gangabehn met these spinners,
They were eager to resume spinning.
If only they got a supply of slivers,
They could start spinning the Charkha!
Gandhiji managed and arranged for a supply
Of slivers from Umar Sobani's mill!

But this was not a long term solution.
They could not continuously demand
A supply of slivers from the same mill!
It was Gangabehn again, who solved the issue
She engaged a carder to prepare cotton, while
The youngsters got trained to make slivers!

Thus, the spinning wheel became
An integral part of the Sabarmati Ashram!
It spread its wings to other parts of India
As a major occupation, self reliant and self sufficient!
It represented freedom from colonialism, simultaneously
Providing a state of economic independence!


Khadi represented not just a cloth or a fabric
But a symbol of Swadeshi movement!
A movement of labour towards communal unity,
A unity of responsibility with national integrity
A unity of similarity in ideals and goals
A sublime symbol of freedom! 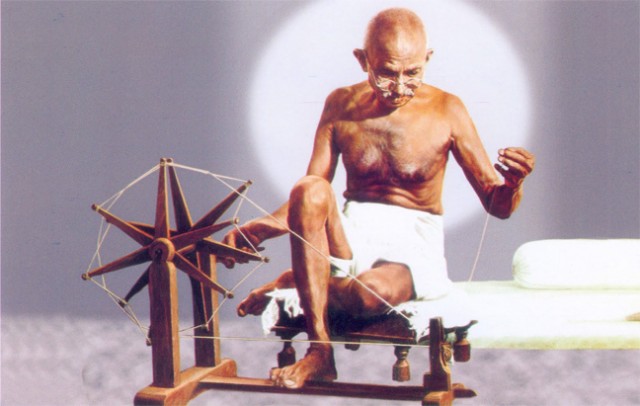 Topic(s) of this poem: personality