Colonialism in its last moments is pushed to the centre stage -
the recoiling phenomenon intensely illuminated
by The Flame Of Liberty.
Roused by the prospect of emancipatory freedom,
from the shadows of Servitude, nations rise.
Their demand for a dawn long on hold
brings an end to the colonial yoke.

Her soul refreshed with a breath of new life,
Africa thrills at the sight of the expanding horizons -
an euphoria feelings that veiled 'Danger Signs'.
She's been bequeathed dreadful webs of intrigue:
Uneasy amalgams of multicultural colonial territories,
hitherto upheld through coercive mechanisms.

With price tags of 'patriots' hanging on won Liberty,
they bicker over the vacated Seat Of Power.
In their snobbery of honour in favour of greed,
strategic realignments of comrades produce
The Strongman: A tyrant - backed by 'jackals'
and supported by gullible public.

In a cruel twist of fate, hopeful assertion of self-rule
soon becomes the anticipation of a gaudy illusion.
The exit of Foreign Powers has delivered the people
into the grasps of Democratic Mobs:
Cabals fueled by putrid sludge of Kleptocracy,
devoid of political visions to transform into realities.

With no intent of restructuring imposed alien models,
cabals pursue joint criminal enterprises:
Good citizens are sieved out of the system,
party loyalists take over their place.
Key positions go to ruthless operators,
who translate decisions into actions.

Vast network of political jobbers across tribes
are bought;
Political parties become private estates;
Police remains agent of The State;
Legislative bodies are subdued;
With the Judiciary effectively hijacked,
the oppressed has no where to seek redress.
Ultimately The Liberators Turn Into Oppressors.

Haven subverted Power Of The People
which has raised them to unfair dominion;
In frenzied torrents of greed without care,
Opportunistic Banditry is institutionalized.
In a matter of months raging economic crises follow.
And attempts to curb budget deficits upset lives,
sending an already violated citizenry
on a sad voyage into poverty.

In their scheme for hegemony,  struggle credentials with
membership of the ruling party, are made the
prerequisites for political and economic ascendancy.
Their capitalist tendency reinvents imperialism.
With nepotism and sectionalism proclivity,  parochial
appointments skewed towards specific groups are made.

Ethnic rivalry is promoted as one tribe is favoured above others.
Serious conflicts are provoked with diverse interest groups.
The Freedom Party once the pride of the nation
has turned public enemy number one.
With the powder keg too close to the naked flames,
BANG!  It explodes. And the fire burns with a vengeance.

Turmoils of Democratic Anarchy usher in The Military:
Demagogues with perfect sets of iron teeth -
Whose stern miens wore the semblance of an undertaker.
They bait on sentiments of the masses to legitimize regime;
They promise to steer The Ship Of State
to berth on a safe harbour;
They pay lip service to their anti-corruption crusade.
They're the raiders of public treasuries!
They're the violators of Integrity Of The State!
They're the embodiments of rot!

Strategic alliance is built with oligarchs of crafty pretense.
The marriage of convenience symbiotic in its nature:
'You Rub My Back I'll Rub Yours.'
The wooed spiders, with a keen knowledge of the web
assume an oversight for the junta - reinforcing its hold
on power. Their administrative tasks keep the wheels
of government-owned enterprises turning,
thereby maintaining brazen squandering of resources.

In the quest for total control,
with the delusions that match their effronteries;
They unleash an assemblage of horrors:
Prison cells are packed with innocent citizens
picked on the flimsiest of excuses;
Rendition of dissidents tagged 'terrorists' becomes normal.
Curfews are enforced;  Checkpoints are mounted;
Visible policing is achieved;  With free speech punished,
displeasures are carefully altered in whispers;  And
brutality is sold as pragmatic response to increased crime.

The cowardly populace petrified in its sullen expression,
in degrading submission blindly accepts Slavery.
Assets of nations are then plundered with impunity;
Ill-gotten moneys are laundered to different offshore heavens;
Treacherously,  patrimonies are secretly being transferred
abroad, and governments turn around to ask for loans
on the very funds illicitly moved.

Post-colonial Africa is a continent marred with endemic conflicts;
Human Rights abuses of monumental proportions;
The entrenched lack of accountability within governments;
Shameful history of nationalized thefts by those in high places;
Quests for power at all costs - with Heads of States
holding on to power even when circumstances dictate otherwise.

Since Independence Africa has continued to stagnate
while the rest of the world have forged ahead.
But she ought to be thriving well!

She has an unrivaled wild life conducive to tourism;
Pristine ecosystem with endless stretches of fertile lands;
Rare incidences of natural disasters;
Resilient hardworking population;
Her prospects for hydroelectric supply is second to none.

She is hugely blessed with diverse mineral resources.
No other continent is endowed with as much!
Yet notoriously, Africa with such fortunes and potentials
relentlessly wallows in the throes of economic woes. 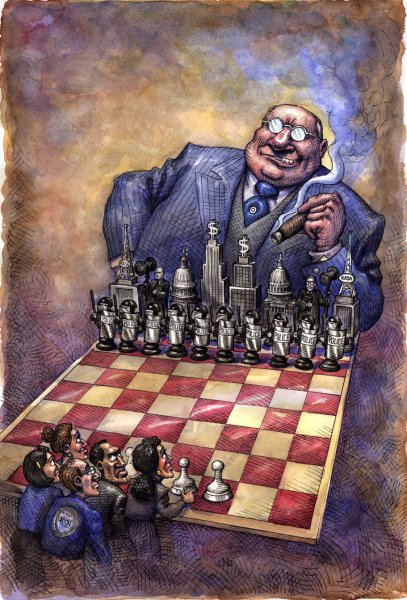 She is blessed with uranium, iron ore, crude oil, and natural gas/She has diamond, gold, silver, chromium, zinc, copper, tin, platinum and what not! Still it's slumbering Africa! An insightful write reflecting the psyche of modest Africa! Brilliantly penned.....10

Hi Magadha, thanks for your insightful appraisal of the piece. Remain enriched.

What a powerful & clever cartoon picture!

Thanks Laurie. May your future be greater than your past and present would let you dream of. Remain blessed.

Thanks Chinedu! Speaking of chess, have you seen the movie Queen of Katwe? It's a true story about a Ugandan girl who becomes a chess champion. I highly recommend it,

Congratulations on POD. Well deserved. A while coming.

An insightful write that reveals the psyche of slumbering Africa! I totally agree with the comment of poetess Magadha! Great poem Chinedu...stay blessed! !

Dear Chinedu, i have yet to see a pen so powerful like yours. Kudos...100