A Tribute To My Dog Poem by Valsa George

A Tribute To My Dog


Here lies my dog, motionless in his kennel
unable to wag his tail as he always did.
Yesterday when I saw him, curling helpless on his mat
he still wagged his tail and from him arose
a faint tremolo of love
punctuated by gutturals of pain.
At some bleak hour of the night,
the last ember of life died down
and his supple body turned stiff and stark.

Now he lies straight and majestic in death
leaving a track record of love
far difficult to break,
- a love no vessel can hold
or equated with what we humans feel.

Speechless as I stand, memories churn within.
He came to us - too young to be weaned,
a glossy black puppy with tawny gleaming eyes.
His short, sturdy limbs, large drooping ears,
slender waist and elongated frame
well proclaimed his pedigree aloud
So full of mischief, he capered and hopped,
like a new born calf, always up on his heels.
Sniffing with moist nose, he dug and dug
as if unearthing a treasure trove
buried deep beneath the soil.
With alert vigil, he guarded our home,
barking at strangers and driving rodents away
He expected nothing in turn but love.
His loyalty as we deem was never servile.
Never was he on chains to be hauled like cattle.
He enjoyed sauntering through the courtyard
giving company as we took our evening rounds.
He gloated rubbing his body over our knee
and sat content as our stroking fingers ran all around
Licking our feet and arms,
what he conveyed in inarticulate words
could be deciphered thus -
‘I love you, love you true'

Like the bouncing ball, he often played with
our hearts made to bounce up in love
and our hands fold in benison
for a comrade who departs,
valiant in life and loyal to the core
hoping to meet him anon
on the far green meadows of bliss,
still wagging his tail, avowing a bond
too strong to be snapped or splintered. 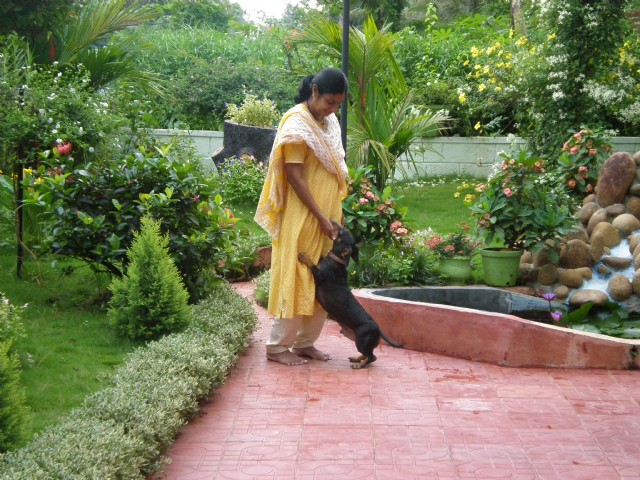 Valsa George
Sunday, May 13, 2012
Topic(s) of this poem: pet
poem poems loyalty chains
Download image of this poem.
Report this poem
Poems By Valsa George
An Agonizing Cry
Winged Words
A Sudden Downpour
Eagle On Wings
To My Anonymous Lover
See All Poems by Valsa George
COMMENTS OF THE POEM
Anthony Cabal 14 October 2012

this brought tears to my eyes. greetings from one dog lover to another.

Loved the love of your doggies life what wonderful love they emit to us sadly their life is short....my 11 yr old poodle is blind but he sees with his nose, thanks for the tribute...regards

I just chanced to go through this spirited poem of yours and was in tears.I can identify myself with you in your grief as I have also undergone a similar situation when our pet Puppy-that was his name-left us.Thanks for the poignant poem.

A wonderful poem for a wonderful pet whose life you will never ever forget.......written with love Valsa

Thank you Tom. Glad you read it!

hey, valsa! i was looking for another poem when the title of this one caught my attention. these lines make vivid the picture of your dog and his suffering from him arose a faint tremolo of love punctuated by gutturals of pain though i prefer dogs, we've nearly always had cats in our homes- my wife's preference. (i grew up in apartments in new york city where the only pets allowed were birds in cages.) i confess i often find cats annoying. but whenever they've been sick or hurting i couldn't prevent my heart going out to them. at which point i'd be nurturing to them until they became, again, healthy and annoying. btw, the yard in the picture is lush and inviting. glen

I never used to like dogs, but loved cats. But as soon as we started keeping them, I began liking them. ‘Tippu’ was such a sweet dog, very intelligent and so affectionate that soon he was like a member of the family. At age six, suddenly he fell ill and died, plunging all of us into deep gloom. Still his memory is so fresh in us! Thank you Glen for the sweet comment! Yes, I have a small beautiful garden and we have a compound full of greenery!

I have read this poem many a time and was overwhelmed by the emotional bond that you, as a keeper, had with your dog. This biography of a dog, who loved and was loved as a member of the household, pales the biographies of Kings and Emperors, Knights and Noblemen for they were written for the sake of material gains rather than for the sake of love begotten. Thanks a lot for a superb poem along with the image, Valsa ji.

What a beautiful description of a love for a pet. Another piece of beauty from Valsa who has complete control on writing on such beutiful poems on touching topics...............10