Rating: ★4.5
Come over here, son.
There are things that have to be done,
For my time is near,
And I have to make clear,
Instructions that must be followed to the letter.

My voice is weak and strained.
May God give me the strength to articulate
The dire straits of family and farm.
So, please heed my warnings, dear son.
Kneel and listen to what I have to say.

Over by the hearth,
Under a flagstone that is dark,
Lies a talisman that is filled
With bent nails, a lock ofhair and urine secured;
‘Tis a witch bottle to ward off evil spells.

You laugh, but evil does exist and so does the witch,
And you'll have to deal with her after I'm dead.
Decades ago, she showed up on this farm
Told me to vacate, or she would do me harm.
This land belonged to her and no other.

I defied this old crone
And she promised what was forewarned.
I nearly caught my death,
And the farm fell into neglect,
Until I procured that bottle for protection.

It was a matter of days
When the old crone came
Knocking on my door, pleading and wailing for mercy,
For the spell boomeranged with spectacular cruelty.
Pitiful was this witch, who begged for forgiveness.

I gave her none and told her to be gone,
That a talisman protects this farm
From now until the day I depart.
This land belongs to me and mine for generations to come.
So, may your ill-cast spell remind you of who's the boss.

Listen … as then, as I do now,
I can feel her prowl the vicinity of this farm.
She knows my death is at hand,
So you must refill the talisman
With your urine and hair to keep our legacy intact.

Do as I say and don't delay.
For the old crone is outside waiting.
I can feel her approach; she'll soon be at the door
My chest is heavy from panic - nay, horror!
She's listening for my last gasp and then she'll…. 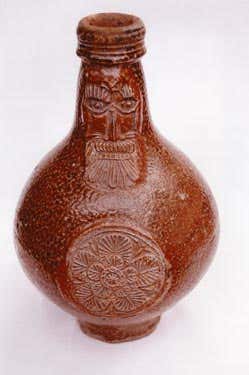 Thomas Coston
Sunday, February 2, 2020
Download image of this poem.
Report this poem
Topic(s) of this poem: evil,folklore,witches
READ THIS POEM IN OTHER LANGUAGES

I would like to translate this poem
COMMENTS
Shaun Cronick 06 October 2020
Great and highly original stand alone poems deserved to be reread from time to time. This is one of those few. Thanks again Thomas. Five stars and worthy of each and take care.
0 0 Reply
Captain Cur 29 February 2020
Loved the poem and story Tom and the.... ending. Gotta get me a few of those bottles, lots of witches living near me in Bedlam.
2 0 Reply
Anil Kumar Panda 08 February 2020
Excellent poetry. The flow, the rhyming, the story all make an interesting reading. Like to read again again.Thanks for sharing such a beautiful poem.10+++
2 0 Reply
Thomas Coston 08 February 2020
Thanks Anil for your kind comments.
0 0 Reply
Shaun Cronick 02 February 2020
Brilliant! Thomas a sheer dark delight from beginning to end.Love it! And the last stanza is literally to die for. So original and well written and informative (I've never heard of a witch bottle) . Thank you Thomas for this dark gem and deserves more than a 10 and added to my great poems chest.
2 0 Reply
Thomas Coston 02 February 2020
Thanks, Shaun. I never heard of one either until a story came over my news feed about one found in Virginia. They suspect it was left by a Union soldier to ward off curses by the Confederates whose homes they occupied. I also read they've found witch bottles in the U.K.
0 0 Reply
Shaun Cronick 02 February 2020
Thanks for the heads up Thomas I'll have to look into that. And this poem is a delight and apologies for not spotting sooner your Death Eatin' A Cracker which like this poem, again superb! Thank you again my friend and take care.
0 0 Reply
See All Comments