The Day I Met Mirza Ghalib Poem by Rajnish Manga

The Day I Met Mirza Ghalib


The Mazar of Mirza
Asadullah khan ‘Ghalib'
Was way up from Dargah
of Hazrat Nizamuddin Auliya.
I reached the courtyard where
The Mazar of Mirza Ghalib stands
Having four small walls and a roof
Surrounded by several other graves
I bowed my head at the resting place
Of one of the greatest poets of all times
Primarily because I grew up reading his Ghazals

(Followed by reading his talking letters)

Listening to renowned singers reciting his poems
And people quoting from his verses off and on
To lend weight to their unripe arguments
And to add beauty to their conversation
I stayed there for quite some time
And offered a few words of prayer
And returned with a heavy heart
But with a sense of fulfillment
As my dream had come true
I had met the man who was
Behind ‘Dewan-e-Ghalib'
I couldn't have got rest
Without this Ziyarat. 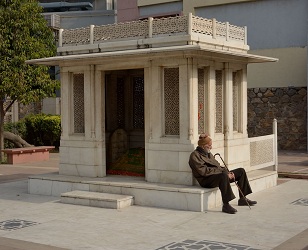 Rajnish Manga
Thursday, October 13, 2016
Topic(s) of this poem: poems,poet,urdu,memorial
poem poems
Download image of this poem.
Report this poem
POET'S NOTES ABOUT THE POEM
The Mazar of Mirza Asadullah Khan Ghalib is located in Nizamuddin (West) area of South Delhi. It is very close to the Dargah of Great Sufi Saint Hazrat Nizamuddin Aulia and also not very far from Humanyun's Tomb and the Tomb of Abd-ur-Rahim Khan-e-khana (Akbar's nauratna) .
COMMENTS OF THE POEM
Kumarmani Mahakul 19 October 2016

Listening and reciting his poems are interesting. This is very nice tribute is given really. Amazingly drafted and interestingly shared this is.10

Like countless other people, I have also been a great admirer of Mirza Ghalib. Thank you for supporting my views, Sir.

excellent inpiring, superb. thanks a lot.rajnish for sharing

I feel honoured by your visit and kind words of appreciation for the poem. Thanks, Madhabi ji.

That was obviously a most inspiring day for you- unforgettable. A skilfully shaped poem as it looks on the page.

Mirza Ghalib is perhaps the best Urdu language poet who was active until about 160 years ago. He had a great influence on the literary scene in the sub-continent that emerged after his death. Thanks a lot, Micheal.

Remembrance. Thanks for sharing this poem with us.

Mirza Ghalib poured life's philosophy in his poems to deliver to one and all. I always enjoyed and appreciated some of his original poems and some translations. Poem builds the bridge from now to his time.

So nice of you to have shared your views about the legendary poet and this poem. Thanks a lot.