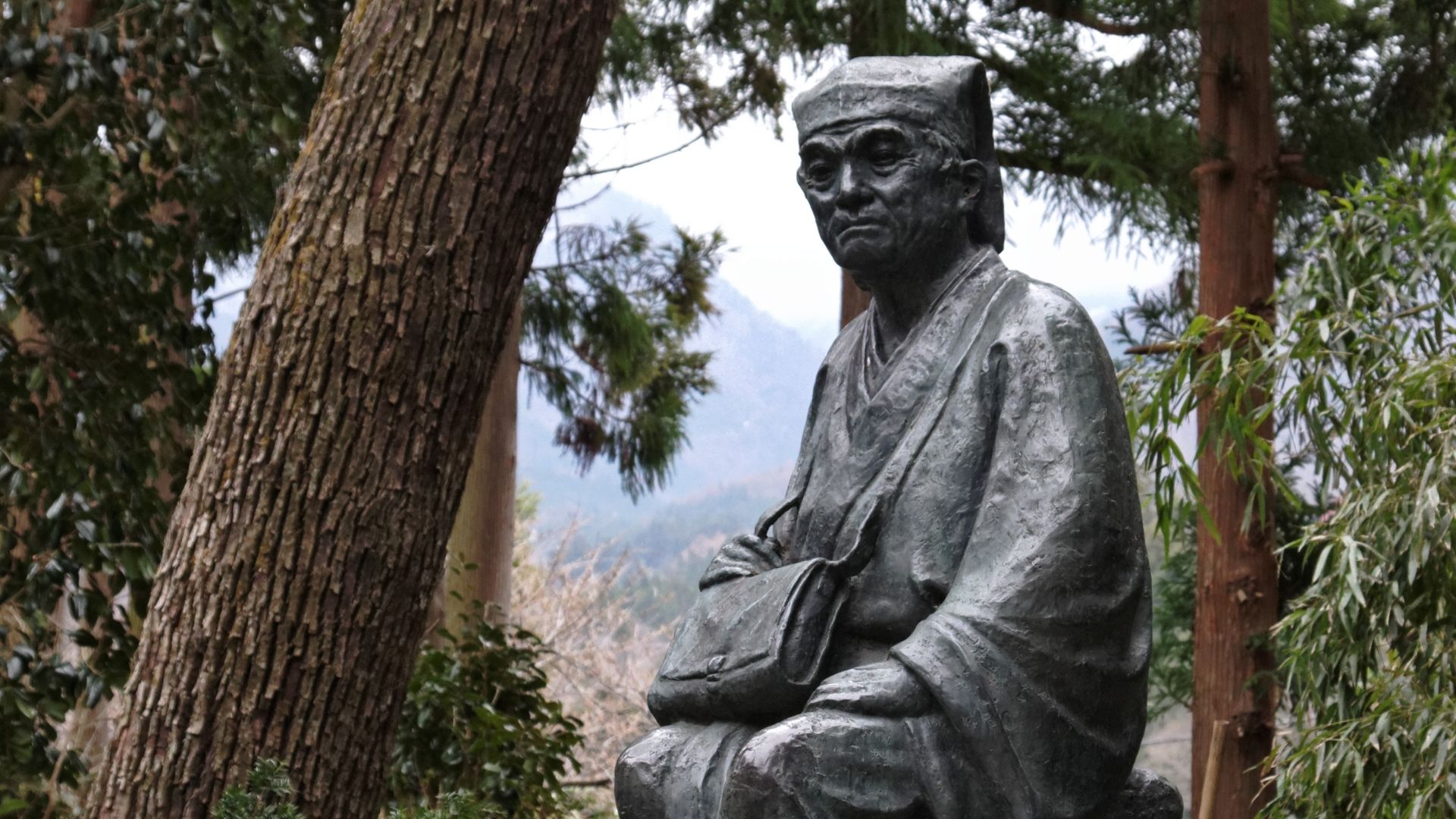 Following are several translations
of the 'Old Pond' poem, which may be
the most famous of all haiku:
...

A snowy morning--
by myself,
chewing on dried salmon.
...

Autumn moonlight--
a worm digs silently
into the chestnut.
...

Read Poem
5.
A Field Of Cotton

A monk sips morning tea,
it's quiet,
the chrysanthemum's flowering.
...

A caterpillar,
this deep in fall-
still not a butterfly.
...

Waking in the night;
the lamp is low,
the oil freezing.
...

Sick on my journey,
only my dreams will wander
these desolate moors
...

Awake at night--
the sound of the water jar
cracking in the cold.
...

A cicada shell;
it sang itself
utterly away.
...

A cool fall night--
getting dinner, we peeled
...

Winter solitude--
in a world of one color
the sound of wind.
...

First day of spring--
I keep thinking about
the end of autumn.
...

Spring:
A hill without a name
Veiled in morning mist.
...

A weathered skeleton
in windy fields of memory,
piercing like a knife
...

Bashō was born Matsuo Kinsaku around 1644, somewhere near Ueno in Iga Province. His father may have been a low-ranking samurai, which would have promised Bashō a career in the military but not much chance of a notable life. It was traditionally claimed by biographers that he worked in the kitchens. However, as a child Bashō became a servant to Tōdō Yoshitada, who shared with Bashō a love for haikai no renga, a form of cooperative poetry composition. The sequences were opened with a verse in the 5-7-5 mora format; this verse was named a hokku, and would later be renamed haiku when presented as stand-alone works. The hokku would be followed by a related 7-7 addition by another poet. Both Bashō and Yoshitada gave themselves haigō, or haikai pen names; Bashō's was Sōbō, which was simply the on'yomi reading of his samurai name of Matsuo Munefusa. In 1662 the first extant poem by Bashō was published; in 1664 two of his hokku were printed in a compilation, and in 1665 Bashō and Yoshitada composed a one-hundred-verse renku with some acquaintances. Yoshitada's sudden death in 1666 brought Bashō's peaceful life as a servant to an end. No records of this time remain, but it is believed that Bashō gave up the possibility of samurai status and left home. Biographers have proposed various reasons and destinations, including the possibility of an affair between Bashō and a Shinto miko named Jutei, which is unlikely to be true. Bashō's own references to this time are vague; he recalled that "at one time I coveted an official post with a tenure of land", and that "there was a time when I was fascinated with the ways of homosexual love", but there is no indication whether he was referring to real obsessions or even fictional ones. He was uncertain whether to become a full-time poet; by his own account, "the alternatives battled in my mind and made my life restless". His indecision may have been influenced by the then still relatively low status of renga and haikai no renga as more social activities than serious artistic endeavors. In any case, his poems continued to be published in anthologies in 1667, 1669, and 1671, and he published his own compilation of work by him and other authors of the Teitoku school, Seashell Game, in 1672. In about the spring of that year he moved to Edo, to further his study of poetry. On his return to Edo in the winter of 1691, Bashō lived in his third bashō hut, again provided by his disciples. This time, he was not alone; he took in a nephew and his female friend, Jutei, who were both recovering from illness. He had a great many visitors. Bashō's grave in Ōtsu, Shiga Prefecture Bashō continued to be uneasy. He wrote to a friend that "disturbed by others, I have no peace of mind". He made a living from teaching and appearances at haikai parties until late August of 1693, when he shut the gate to his bashō hut and refused to see anybody for a month. Finally, he relented after adopting the principle of karumi or "lightness", a semi-Buddhist philosophy of greeting the mundane world rather than separating himself from it. Bashō left Edo for the last time in the summer of 1694, spending time in Ueno and Kyoto before his arrival in Osaka. He became sick with a stomach illness and died peacefully, surrounded by his disciples. Although he did not compose any formal death poem on his deathbed the following, being the last poem recorded during his final illness, is generally accepted as his poem of farewell: tabi ni yande / yume wa kareno wo / kake meguru falling sick on a journey / my dream goes wandering / over a field of dried grass)

The Best Poem Of Matsuo Basho

Following are several translations
of the 'Old Pond' poem, which may be
the most famous of all haiku:

The old pond-
a frog jumps in,
sound of water.

An old silent pond...
A frog jumps into the pond,
splash! Silence again.

There is the old pond!
Lo, into it jumps a frog:
hark, water's music!

The silent old pond
a mirror of ancient calm,
a frog-leaps-in splash.

The old pond,
A frog jumps in:.
Plop!

The old pond, yes, and
A frog is jumping into
The water, and splash.

I never quite understood haiku until I started reading the works of Basho - now I am studying haiku - and it is quite enlightening - something very different than the poetry that I have often been accustomed to.

How much can be said in so little words.I'm glad I finally discovered who wrote and invented the haiku.Thank you.I wrote some haiku based on THE OLD POND haiku-which is this poet's most famous.

No Experience Needed, No Boss Over il Your FD Shoulder… Say Goodbye To Your Old Job! Limited Number Of Spots Open it ……. fuljobz.com

He is very cool man