Click For The Best Poems ❱❱
Next Poem
78 / 762
Previous Poem

What happens when two great minds meet?
An explosion of brilliant ideas,
An exchange of thoughts,
A marvellous conversation,
Of science, art, philosophy,
Of pen, paper, poetry and literature,
Everything stands bright, shining and beaming,
With the radiance of two magnificent personalities!

On 14th July,1930, Dr Albert Einstein,
Welcomed into his summer home, near Berlin,
Nobel Laureate Rabindranath Tagore!
For those who were present then,
It has been hailed and praised as a meeting
Of intellectual brilliance and spiritual exuberance!
They conversed together on various lofty topics,
With mutual respect and admiration for each other.

‘Gurudev' Rabindranath Tagore arrived
Like a learned sage, accompanied by
An entourage of admirers,
Dressed in a silken robe,
With flowing white hair and beard,
A shawl wound round him in style.
A majestic personality,
With a mystical aura enveloping him!

At the invitation of a friend named Bruno Mendel,
Once again, Tagore and Einstein met each other.
Dmitri Marianoff - Dr. Einstein's step -son-in- law,
Who took down notes, when they conversed, remarked:
Tagore as 'The poet with the head of a thinker and
Einstein as ' The thinker with the head of a poet.'
The deep and insightful 'Tagore- Einstein' dialogue turned
Into a celebration of divine music and charming philosophy! 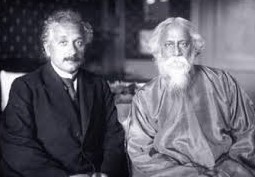 It was truly 'a meeting Of intellectual brilliance and spiritual exuberance! ' Nice portrayal of the synergy developed between these two stalwarts if their time.

Yet another gem! Loved reading about the great personalities. Fabulous ??

So well captured the minute details of the meeting between the two great minds of their time. I admire your skills.5****

Meeting of two great personalitirs in two different firkds one a, scientist another a poet

A beautiful pen picture of the two eminent personalities of the world.... well done... 5* from me. PC

Scientist with poet's heart and Poet with wonder thoughts are best friends to meet and reveal best of ideas to the world!

All stalwarts of high mind and thoughts are impossible even to see now!