Click For The Best Poems ❱❱
Next Poem
22 / 63
Previous Poem

Tearing their way towards the boat,
surfacing in parallel,
plunging as in invisible harness,
alongside, round, under the bowsprit,
glittering on top, fading at sides,
streamlined and gleaming,
abstractions of speed, energy, power,
leaping out, plunging water into
spiralling and vanishing,
swift shadows alike,
sailing into the air in another great loop,
them after drawing the sea,
shaking it off in mid-air,
plunging forwards again,
tearing frothing bow-waves with their beaks,
diving down, falling behind, criss-crossing,
flung themselves out up in insane abandon
in mid-air shaking, muscular the convulsion,
as though resolved to abandon sea for ever.
But gravity alas,
dragged them forward and down again
into their bubbling liquid world.
Noise of rending and searing.
Each leap into the air called forth a chorus of gasps
each plunge a sigh.
Laugh on the comment at sigh last:

In the thousands of years to come
humans will not them allow
lead evolution's claimed harness up.
No fear therefore to become our dauphins.*
...................................
Transformed into poem a description
of Patrick Leigh Fermor, to be found in
paddy's-world-transcript-of John Julius Norwich
*verse invented thanks to comment of Barry Middleton 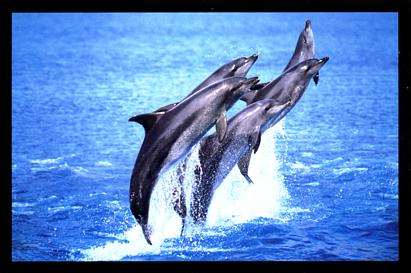 dimitrios galanis
Wednesday, January 20, 2016
Topic(s) of this poem: evolution,grace,nature,sea
poem poems
Download image of this poem.
Report this poem
POET'S NOTES ABOUT THE POEM
Transformed into poem a description
of Patrick Leigh Fermor, to be found in
paddy's-world-transcript-of John Julius Norwich
READ THIS POEM IN OTHER LANGUAGES

Living in Florida I really like dolphins. And perhaps they will become the new dauphins.

You caught it, dear Barry.I did know the word 'dauphins'' So nice.I may use it instead mine expression[corresponding].Thank you so much.

I did NOT know the word dauphins.....

I haven't read P. L. Fermor's novel, but your well-crafted poem made a great impression on me. It's lively, vibrant and vividly described.

This is a display of biophilia on their part, an overture of friendship across species boundaries. They are sharing their capacity for excitement and joy, as if to say, " We know happiness, and we believe you know it too." I love this poem's sculpting of nature's motifs.

I invite you to read my poem: LET US ADMIRE THE LONELY DOLPHIN.

A beautiful poem on nature and evolution is well executed. Thanks and congratulations for being selected this poem as the member poem of the poem of the day.

A well composed wonderful poem of the day. Congrats on your featured piece....10++

In the thousands of years to come humans will not them allow lead evolution's claimed harness up. No fear therefore to become our dauphins./// beautiful let them let them spend their playful life independently keep their residing palace safe from our human corruption!