War Of The Owen Sisters Poem by Chandini Jaswal

War Of The Owen Sisters


Let me tell you a story,
Well, neither does it describe a hero's glory,
Nor does it exemplify how the lions roared,
As to new heights the hero soared.

Well this is the story of the Owen's daughters,
And their doings will send you to fits of laughter,
One fine day the Owens were blessed,
And Mr. Owens stressed,
'Thank you god, for such a lovely gift,
Bless my daughters, that to bad path should they never drift.'
Poor Mr. Owens had modelled his daughters as ladies, who are beautiful and coy,
But God had his own plans for the Owen's bliss and joy!

One was named Tessie,
The other was named Michelle.
And oh what the dickens,
They fought like chickens;
Each said she was daddy's girl,
His treasured pearl.
Michelle was mighty and proud,
Tessie loved the attention of the crowd.

Then came the time for the girls to wed,
But that occasion turned out to be the moments the Owens dread,
And what a mess,
Did the girls made, you couldn't guess,
As the girls came out fighting for the same wedding gown,
In a short white bath dress!
The dames frowned,
The Owens stood ashamed,
The girls sat on a side,
Each thinking she was right,
And said, 'this is not my mistake, she is to be blamed.'
The wedding was rushed,
And the guests to each other hushed,
'Holy Mary! In their materialistic race,
These girls have forgotten all elegance and grace.'
Mr. Owens inside wailed,
Because he realized that as a father, he had miserably failed.

He gave both his girls an advice,
Words which were truly wise.
'My dears, at the hands of destiny,
One can conquer only one victory,
That is love and trust,
Try as hard as you must,
And be honest to this marriage.'
With this he bid goodbye,
To his daughters in the carriage.
Each bride tear eyed.

But alas, the words could not create a very deep impact,
As there was hardly a change in the girls' tact,
For now, they were mothers
There fight had reached one step further,
Forgetting what all they were taught,
They bitterly fought,
On the fact, who had a prettier child,
And which sister had a better sense of child dressing style! 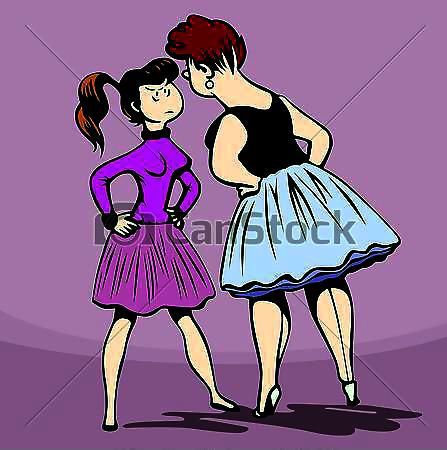 Wow- - sibling rivalry never ends.They are psychologically tuned to quarrel.Siblings quarrel to get more attention and more love from parents.In a family where there are more children, they fight among themselves and also through it learn sharing, adjustment and many social behaviors A nice poem.You brought out this human character through this beautiful poem.

Chandini, That is nice. You are an excellent story teller. Very simple story, but kept me rooted till the end. The characters portrayed and sketched very vividly, by just a few strokes here and there. It is more like a caricature. Loved reading. 10+

This reads more like a short story than a poem, but a good read anyway. Thanks for sharing. Annette.

That was the idea Annette, I wanted to write something new, so I came up with this composition. Thank you for the compliment, anyways!

Thank you so much! Glad to hear that you liked my poem!

I would like to translate this poem
Poems By Chandini Jaswal
The Furious Teacher And The New Class
This Is My India And I Am Proud Of Her
What Is Wrong With Today's Lass And Lad?
Get Up And Rise
Love Is All That You Seek
See All Poems by Chandini Jaswal
Next Poem
18 / 16
Previous Poem