The exodus of the migrant workers
is so painful to see,
they had arrived in our towns and cities
to fulfill their daily needs of livelihood;
they worked as masons and helpers
as bricklayers and as stone-cutters
as sweepers and gardeners,
as houseboys and as housemaids,
as taxi drivers and as barbers
as vegetable vendors and grocers
as cooks and as tailors, etc.

They had come to the cities to earn their wages
just enough to feed themselves two square meals a day;
These migrant workers are the builders of our nation,
they worked tirelessly from dawn dusk
at constructions sites,
building roads, bridges and apartments;
even doing the most strenuous works
while overlooking their own fatigue;
their poor nutrition could never substitute or revive
the energy they lost doing hard labor and work.

Yet in the midst of the pandemic
they ran, they walked for miles;
some even lost their lives
due to fatigue, due to accidents
as they were filled with panic and anxiety
to get back home to the safety of their native surroundings.

Migrant workers, old and young
with their little children and their families
kept rushing out, covering miles even by foot or by cycles
to reach their villages and be safe from the virus
when the virus itself was looming all around them
everywhere, in all the cities
infecting people without any notice, without any mercy
but the exodus of migrant workers continued
as they had no knowledge nor education
of how dangerous the corona virus could be.

But the fear of the pandemic and the fear of death
made them run and still makes them run
as they have witnessed and heard
that corona virus is a deadly infection;
and as many of their friends have succumbed to death
while they kept walking homewards on the railway tracks
and lost their lives to exhaustion and carelessness,
nothing could stop their initiative to get back home
though they even knew that the trucks
that gave their friends a lift made them sick
as one of them who was infected with the virus
also kept traveling along without knowing he could pass
the deadly infection to the others sitting next to him.

And as they keep covering those many miles to get home,
the exodus of the migrant workers keeps increasing day by day;
the pathetic sight of them having no food nor a place to sleep
makes the eyes of humanity to weep
as they keep struggling to reach their homes.

And though poor and helpless they may be
since they own no cars to take them home,
and though the corona virus has no eyes to see
nor ears to hear who is dying or hiding in quarantine
or who is running and who is under Lock-down,
the exodus of the migrant workers continues with a hope
and a prayer that they reach their homes safe and alive
as human instinct tells life never to give up. 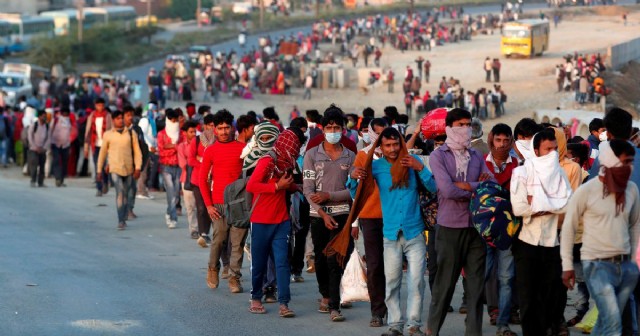 Yes indeed mass exodus is really painful. A pious matter to be attended. So well painted every details.

A deeply touching write that vividly describes the untold sufferings of migrant workers who became shelterless in their own land due to Covid-19 shutdowns.

A well composed poem of the day. Simply impressive. Congrats on your featured piece....10+++

A see a heart full of sympathy, of motherly love when I read through the poem. Congratulations and full score. Onto myfav

A touching account of the true story. How the Government and the society ignored the migrant workers, . And left them to their fate. Totally irresponsible act.

Yet in the midst of the pandemic they ran, they walked for miles; some even lost their lives due to fatigue, due to accidents as they were filled with panic and anxiety to get back home to the safety of their native surroundings. You really feel with the migrants....... love this. you have heart full of sympathy. tony

We are all imigrantes on earth! ! Movements, From one place to another. Exodus. Thanks for sharing this poem with us.