George Floyd - Will Want To Be Remembered As A Hero

He was not just a man on that street awaiting to die
he was also a father and a son for real and for love
he was also a friend and a citizen of that nation where he died,
now he is a soul yet an idol of inspiration and a voice of the people.

Everyone who walks on those streets everywhere calls out his name,
they ask justice for him though he is no more
and gone so far away from his home,
they ask for justice for what he suffered as he left,
they ask safety and protection for their own selves.

People want no more of racism in their tomorrows of existence.
that is the truth they seek in their days and years ahead
and it will take many thoughts and reflections to seek out
a direction of reform and compassion.

The weeping and sorrowing has to now find its nest of calmness,
only if you sit silently and recline on your resilience
it will help you to cross the bridges of anger and intolerance
as it is deemed necessary at this moment to preserve your own nation.

So just ponder for a while and ask yourselves -
what if in this world we don't forgive one another?
What if the mourning and hatred continues like a ceaseless fireplace?
Where will grief find its worth when the grace of solidarity
is so strong in each one of you?
Where will George sleep in dignity if you keep feeling restless?

America, you have shown your unity and the strength you hold in your bosoms;
you have raised your voices and protested for days altogether,
you have been there hungry and seeking justice for George
just like a brother and a sister would do and pursue,
and you have shown that you are that friend of that man
who was struggling under the knees of a policeman.

There is no deliberation that justice will not prevail
or that it will just perish from its epicentre,
there is no opportunity that life will not fulfill your expectations,
but there is someone out there in the skies waiting and watching
that you will respect your own existence and stop the chaos.

So be brave for George by asking God to grant him a place in heaven,
be bold to accept realities and seek the course of law for justice
for justice unto those who have lost their lives without a fair trial
will certainly ignite the duty of the nation to give justice
to those who were treated unjustly and denied of their rights.

Pray for George every time you feel a pain inside you for him
Pray for George when sadness makes you remember his agony
Pray for George that this day brings peace back to you
but pray for George so that in watching his country rise in peace again
he will feel and know never a black man will meet the same fate as his.

So, let's pray for George as he needs no one up there
in heaven except God and angels,
pray for George as he will want to be remembered
as a good man and not a provoker of violence,
pray for George for he will always be
in the minds of those men in blue uniforms and it will envisage
an alert in their minds that they will never do
unto any other human being what they did to George. 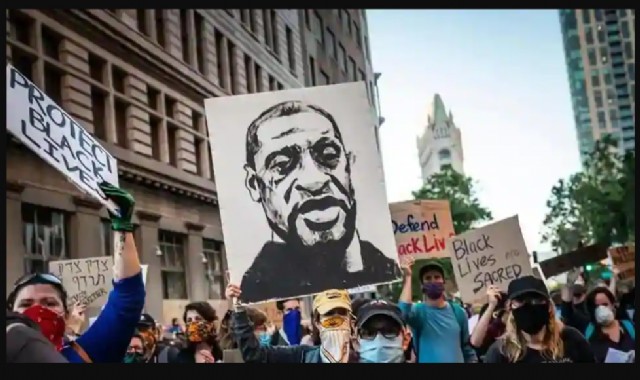 To believe in tomorrow! ! Yesterday is gone too soon with the wind! Able to accept all mankind on earth without racism; We are all human beings! ! ! ! ! Created by the Creator Almighty with the muse of love. Thanks for sharing this poem with us.

nuclear weapon, war for peace! plaintiff and disputatious RACISM! UNSEEN virus KILLER! country to country open secret superpower agree with disagree the peace in asylum- meditate on death orphanage homage vow all to it -promiscuous and wanton love just a body- chest and back bakes on secret roaring sun-moon

pray for George as he will want to be remembered as a good man and not a provoker of violence, pray for George for he will always be in the minds of those men in blue uniforms and it will envisage an alert in their minds that they will never do unto any other human being what they did to George. in this centuary, we have become animals. love in the heart was Jesus preached is what we have to aim at. tony

Very touching. Marvelous. But think about those who were repressed and harassed by Late George Floyd.

A glowing tribute to the memory of George Floyd, a vicmim of racial discrimination and brutality. A well deserved poem of the day.

An excellent tribute to a fallen hero! And let's all pray for that other cop who held George's back. Black cop holding down a black man so that a white cop can kill him. That black cop joined the police force to fight racism. Now he's charged with aiding and abetting in this truly senseless killing.

It's a beautiful poem that helps the heal the wounds and find peace amidst the chaos and hatred, Thank you for sharing dear poet.