Feel free to come back to the beginning.
Bring sandwiches and a flask of fresh black brew.
Remember your jacket and thermal underwear.
I'll bring some of her Turkish Delight.
Gently kiss our loved ones' lips, ignore any why's
whisper over teary eyes.
Put on Higgs Boson Blues while we still have time.
Rather save A Space Oddity for our return.

And no
not the beginning as described in previous poems.
We will find the first cause of this great little life.
This mysterious game of hide-and-seek called living.

"Watch out for cops behind the next super massive
hyperactive black hole, " says a returning pilgrim and supernova chaser.
We dodge the Great Attractor and look back at
Laniakea - a dancing river delta of light - our metropolis, which
envelops the Milky Way as a single shack -
pity that cameras cannot capture like our eyes.

We approach our destination, I believe.
Lips slightly parched and jackets wearing thin.
White beards longer than Gandalf's, even though
time is on the verge of its genesis.

Let us stand far enough to drink in all the action.

Ah, here we are, just outside the boundary of the unknown universe
as Google calls it.
"The perfect spot, " according to you.
"Let us sit on this dark cold bench, my friend, and linger a little longer.
All out of coffee? Perhaps it is time for our first cup of dark matter."

"Ha! "
The majestic explosion doesn't make a sound, except for what follows
- confirming my big bang theory -no words are spoken
but a universal guitar weeps.
The big picture settles, over time, like this poem, from where we sit munching cheese and tomato sandwiches and
drinking in the darkness.

I want to -
Feel my garden, our dogs' ears, the caress of the evening wind.
Touch her spaghetti strapped summer shoulders, whisper in her ear.
Asiago cheese, cherry tomatoes. Lemon iced tea.
Watch a white feather fall forever from a dove
as autumn light shrines through.
Listen to rain on leaves. Lie on the last green of the season.
Remember laughter from long ago.

I want to
look at the full moon dancing on the surface of my
steamy, black beverage. 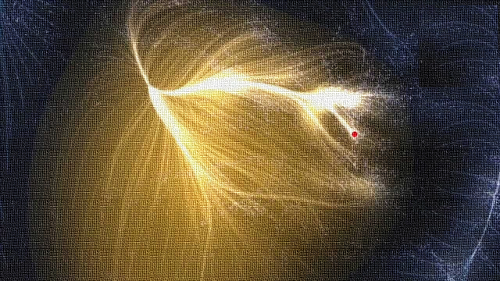 Werner Schmidt
Saturday, April 13, 2019
Topic(s) of this poem: astronomy ,stars
poem poems guitar Dogs
Download image of this poem.
Report this poem
Poems By Werner Schmidt
Late Morning Siesta
A Red Heart Rises
An Ode To Frowning Aka May I Have This Dance, My Dear?
Domestication
Treasure
See All Poems by Werner Schmidt
POET'S NOTES ABOUT THE POEM
Reading about Laniakea - 'immeasurable heavens' - I started thinking about a journey back to the beginning, with you.
COMMENTS OF THE POEM
See All Comments
Next Poem
20 / 41
Previous Poem