Columbus In The New World Poem by Dennis Spilchuk

Columbus In The New World

Three ships sailed under Spanish colors
(The Santa Maria, Niña and La Pinta)
And dropped anchor off the shores of San Salvador,
For Columbus and his crew to man-the-oars
To set foot on Terra firma in the New World;
Where they kissed the soil and thanked the Lord
After a so long, and terrifying voyage
Across ‘Mare Tenebrosum' for China.

Then, the quest for gold began in earnest
Of which Marco Polo wrote swelling the Orient.
Spain's King and Queen signed a contract entitling
The Genoese, a tenth of the profits after expenses.
And so they island hopped the Bahamas and Greater Antilles
Exploring and claiming lands for Spanish sovereignty,
Encountering natives and converting them to Catholicism,
But failure in their endeavors forced them homeward.

Subsequent voyages by the Spaniards to the West Indies,
Brought horror and sufferings for the Indigenous people
Of the Caribbean Islands and South America
Who were brutalized, enslaved and fraught with diseases
While their lands were stolen and culture decimated.
Sobriety in studies questions Columbus's legacy
Of arrival and contribution to the New World
That enriched the Europeans through exploitation.
***

Notes:
1) Christopher Columbus (1451-1506) : Christopher Columbus was an Italian (born in Genoa) sailor and explorer who made four voyages to the New World. Columbus is credited for opening up the New World to European influence and colonization.
2) San Salvador (Holy Savior) : San Salvador was the name given to the Island of Guanahani in the West Indies by Columbus when he and his crew first landed in the New World on October 12,1492; believed to be located in present day Bahamas.
3) Mare Tenebrosum: Latin - Sea of Darkness, referring to the Atlantic Ocean.
4) Cathay: China.
5) Spain's King and Queen in 1492: King Ferdinand II of Aragon (1452-1516) ; Queen Isabella I of Castile (1451-1504) . They married in 1469 and ruled Spain and Castile jointly from 1479 until their deaths.
6) Columbus Day: 'Columbus Day' in the United States of America is a national holiday observed on the second Monday in October, celebrating the arrival of Christopher Columbus in the New World on October 12,1492. 'Columbus Day' was designated a federal holiday by Franklin D. Roosevelt in 1937. On October 8,2021, President Joe Biden of the U.S.A. signed the proclamation recognizing 'Indigenous Peoples' Day' as a national holiday which falls on the same day as 'Columbus Day.' 'Columbus Day' is still a federal holiday, but states and local governments can choose to observe and celebrate 'Indigenous Peoples' Day' instead. 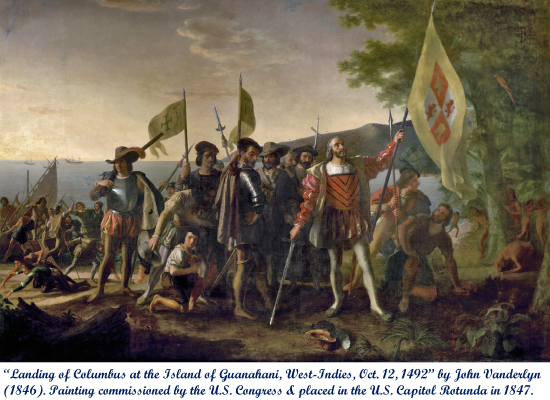